The Hummingbird update was a major rewrite of Google's search algorithm that endeavored to understand natural language and context.

What Is The Hummingbird Update?

The Hummingbird update is a significant update of Google’s search algorithm that focuses on interpreting natural language queries and the context of the words in a search string to deliver more accurate results and better satisfy searcher intent. Hummingbird wasn’t an addition to the existing algorithm like the previous Panda and Penguin updates; it was a complete overhaul, and even Google’s own Amit Singhal claimed that it was the largest rewrite of the algorithm since 2001.

Though it is already several years old and there have been many other changes layered onto the algorithm, the Hummingbird update played a fundamental role in revolutionizing Google Search. It changed search engine optimization and paved the way for the modern search landscape. Because it still remains relevant to this day, it’s crucial to understand what the Hummingbird update is, what it does, and its lasting impact on SEO, as well as search itself.

A Brief History of the Hummingbird Update

Google first announced Hummingbird on September 26, 2013, the 15th anniversary of Google Search, although it had already been in use for a month at that time. It came the wake of the infamous Panda and Penguin updates, which were launched in 2011 and 2012, respectively. These updates largely sought to penalize poor content and manipulative, black hat SEO tactics, such as private blog networks and link schemes.

Both of these algorithm updates had serious consequences for many websites, including significant loss of traffic and search rankings. However, they also placed much greater value on well-written content and organic, relevant backlinks, both of which are still crucial for SEO today. Hummingbird built off of the foundation laid by these updates to improve how Google connects searchers with these improved, higher-quality results.

Hummingbird changed the way that Google understands the language used in a searcher’s query. Previously, Google looked at the individual keywords in a query and returned results with the same or similar keywords on a page. How often you used a given keyword on a page — or a page’s keyword density — was more important than using your keywords naturally within your content.

The Hummingbird update began to examine how language was used in queries and on pages to better understand what information people were actually looking for. Instead of analyzing keywords individually to select results, Google now looks at what the keywords actually mean, including relevant context and the relationship between the words in a query. In this way, Google’s algorithm can learn more about language, how humans search for information, and what information they want — and solidify their position as the best search engine available.

In addition, Hummingbird also provided new comparison and filter features to the search engine results page (SERPs). Google launched the Knowledge Graph a year prior to Hummingbird, which this new update worked to build upon and improve. The Knowledge Graph may now show comparisons between two similar queries — such as comparing an orange to other types of citrus fruits — and allow users to filter from one thing to another. Again, this is all part of Google’s efforts to connect users with accurate information more efficiently.

The Rise of Semantic Search

The Hummingbird update is based on the concept of semantic search, or searching with meaning rather than literally matching-up words or phrases. Not only does this more accurately reflect how humans communicate, but it also makes Google more accessible for mobile and voice searches, as well as long-tail and conversational queries.

Hummingbird is an important precursor to future algorithm updates that focus on these features, such as Mobilegeddon and mobile-first indexing and design. In the Hummingbird announcement, Amit Singhal explains that “having a ‘conversation’ with Google should also be more natural.” Comparing strings of keywords isn’t much of a conversation and this method makes it far more difficult for people using their mobile device or voice to find meaningful information in the SERPs. Essentially, Hummingbird was necessary to improve the search experience for these users.

Mobile searches surpassed desktop searches in 2015, almost two years after Hummingbird’s implementation and shortly after the Mobilegeddon update. Google anticipated this shift and launched Hummingbird as a way to prepare for it and train the algorithm in advance. Because so much time has passed since Mobilegeddon, it’s easy to forget how dramatic the shift to semantic search really was; now, things like optimizing for mobile, responsive web design, and page speed are a given for effective SEO. Even years after the fact, it’s important to remember the role Hummingbird has played in the rise of mobile and voice search. Without this update to Google’s algorithm, semantic search might not be what it is today.

Read our comprehensive SEO keyword research guide to learn how you can get your web pages to show up higher in the SERPs.

Check out our ultimate link building guide to learn how to earn powerful backlinks to empower your web content in search.

Hummingbird didn’t have the same level of devastation on most websites around the web as previous algorithm updates did. In fact, it had already been in use for a month by the time Google announced the update, and, reportedly, many people didn’t notice any changes to their sites or performance.

For most people who are committed to white hat SEO practices and providing a great user experience, there isn’t much you need to do to optimize specifically for the Hummingbird update. You should focus on your content marketing efforts, and especially on creating high-quality content. Hummingbird has made optimizing for long-tail keywords and queries more important, rather than just head terms, but these keywords often present themselves organically within content written for users. If you feel as though you were negatively affected by the Hummingbird update — or any of Google’s algorithm changes, for that matter — you may want to consider enlisting the help of SEO experts to make any necessary adjustments to your site.

Local search results are one area where Hummingbird did have a large and noticeable effect. Primarily, it started to return more relevant results for searches with a local intent. For instance, if you search the term “weather,” you’re likely looking for the current forecast in your area and not a definition of that word. 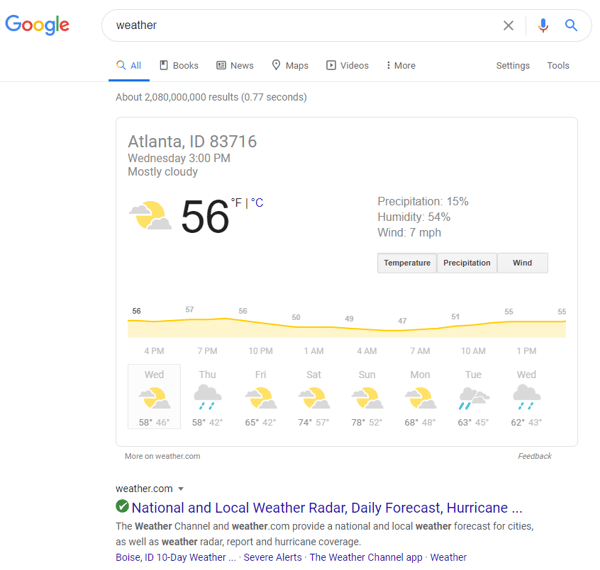 Previously, you may have only seen results that made use of the keyword “weather,” regardless of the information they actually contained. After Hummingbird, you see a SERP that’s better trying to satisfy your searcher intent and not just return results using that keyword. In an attempt to provide the information you’re searching for, you may see a variety of different results, including the definition of the word weather and the current forecast in your area. Further, depending on which results you interact with, you help train the algorithm to know what your intent behind the query “weather” is, leading to even better results in future searches.

The Legacy of the Hummingbird Update

Hummingbird still has major effects on the world of search to this day. Although several major algorithm updates have been released since, it’s hard not to notice the similarities between Hummingbird and one of Google’s latest major updates: Bidirectional Encoder Representations from Transformers (BERT). Much like how Hummingbird looked at context to determine searcher intent, BERT can “consider the full context of a word by looking at the words that come before and after it—particularly useful for understanding the intent behind search queries.” It can even see how prepositions affect the meaning of a word or phrase and understand the relationship between different words in a query.

BERT is powered by machine learning, which has played an increasingly important role in Google’s algorithm since they announced RankBrain in late 2015. Its purpose is to help users search for information in a way that feels natural to them, and to return more accurate, relevant results that better satisfy a searcher’s intent. Just as Hummingbird was a vital precursor for voice and mobile search, it also appears to be the foundation upon which the BERT update stands.

According to their announcement, Google does expect BERT to impact as many as one in 10 searches in the U.S., but it’s difficult to know exactly how this update will affect search in the future. It is abundantly clear, however, that BERT would not exist as it currently does without the Hummingbird update. Just like Hummingbird, BERT is hailed as “the biggest leap forward in the past five years, and one of the biggest leaps forward in the history of Search.” Understanding and satisfying searcher intent is, arguably, the entire point of search itself, and Hummingbird was Google’s revolutionary first step toward achieving that goal. The legacy of both of these truly historic updates will continue to affect search now and well into the future.