Want to Build Links? Let Your Customers Help You!

Even if you love your job, at some point in your tenure at your position, you have had a moment where you wished you could make someone else do your job for you. Not in the “automated cashier at the grocery store” kind of way: more like the Milli Vanilli kind of way. You want to garner the compensation whilst having others perform the grunt work.

I love link building. Although it’s hardly the industry I thought I would land in while I was pursuing my degree in journalism, it’s worked out great for me. It’s a creative workout for me.

In the best circumstance, obviously your site wouldn’t suck. Your site would have an extensive readership/customer base. Even though link building is still a rough trade when this is the case, having these readers/customers can prove to be advantageous to your link building efforts. Why? Because sometimes, you can get these people to do your work for you. Here’s how:

I don’t get to it every week, but I like to participate in the New Yorker’s caption contest as much as I can. After dozens of submissions, I have consistently failed to even crack the top three. I try not to get too upset: it took even the late, legendary film critic Roger Ebert about five years to be a finalist.

I don’t run my own blog. After writing ten hours a day at work, I find it difficult to muster up the energy to write even more web content when I get home. But let’s pretend for the purpose of this example that I do run a blog. I’ll call it “Jesse Stoler’s Blogroller.” Note: my inability to come up with a good title is another reason that keeps me from operating my own blog.

My blog would most likely be centered around reviewing my favorite cinema (it’s not like there are 8 billion of those blogs already). However, if I DID one day win the caption contest for The New Yorker, there’s not a doubt in my mind that I would interject my musings on Fellini and Polanski with a healthy dose of self-congratulation.

This is the power of a contest. I think of myself as a pretty modest guy, but I’m just like everyone else in that I will instinctively flex my ego muscle from time to time. It’s safe to say that when your customers win a contest you sponsored, they are going to want to tell their friends about it. If you build a page on your site devoted to announcing the winner, you are increasing your chances of having the winner link to that page, which will consequently drive traffic to your site in general.

Let’s say you operate an ecommerce site that sells custom sports jerseys like the following: 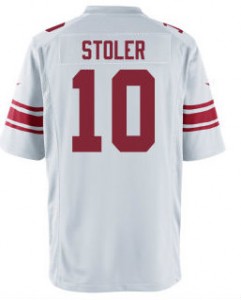 If I were the kind of man that bought custom jerseys, I would most likely get one from the New York Giants sporting Eli Manning’s number. I would then proceed to tell people that I was in a coma for the past two years, and don’t remember anything since his last Super Bowl win.

If you run the site that made this jersey, you could attach a note like this in the package the jersey came in:

Have a page on your site that is devoted to your customers wearing your product. If you have such a page, your customers might just link to their respective photo. For example: 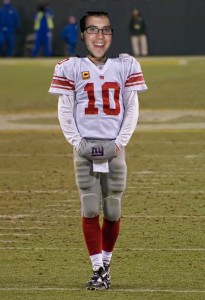 Thanks to jerseycity.com, I’m now a member of the Manning family!

Note for concerned readers: Thanks for the concern, but my left ear is intact. I’m just really bad at photoshop. I am not a Van Gogh at either design or aural dismemberment.

There’s a strong dose of irony in my giving you advice about writing thank you letters, mostly because I was the child that procrastinated until February to thank my relatives for Christmas presents.

In the years since I was nine, I’ve learned a few things, and the importance of a thank you note is one of them. Even though often you have given verbal signals that the gift you received is highly appreciated, the people who gave you the gift feel even better when there is documented evidence of your gratitude.

Of course, thank you letter season doesn’t only have to be in the 2-3 weeks following Christmas. If you’re running a business, it should be all year round. Sending thank you notes isn’t only a good PR move that will reflect your appreciation of your customers; it’s an opportunity for ample links.

It doesn’t have to be a spectacular thank you note. There’s no need to hire Theodore Twombly to write it for you. In fact, the note can be the same for every customer (different recipient name at the top obviously). All the note needs to accomplish is emphasizing your appreciation of the customer.

It’s simple, time-efficient and has potential for reward. There are a lot of brands out there that have a reputation for poor customer service. Gaining such a reputation can really deter the growth of your business. Even though consumers are more likely to share a negative customer experience as opposed to a positive one, some of your customers will take the time to express their enthusiasm for your brand. A thank you note may just be able to translate that enthusiasm into a link.

Empire Magazine is one of most well-known film publications in the world, one I read from time to time. That’s my way of saying that I’m not a subscriber; I don’t really know what their protocol is every time they gain a new subscriber. If they don’t do it already, one simple thing they could do is attach a thank you note to the first issue. If they have the profit margins to justify such an expenditure, perhaps they could offer a DVD/Blu-Ray of a film from their greatest movies of all time list; the film will come with the second issue.

I know if I were a new subscriber and I got a free film out of the deal, I would express my gratitude on Jesse Stoler’s Blogroller. I don’t hesitate in saying the countless amount of movie bloggers out there would do the same.

As valiant an effort you put forth to please all of your customers, pleasing 100% of them is frankly unrealistic.

This review can be found on the page for the 2013 Ford Edge on cars.com. If you scour the 80+ comments, you’ll find that the overwhelming majority of them are four to five star reviews. This just goes to show that no matter how reputable your brand is, there’s no pleasing everybody.

If there is only one person complaining, there’s really no need to address her/him. In fact, doing so could backfire.

There may come a time though where you’ve made a mistake on a large scale that leaves a large portion of your readers/customers upset. Every PR representative has nightmares about such a scenario. But while you’re addressing the PR fiasco, you might be able to convert said fiasco into link bait.

Let’s say you operated a site that sold refurbished Apple products. The site is called thebigapple.com. You may not be as “big” a deal as Apple itself, but you have a large enough consumer base; refurbished iPads are a hot item right now.

Apple has faced its share of controversies, many of which are on a grander scale than any ethical standards a corner store could violate. But let’s say you pulled an Amazon and sent your Christmas packages to your online buyers far too late. It’s a valid reason for your customers to be upset: Apple products are incredibly popular Christmas gifts.

Just like your customers appreciate a simple thank you, your customers will absolutely appreciate an apology. You have to act fast though, preferably within 24 hours of a brewing scandal. If you have a blog, put the apology at the very top of that blog. If you don’t have a blog, create a new page. Bothersome I know, but it will be worth the time investment.

Once such an apology is crafted, make sure your customers know you’ve taken the time to talk to them. This can be done a couple of ways:

If you expect this strategy to wholly fix your PR problem, you’re out of luck. It is, however, a first step, one that might actually squeeze some link juice as well. If the apology is sincere enough, it will have your customers sharing it and/or linking to it. Even if your customers aren’t the one building the links themselves, they will have started an online conversation that may just lead some news sites to link to you. A news source will be even more likely to link to your page if you are providing some sort of discount for your customers in conjunction with the apology.

Not only are all of these above tactics solid link building strategies, they are fundamental customer service practices as well. While you’re doing your best to keep the customer satisfied, bear in mind there are link opportunities that can be born.