Hello loyal Linkarati readers, and welcome to another edition of Tutorial Tuesday!

Each week we provide a step-by-step guide on various SEO tools, strategies, and processes. This week I’ll be stepping outside of strictly SEO to talk about a social media strategy (although SEO and social mix pretty well!).

Hello loyal Linkarati readers, and welcome to another edition of Tutorial Tuesday!

Each week we provide a step-by-step guide on various SEO tools, strategies, and processes. This week I’ll be stepping outside of strictly SEO to talk about a social media strategy (although SEO and social mix pretty well!).

Specifically, I will be discussing Twitter chats and the tool tchat.io. Participating in Twitter chats is one of the best ways to engage with others online and grow your social influence, and tchat.io makes taking part in these conversations a breeze!

Without further ado, let’s get started with the tutorial.

Step One: Login to tchat.io

Start by heading to tchat.io. Here is what the home page looks like: 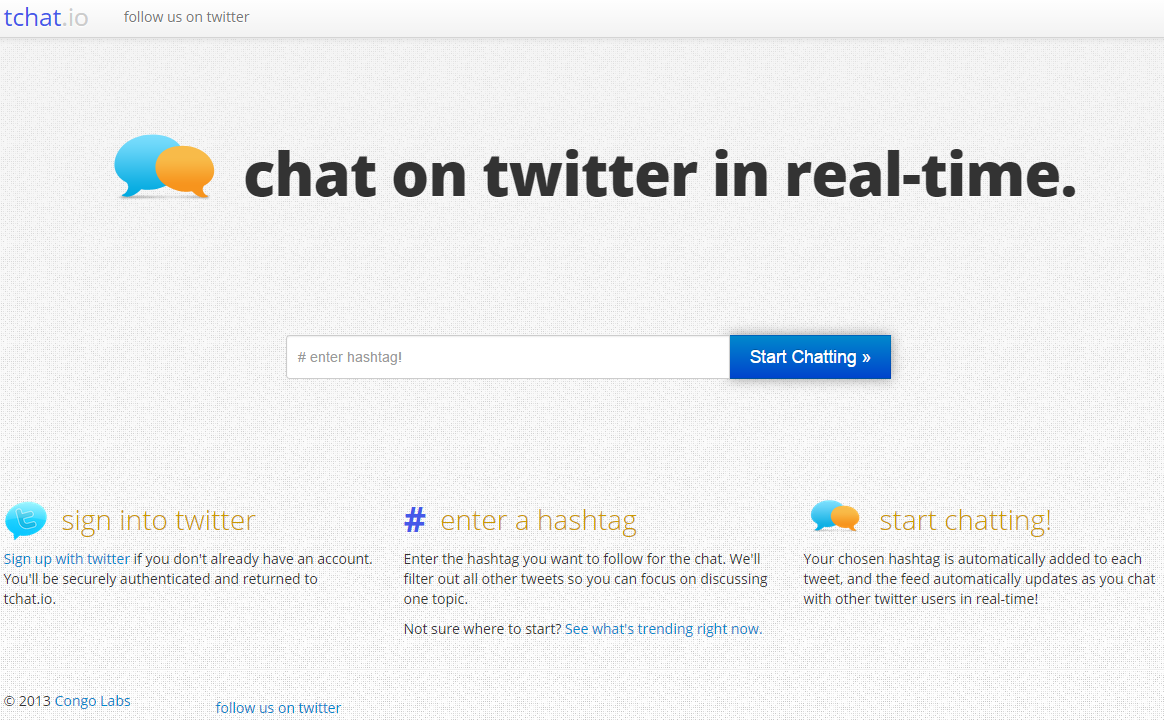 Upon arriving at the home page, there are a few items worth checking out before you start chatting.

First off, if you don’t already have a Twitter account (which would make it awfully difficult to do Twitter chats), tchat.io provides a link to where you can create one: 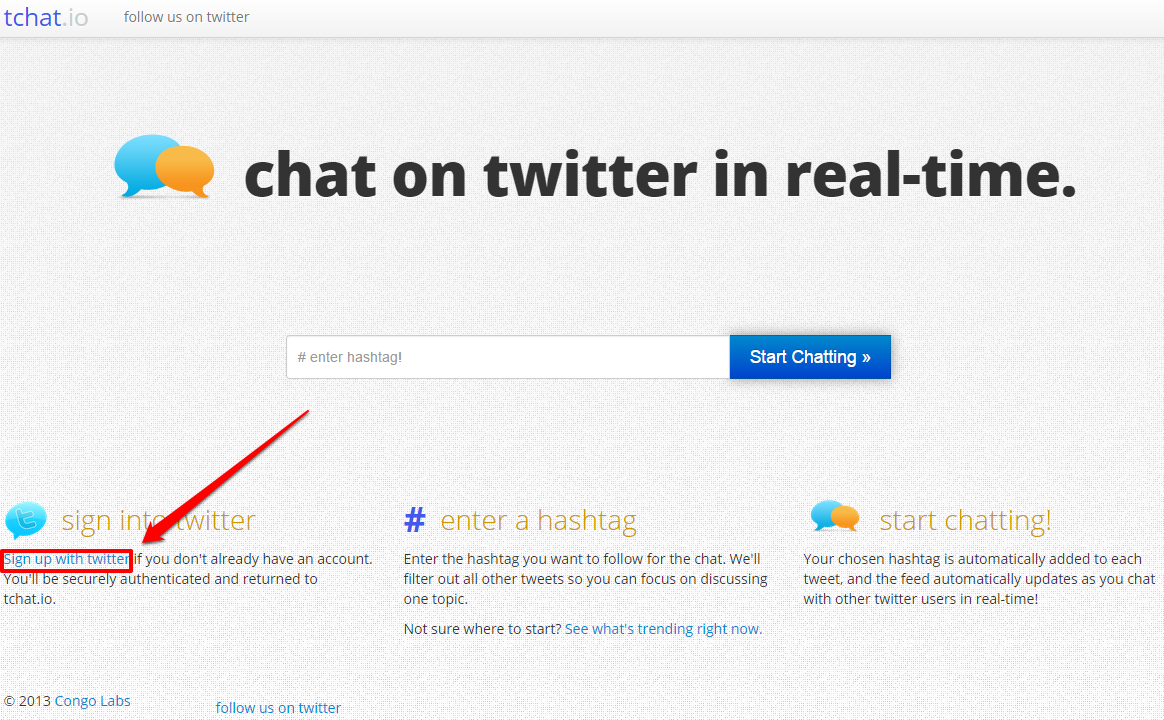 Tchat.io also offers a link to see what is currently trending on Twitter: 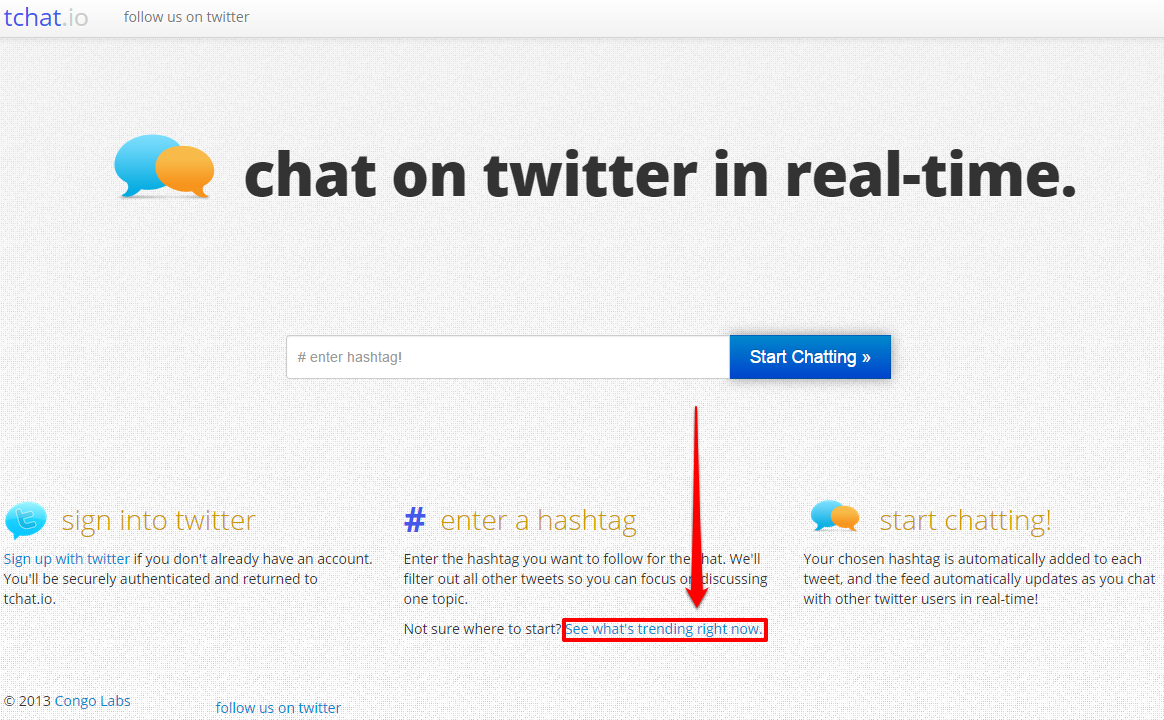 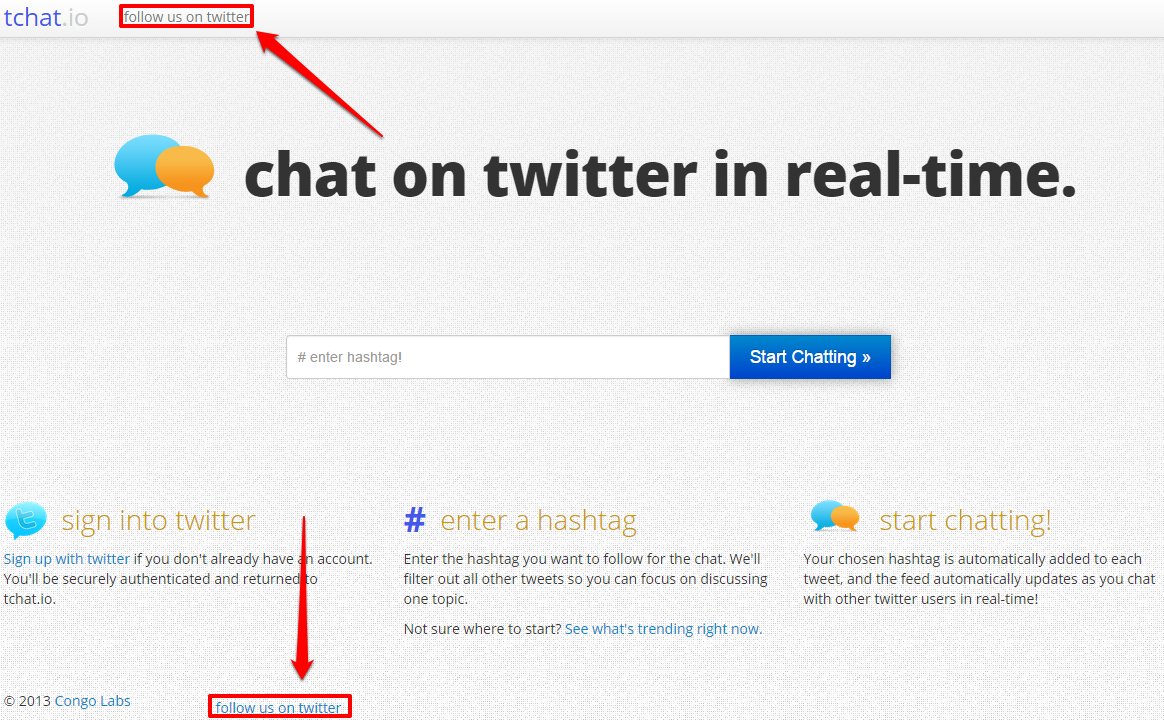 I would recommend following the tchat.io Twitter handle as it provides updates on new features for the tool and notifies you if there are any technical issues occurring.

But getting back to using the tool for Twitter chats: start by entering the corresponding hashtag into the box and click “Start Chatting”. 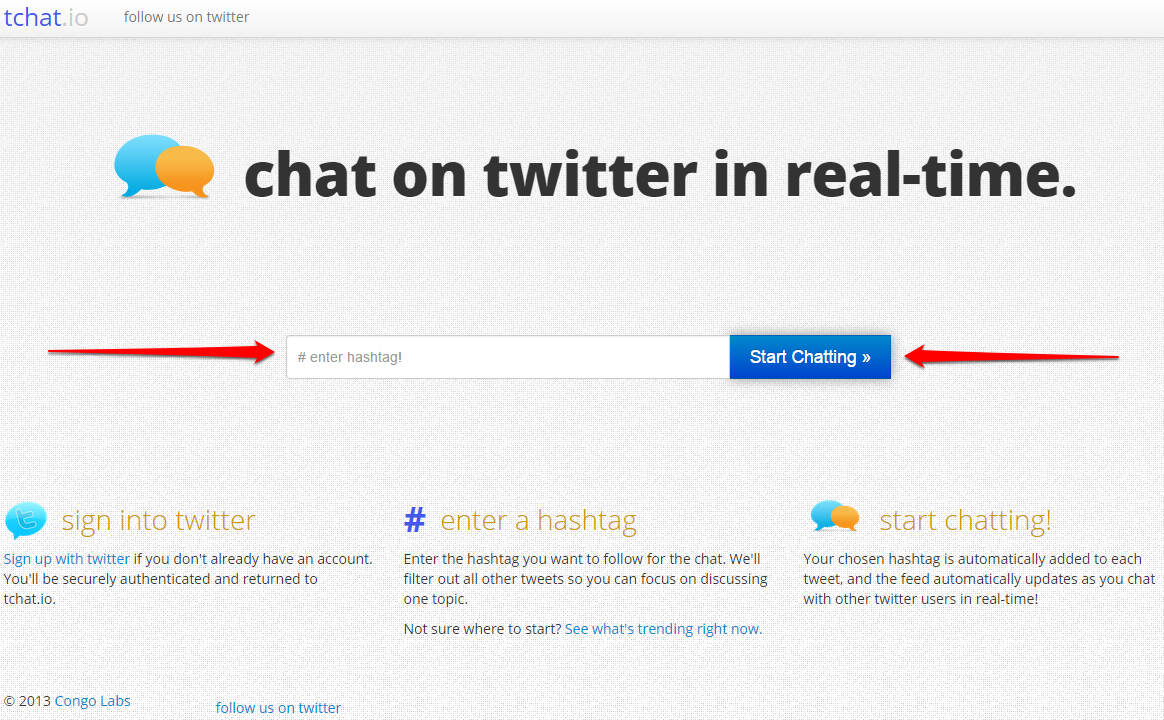 For this tutorial I am going to use our very own #LinkaratiChat! Here is what the page looks like after I input #LinkaratiChat and click the “Start Chatting” button: Tchat makes it much simpler and easier to keep up with a Twitter chat because it updates in real-time, much faster than Twitter. Before you start chatting however, you’ll need to sign into your Twitter account, which can be done in two different places: 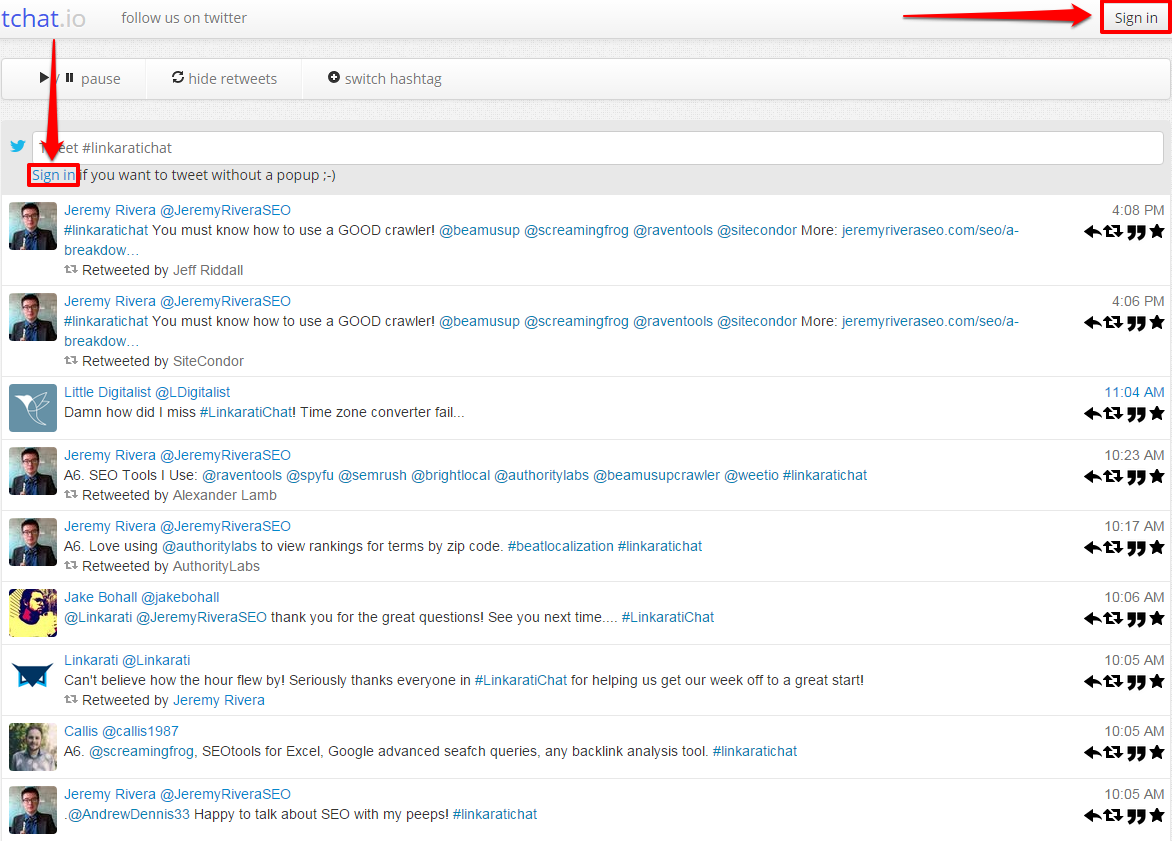 Signing in is easy as - just click one of the links pictured above and authorize the app on this page: 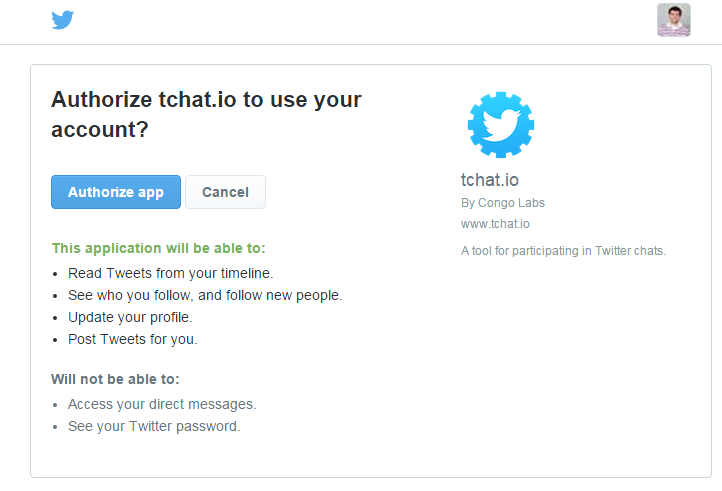 Once you authorize the app you’ll be redirected back to the chat stream.

Now you’re ready to engage like a boss in the Twitter chat. Not only does tchat update faster than a normal Twitter feed, but it also allows you to “pause” your feed if things get too crazy: 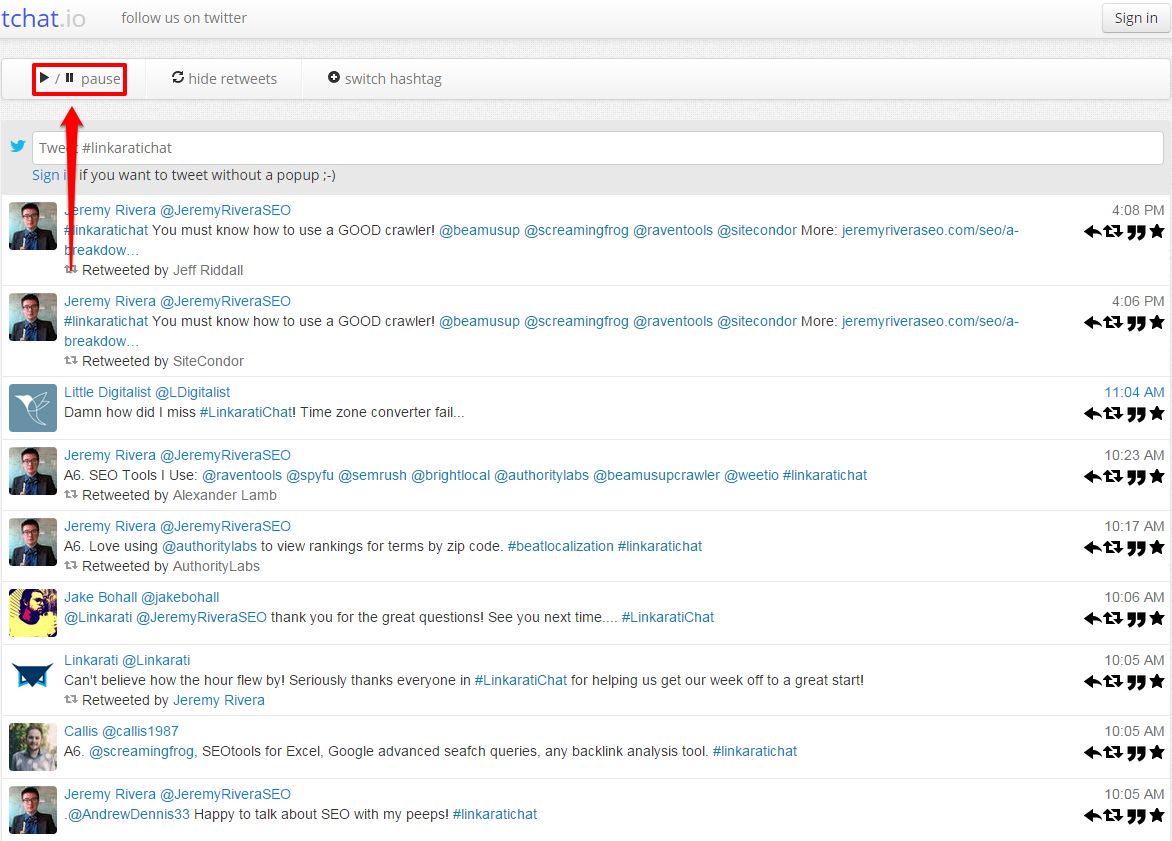 Pausing the stream will allow you to catch up with the discussion if you fall behind. Once you’re caught up, click play to get the stream updating again in real-time. Don’t leave it paused for too long – just because the conversation stops on your screen doesn’t mean it’s stopped on Twitter! Tchat also provides timestamps on each tweet so you know exactly what’s being said and when: 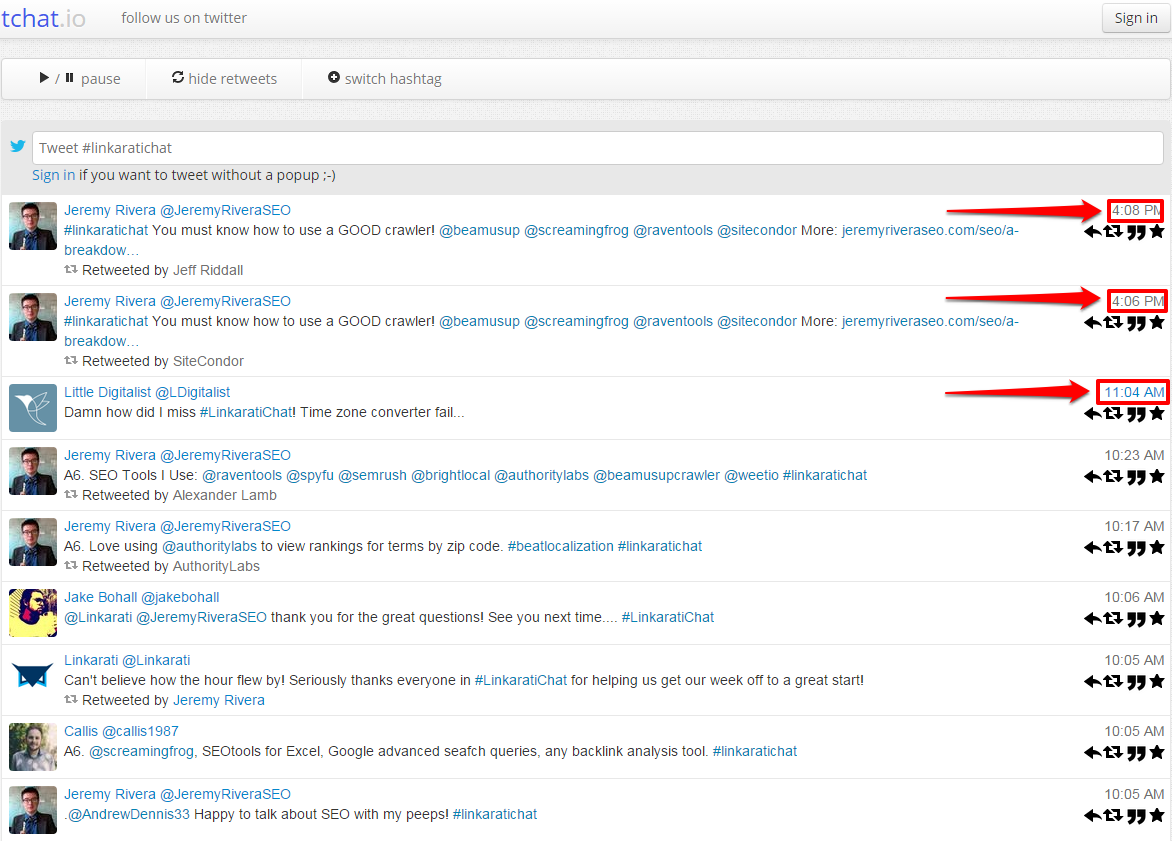 You can also see Retweets popping up in the stream, and who Retweeted them: 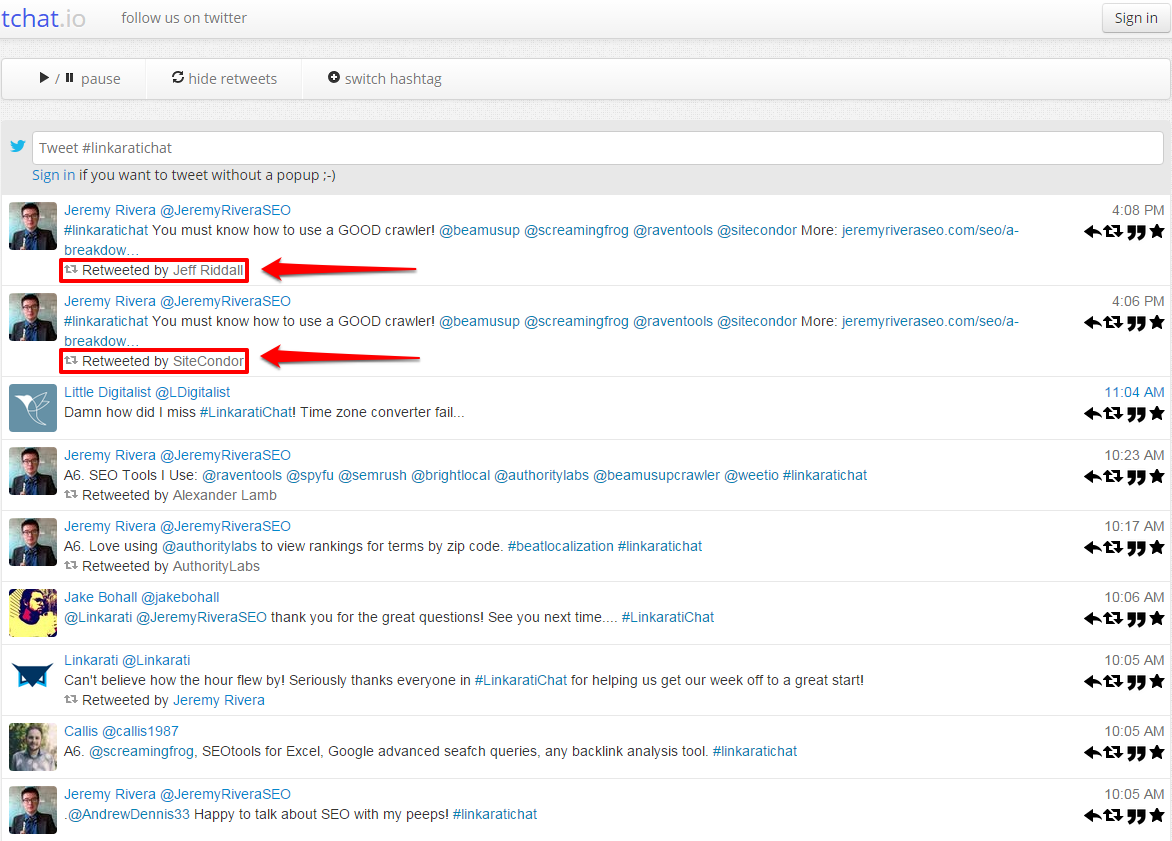 Of course, Tchat offers an option to hide Retweets if you don’t want them to show up: 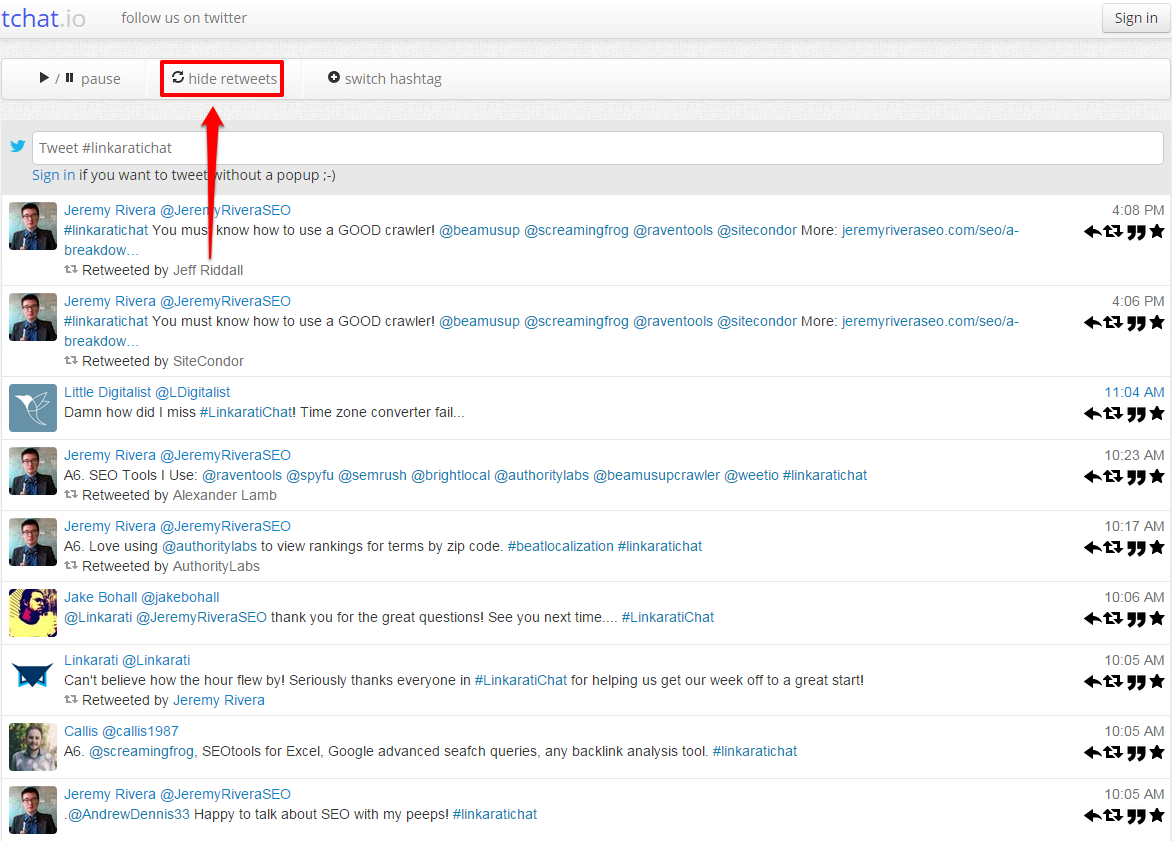 Tchat even provides a button to switch hashtags if you get bored of #LinkaratiChat (which would clearly never happen) or want to hop into another chat after it ends. 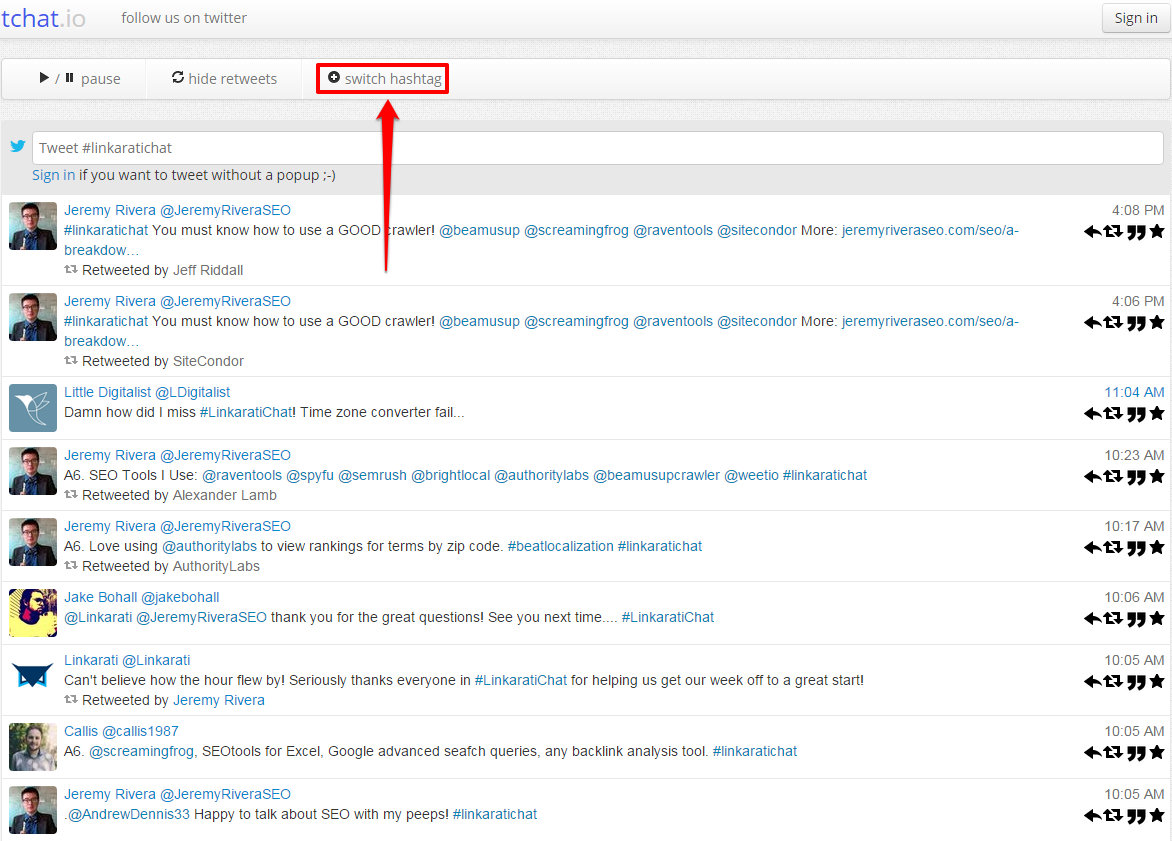 The main purpose of Twitter chats is to engage with others around a common topic of interest, and tchat makes that process easier.

Within the tchat stream you can easily reply to other people’s tweets: 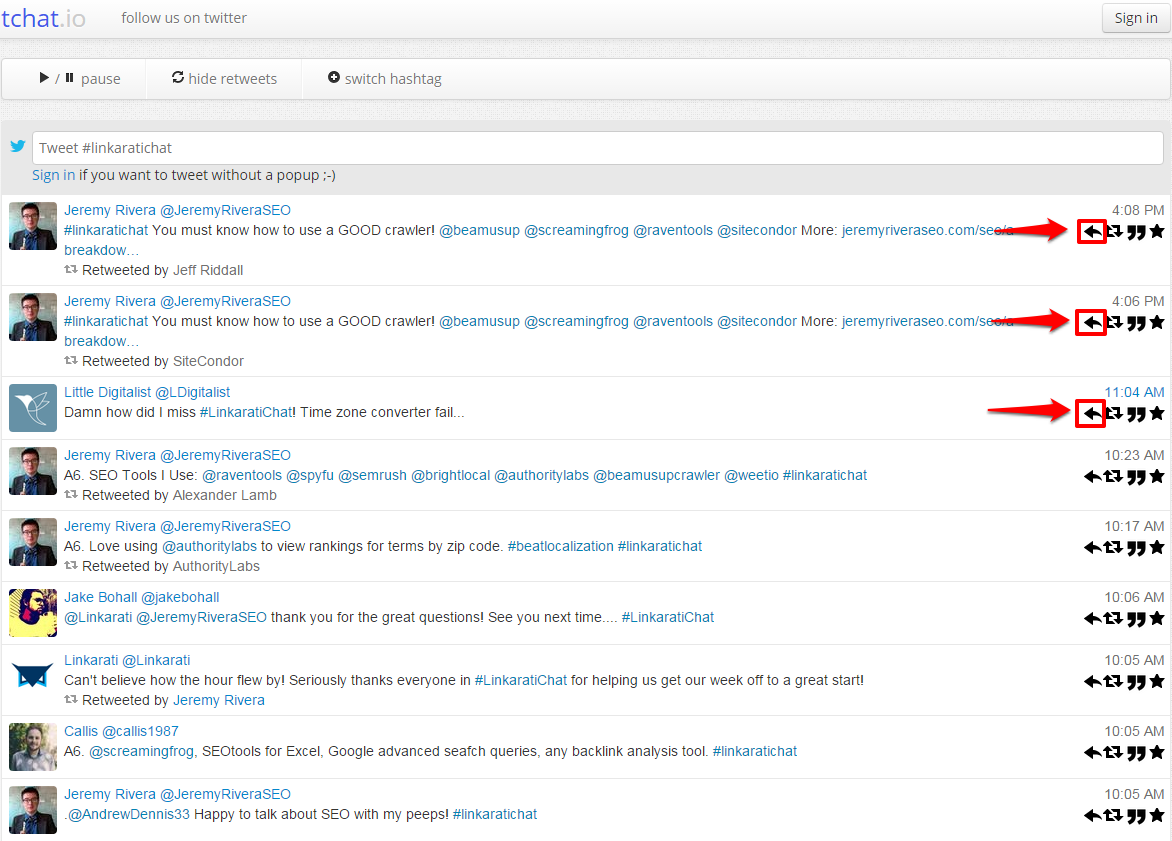 If you click reply, tchat will automatically include all the corresponding handles from the tweet you’re replying to in the text box above the stream.

For example if I reply to this tweet from Jeremy Rivera: 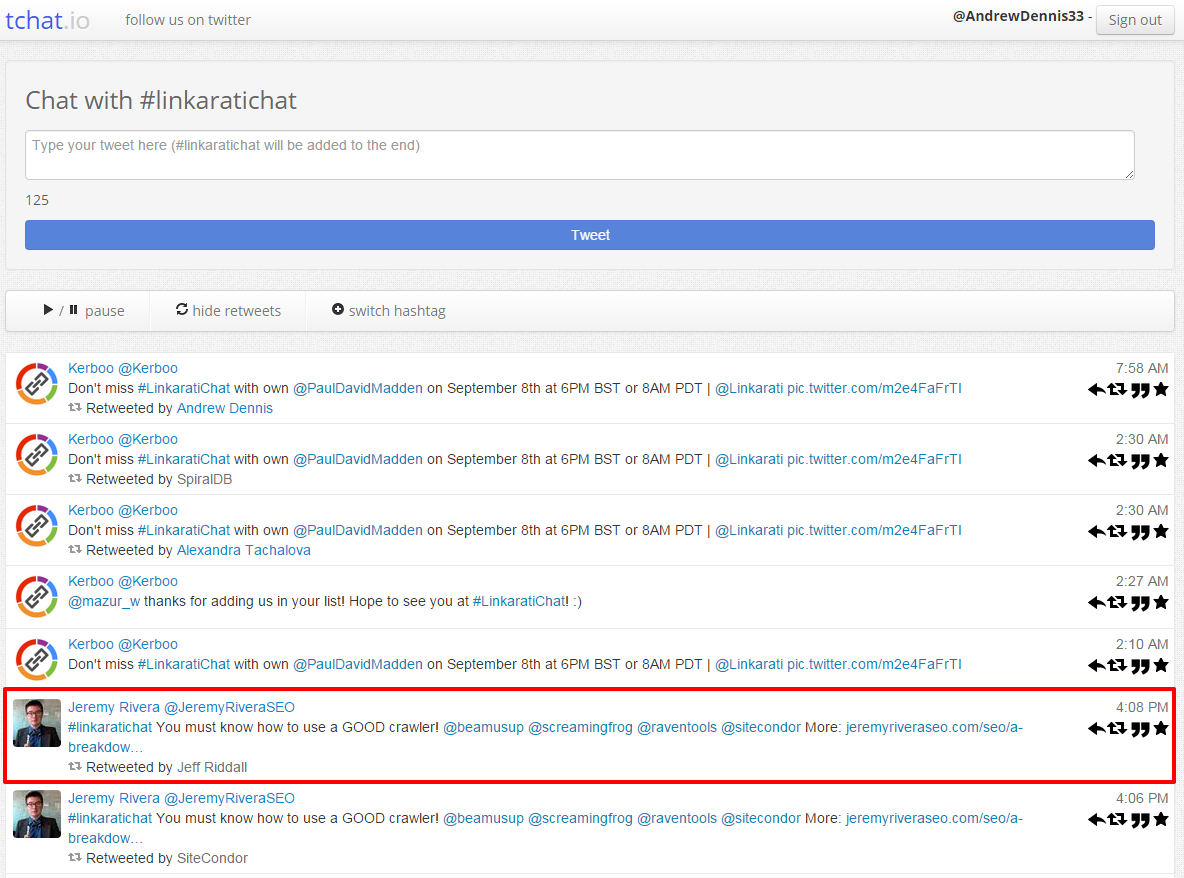 Tchat populates all the handles from Jeremy’s tweet (including his of course) into the text box so I can tweet back to him: 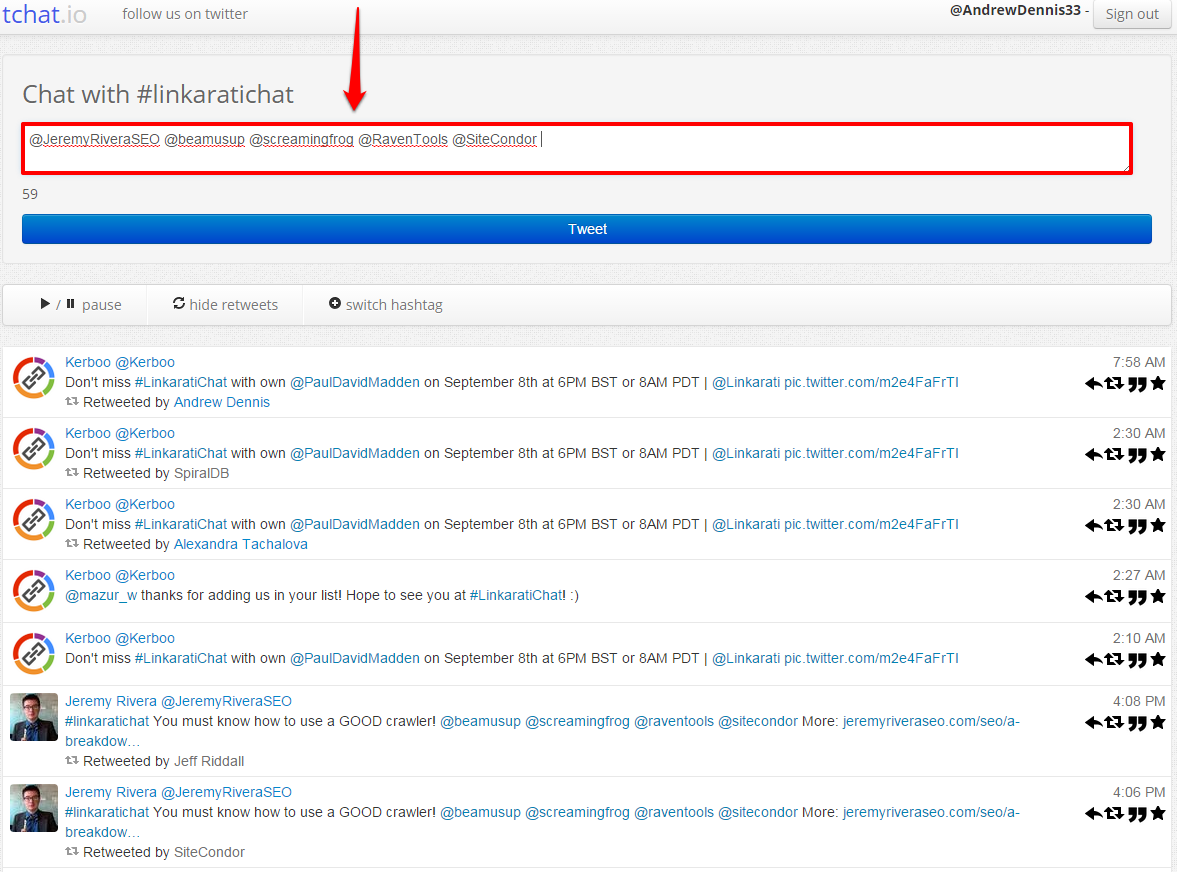 Also worth noting is that tchat will automatically insert the appropriate hashtag on the end of any tweets I compose within this box.

Along with replying to tweets, tchat includes the ability to retweet people: 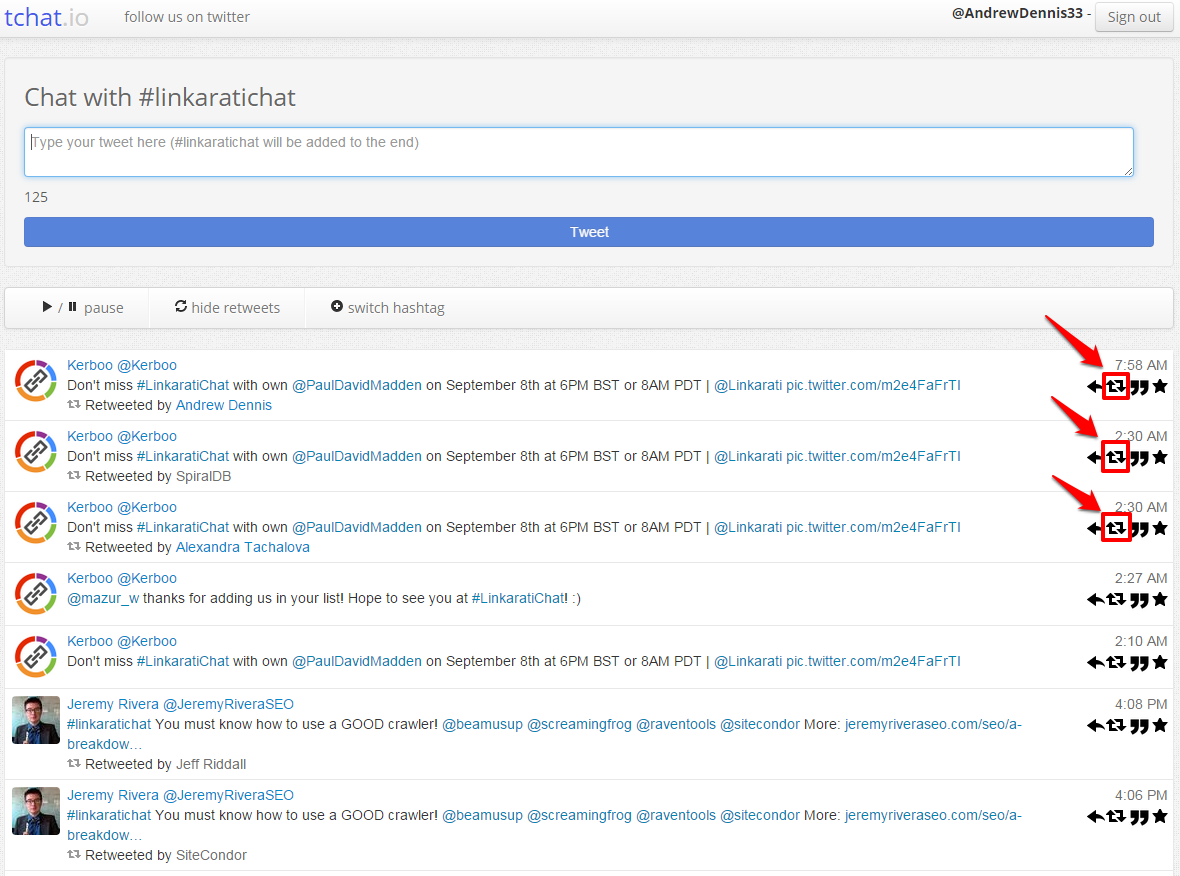 As well as “Quote” them (similar to a retweet): 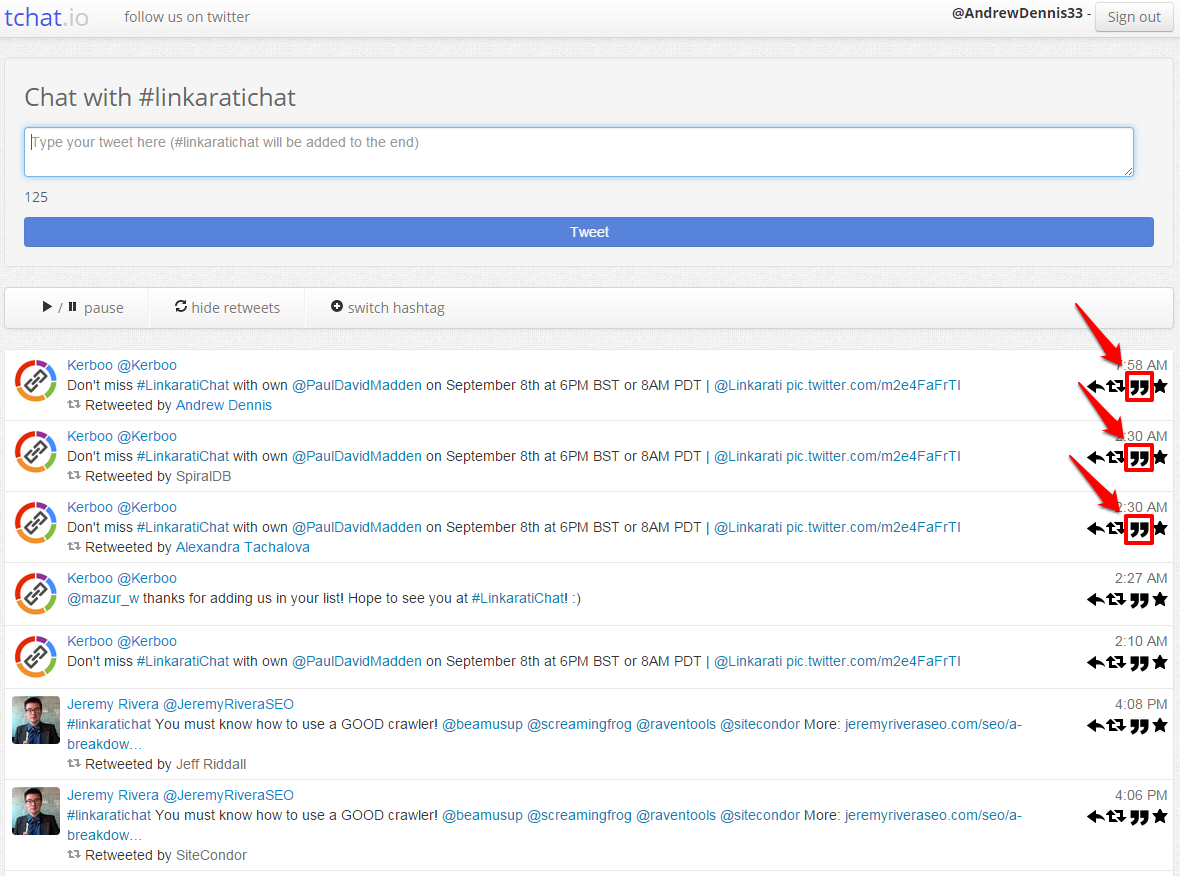 And tchat provides an icon to easily and quickly favorite tweets: 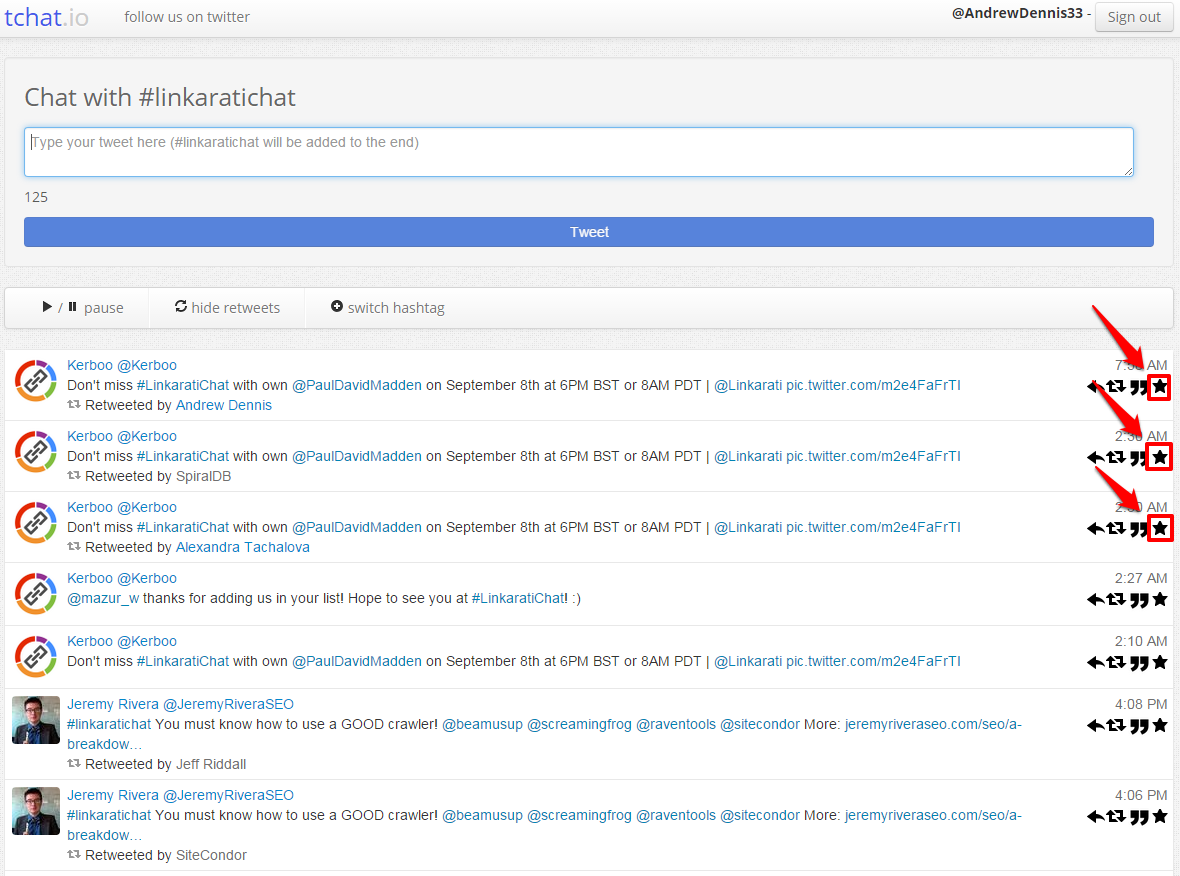 All of these icons make it simple and easy to engage with others during a Twitter chat while also keeping up with the conversation. Of course you’ll want to contribute some tweets of your own as well.

Lastly, tchat makes it easy for you to share tweets of your own.

You can compose tweets within the text box above the live stream: 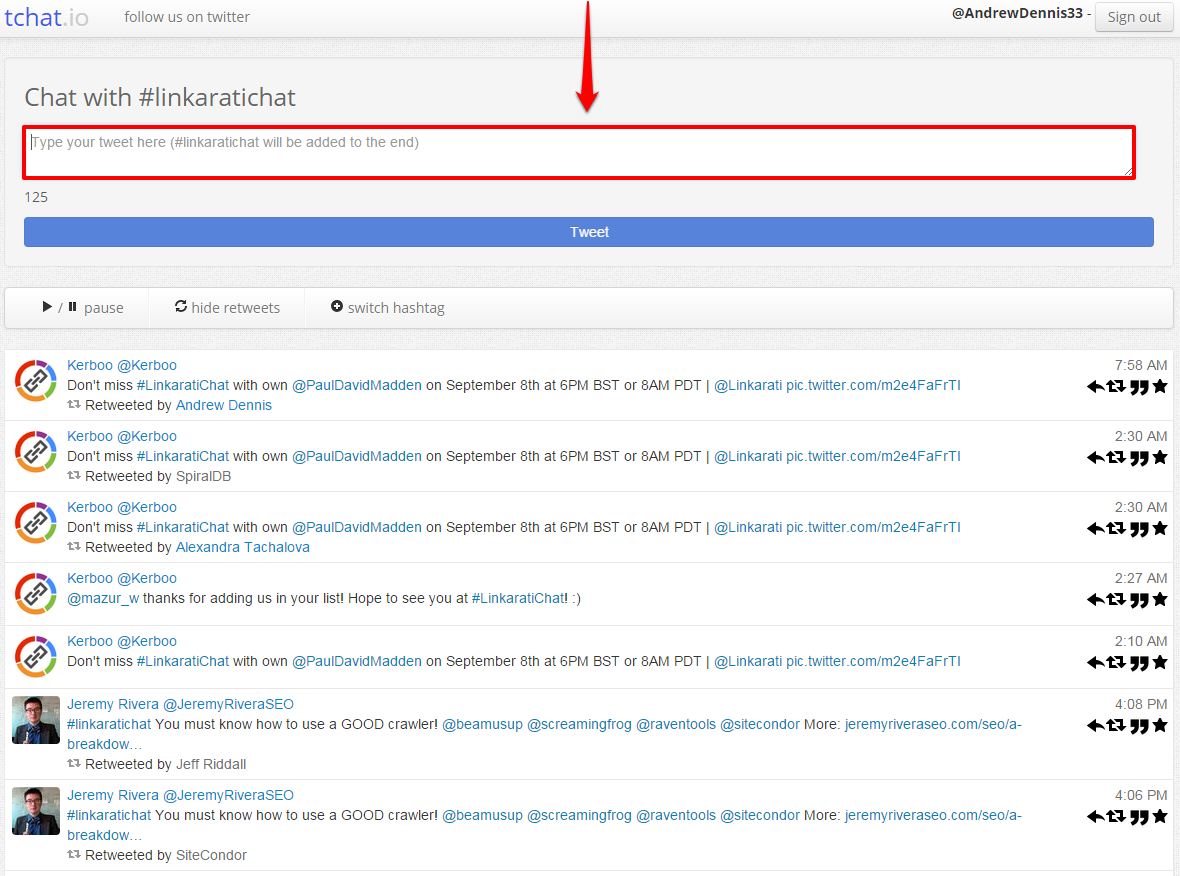 Tchat will automatically tack on “#linkaratichat” to the end of every tweet typed in this box. This has been one of the most useful features for me personally as I often would forget to include the chat hashtags in my tweets prior to using tchat.

The tool also provides a character counter to help me ensure my tweets fit within Twitter’s 140 character limit (the chat hashtag is included in this count). 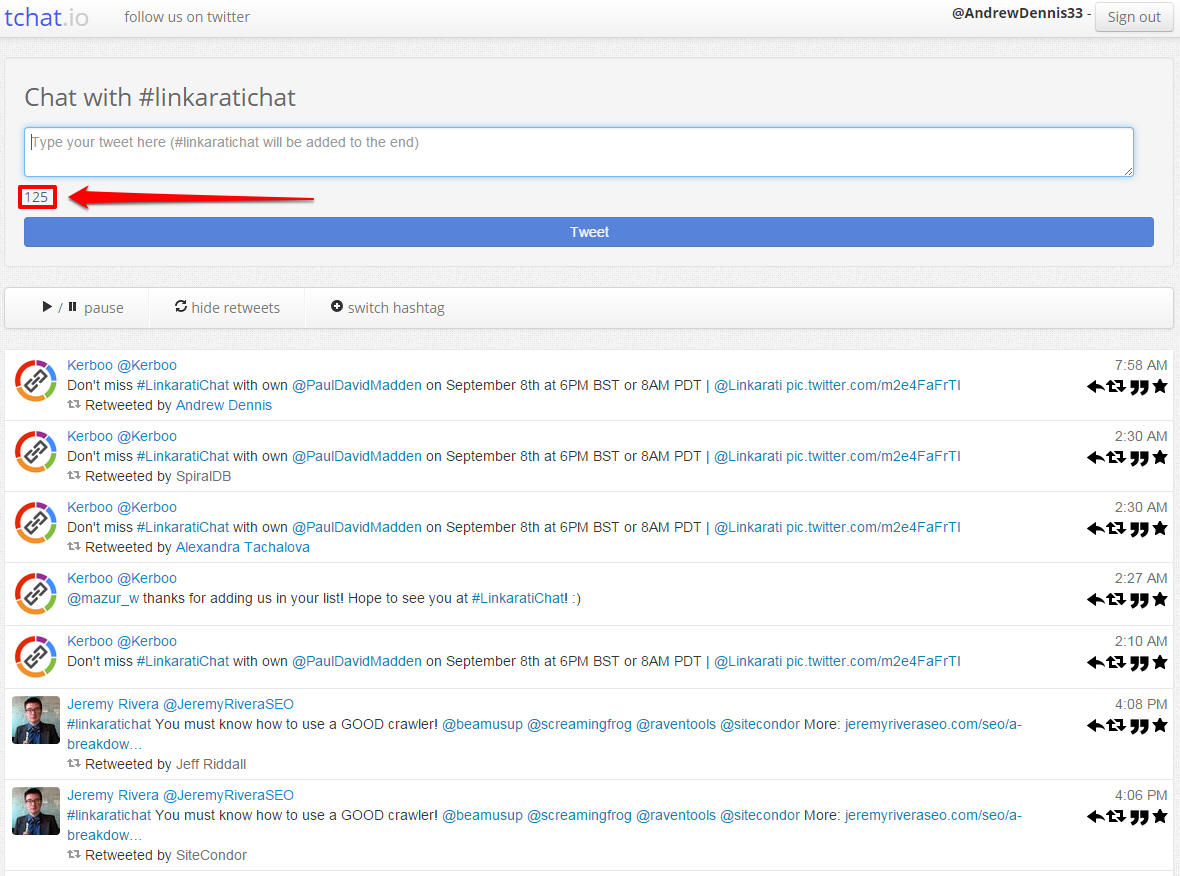 Tchat makes it easy and straightforward to compose tweets and join the conversation during a Twitter chat!

Twitter chats present great opportunities to engage with peers and discuss important industry topics. However, these chats can at times get so big that they become unwieldy and hard to follow.

Fortunately, tchat.io makes participating in Twitter chats much easier so I can focus on adding value to the conversation rather than trying to frantically update my Twitter feed.