As an SEO, I’ve dug through the trenches of link building. I know and appreciate the struggle SEOs face to secure links. But recently I was the victim of a tactic I still can't believe exists.

Last month I stumbled upon a mind-blowing tactic that another less scrupulous SEO adopted to build quality links for sites who might not have earned them:  authority hijacking.

As an SEO, I’ve dug through the trenches of link building. I know and appreciate the struggle SEOs face to secure links. But recently I was the victim of a tactic I still can't believe exists.

I mean, I’ve brainstormed and implemented campaigns where we scurried to pull in eight to ten links for clients whose websites didn't offer linkable content. I know these types of campaigns require creativity to justify why another website would want to link to our site. Depending on the influence of the brand this can be an almost impossible task.

But there's a line between creativity and maliciousness.

Last month I stumbled upon a mind-blowing tactic that another less scrupulous SEO adopted to build quality links for sites who might not have earned them: authority hijacking. Authority hijacking is when a link builder misappropriates a writer’s name, credentials, pictures, and contacts to write articles or suggest resources in order to decrease the time it takes to build links. 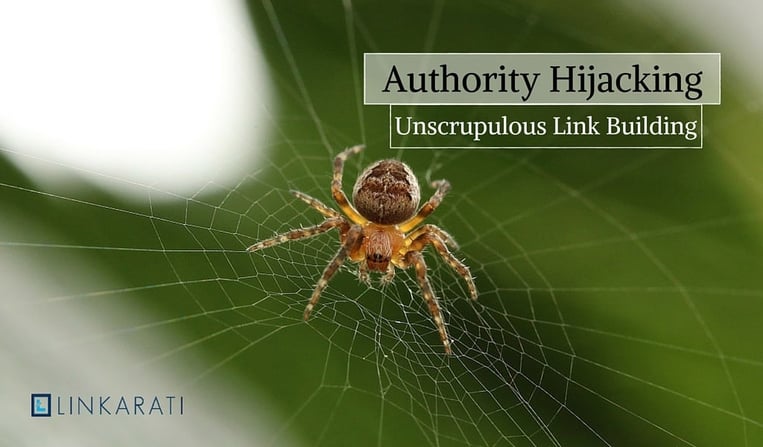 Recently, the author profile I have spent the last two years building was targeted by an authority hijacker.

A nameless, faceless SEO had created their own version of my email utilizing the email service Mail.com. The sneaky individual banked on editors I had already contacted not realizing that my email had changed from @gmail to @mail. Once their new email was set up, they contacted an editor I had worked with in the past and successfully convinced her to publish an article that had links to two of their clients.

Don't resort to authority hijacking! Learn to build your own links with our free ebook:

The Many Down Falls of Link Hijacking

This tactic, while quick, does not lend well to links that will stick long-term. The authority hijacker had a very short victory. Less than ten hours after the article was published:

But wait, you might be thinking, one incompetent authority hijacker doesn’t mean that the tactic can’t be productive. The failure could just be chalked up to targeting the wrong site and the wrong person. Before you delve the dark path of authority hijacking, here are three very good reasons to steer clear.

Reason One: Stealing an Identity is Morally Reprehensible

We’ll start with the argument all of the do-gooders--who have not been jaded by digging through the trenches of the web--might be thinking: stealing someone’s identity is ethically and morally reprehensible. At the core of online impersonation is the fact that the impersonator is willfully pirating someone’s brand and image.

We’re just borrowing, an SEO who wants to take short-cuts might rationalize.

But that's not true. Borrowing doesn’t lead to the target of the tactic feeling violated. And this type of borrowing involves SEOs endorsing clients and writing articles about topics that may go against the individual’s personal brand. And if you screw up when outreaching a site, you might receive the angry email, but the person whose identity you've stolen will pay the long-term consequences.

We might not all know each other personally, but SEOs should be willing to pay the consequences of their own actions.

Let’s go beyond ethics. Authority hijackers can very easily destroy the delicate internet eco-system. The SEO industry is still struggling to overcome the dark age of link building. We all know or lived through the story – a few enterprising individuals built their empires on spammy links, unnatural anchor text, and spun articles.

Times changed. The industry changed. Many link builders have created strict codes to ensure relevance and quality standards are met. Despite these changes SEOs are still treated like con artists who are out to spam and manipulate the web.

Years, maybe decades, will pass before we shake that stigma. If authority hijacking continues to happen, site owners will become even more suspicious. Best case, the reputation of SEO and link builders will be further damaged. Worst case, site owners and active members of the web will conflate SEO and link building with illegal activities. Either circumstance is not ideal.

Let’s tackle the final reason SEOs should steer clear of authority hijacking: stealing someone’s identity online is illegal in some regions of the United States. In most states, identity theft law has not caught up with the rampant identity theft that takes place on the internet. Right now the only way unscrupulous individuals can be sued for online identity theft is if they have committed a crime.

Three states (Texas, New York, and California) have recently made online identity theft a crime. In New York and California, authority hijacking will earn you a misdemeanor and up to a year in jail. Unlucky sods who try the tactic in Texas could be facing down a third-degree felony and up to ten years in prison.

Slowly, the rest of the union will follow suit. By the five to ten year mark, I wouldn’t be surprised if everyone in the United States who engages in this tactic could be facing down a potential criminal charge. I’d do almost anything for links (but I won’t do jail-time).

SEOs face a very long career filled with difficult clients and underdeveloped websites. At our darkest hours, it can be easy to seek easier methods to acquire links. Out of this darkness authority hijacking was born. As an industry, we should slap this tactic with a black hat label and shun all who practice it. Our industry would be better served if we earn links the hard way.

Popular Related Posts
Google’s Love/Hate Relationship with Links
Tales from Sales: Everything You're Doing Wrong in Your Quest for Links
Identifying Linkable Assets: Building a Strategy for Success
Larraine Staufenberg

Larraine Staufenberg is an SEO at Page One Power. She has two and a half years of experience banging her head against the wall when faced with difficult clients. Larraine spends her free time trying to resist the urge to buy board games and occasionally testing out new recipes.