A drop in visitors to your site can be one of the first indicators that something is awry with your optimization. From technical errors to regular updates to the Google algorithm, there can be many possible reasons behind a traffic loss. By discovering the cause of the drop, you can begin to optimize and regain your losses.

Has your website seen a decline in traffic? Here are several of the most common culprits.

This type of penalty is less common than it used to be a few years ago. Still, if your site has seen declines in traffic, one of the first places to look for a problem is in Google Search Console → Search Traffic → Manual Actions.

Google often makes significant changes to their algorithm that can negatively impact many sites. Google’s Panda algorithm, first released in 2011, had a drastic impact on the traffic of many low-quality websites. Google’s Penguin algorithm, which launched in 2012, initially penalized websites that were deemed to have a large number of backlinks created solely for SEO purposes.

Now, both Panda and Penguin are a part of Google’s main algorithms. In the past, when these algorithms would run only several times per year, it was easy for us to diagnose whether a site had been hit by a Panda or Penguin update.

These days, we tend not to see obvious Panda and Penguin updates. Rather, most of the impactful updates that Google runs are what we call “core quality updates.” In some cases, we can document known or suspected updates to the core quality algorithm.

In order to determine if your website saw drops because of an update to Google’s quality algorithms, you will need to look at Google organic traffic. In Google Analytics, you can do this by going to Acquisition → Source/Medium and selecting Google/organic. You’ll then be able to see if significant, sustained traffic drops have happened that coincide with known or suspected algorithm updates. 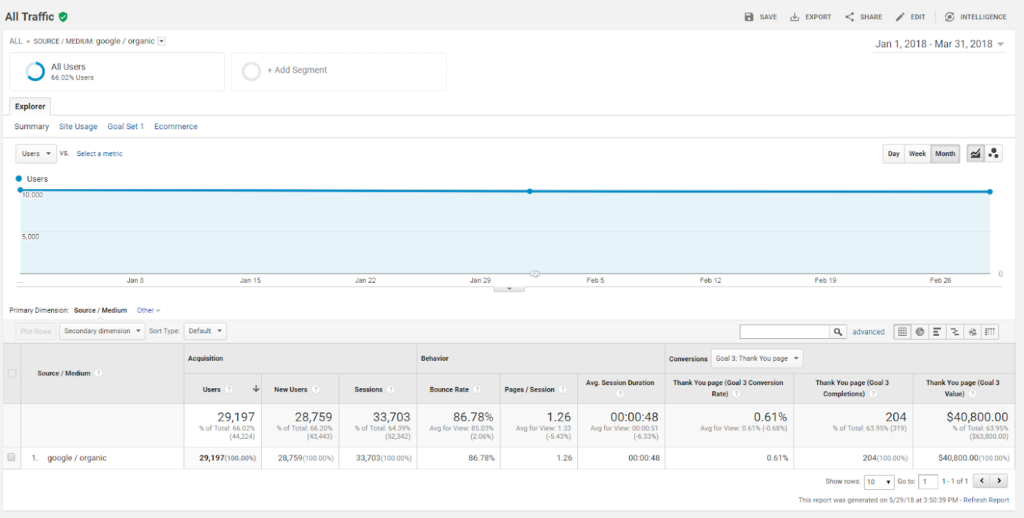 Here are two resources you can use:

The author of this post has a list which details most of the suspected updates as well: https://mariehaynes.com/algo.

In order to determine whether significant changes have been made, you can look at previous versions of the site on archive.org.

Migration from HTTP to HTTPS is equivalent to a domain name change. Even if done correctly, many sites will see a temporary dip in rankings after an HTTPS migration. Most sites recover within a few weeks, or, if it is a large site, it can take a few months for recovery to fully happen.

5 Loss of a Honeymoon Boost

It is not uncommon for a new site to rank quite well for several months, then start to see declines as Google determines their true rankings. If your site is seeing traffic drops and is less than six months old, there is a good chance that you had received an extra boost after first appearing on the scene and have now lost the boost.

The new Penguin algorithm is really good at just ignoring links that Google would consider unnatural. However, there is a strong possibility that there are other algorithms that can algorithmically demote a website if it is detected that the site has been creating a large number of manipulative links. If you think this is the case for you, diligent use of Google’s disavow tool may help.

This is by far the most common reason for a site to see traffic drops.

Google is getting better and better at determining which websites are truly doing the best job at helping searchers. If you’ve lost rankings, it’s highly recommended to have several people who are not emotionally connected to your business review both your site and your competitors’ sites and give their opinion on whether your site truly is the best result for those searching for your top keywords.

In the past, we could take a mediocre site and, with enough link building and on-page tweaking, we could make it rank well. But now, the key to being ranked #1 is to truly be the best option for searchers. If you have relied on tricks and loopholes to rank in the past, there is a good chance that Google is no longer rewarding those tactics.

Marie Haynes is completely obsessed with understanding Google’s algorithm changes such as the Penguin algorithm and the Panda algorithm as well as Google Penalties. For the last 10 years, she has been helping businesses learn how to improve their Google presence in ways that comply with Google’s Guidelines.