You Want to See Voter Fraud? Google It

I spend a lot of my recreational time reading news and political journals. Maybe you’re not like me (and for your sake I hope that’s the case), but if you are you have become very familiar with the term “voter fraud.”

Since the 2010 midterm elections, there has been a rapidly growing and successful movement to pass legislation that would ostensibly lessen the incidents of voter fraud.

Fighting voter fraud sounds pretty noble on the surface. Nobody wants a government rife with voter fraud, although I’m sure a certain President of Zimbabwe doesn’t mind it one bit.

I’m not an anchor on MSNBC; I’m not going to tell you that voter fraud is a completely non-existent problem. Voter fraud does happen.

The question then becomes at what scale does the fraud happen and what is the proportionally appropriate response. Personally, I feel the movement has gone completely overboard, and is risking the disenfranchisement of millions of Americans our democracy needs to protect.

I’m an SEO, so I relate to this current debate. I see voter fraud all of the time. Where exactly do I see it?

Spammers abuse the democracy of Google vociferously. I can’t defend that. I’m on the side of Google doesn’t owe SEOs anything really. That said, like the 41 states that have passed or debated legislation that have compromised voting rights, I believe Google can overreact and unjustly penalize people they should be interested in protecting.

How Do You Vote in Google?

No, this has nothing to do with American Idol. I have no interest in telling you how to vote for that show. Few things have caused me to lose more faith in the American electorate than Jennifer Hudson’s seventh place finish during the 2004 season.

What I DO know is that quality backlinks are an important signal in the algorithm. I know this because Amit Singhal and Matt Cutts--the head of search and webspam, respectively-- have said as much, and I feel safe in saying that they are experts in the matter.

A link from site A to site B is a vote on the part of site A. The more votes that site B can tally from relevant, authority sites, the more likely it is to be propelled on the SERPs. A link is more than just merely a portal from one web document to the next; it has weighty algorithmic value.

Of course not everyone understands elementary SEO. Before I started at the link building agency I work for, I was mistaken about the purpose of the spam I so often saw in the comment threads of blogs. Why is a payday loan site trying to get me to click on a link in the middle of a discussion about the denouement of The Sopranos, and in broken English no less?

Of course, now I get it. It’s black hat link building. It’s black hat because the link has no benefit to the user experience, it’s simply there to manipulate Google’s algorithm.

If a link is indeed a vote--Matt Cutts uses the same metaphor--then this is plainly voter fraud. A spam blog comment link is simply an effort to stuff Google’s ballot box with inauthentic ballots.

Google wised up to the game of spammy blog comments, and they were forced to alter the algorithm in order to wipe it out as best possible. The webspam team, spearheaded by Matt Cutts, fills in the holes when and wherever it can.

Of course, black-hatters have found other ways to spam and circumvent Google’s election laws. 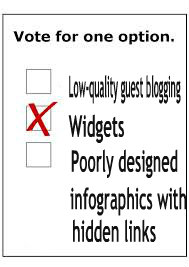 The voter fraud persists, at rates not seen since the days of Tammany Hall. It’s prompted Google to go on a controversial penalty kick.

Even though MyBlogGuest is vulnerable to spammy webmasters and guest bloggers, I believe a lot of good can come from the site. And it’s not like you HAVE to publish your content on the spammy sites; you can choose to avoid them.

Yet because someone had to be the first high-profile victim after Matt Cutts’ famous vent about guest blogging, MyBlogGuest was hit with a manual penalty.

MyBlogGuest is not the only famous victim. Portent blogged about their experiences here.

Who Is Really Being Penalized?

In the wake of this penalty frenzy, webmasters and SEOs are understandably frightened.

People are afraid of linking. It’s true. I’m reading people say they are afraid to even discuss link building that I thought never would be. Econsultancy announced it would nofollow all outbound guest blog links

When Econsultancy says it is afraid of blogging links, I fear it’s not alone.

Actually, I know it’s not. The very blog you’re reading has been hit with a nofollow request. The link was perfectly natural, and although I may be partial, I would say this site is anything but spammy. Indeed, we are extremely editorial in our decisions to link, and we only link to trusted content. We do this so that spam is prevented from seeping and sullying our domain.

Why is Google trying to scare everyone away from linking? Of all websites, they should understand the importance of links. After all, Google was far from being the first search engine. Before them there was Archie, Infoseek, Lycos etc. How was Google able to beat all of them and grow such an overwhelming stranglehold on the market? They produced the best results, and it’s because they were the only search engine to use links in their algorithm.

This Sounds Familiar to Me

I understand that there are bad links out there, but at what lengths is Google willing to go to combat spam? In my opinion, they are extending their regulatory hand too far and are deterring users they should be protecting.

This brings me back to my introduction on American voting rights.

As I said earlier, 41 states have taken action to lessen the incidence of voter fraud. In 2013, nine of those states passed initiatives that would make voters present photo identification in order to vote. The photo identification cited in most of the legislation would be a driver’s license.

Most people have a driver’s license. Most. According to a 2013 study, the percentage of people under the age of 40 that have a license is steadily decreasing. As anyone with a degree in Political Science will tell you, it is the under-40 crowd that is least likely to vote. In a democracy, shouldn’t we be obviating any and all obstacles that would make eligible voters less likely to cast a ballot? I don’t want driver’s licenses to drive away voters.

Oh, and there’s not a single state in the union that doesn’t require a citizen to pay in order to obtain a driver’s license. Hmm. Forcing someone to fork over an expense in order to be able to vote. That sounds dangerously close to being a poll tax if you ask me.

Scaring already apathetic voters away from the polls hinders the democracy of our nation.

Scaring honest and thoughtful content providers from linking hinders the democracy of the web.

As I said earlier, to link is to vote. Linking is a democratic action that brings the ever-expanding internet closer together and exposes users to new concepts and ideas.

For better or worse, Google is slowly becoming synonymous with the internet, thanks in no small part to aggressive lobbying efforts. Their online dominance has given them great power, and it’s only growing with the rest of the web. With great power comes great responsibility. That was said in a movie about a man who controls webs. Google should be held accountable and responsible for the vast power they wield over the web.

If they want to fight for the end goal of a better user experience, they have to keep producing results that users like. The only way they’ve been able to do that is by keeping links as a primary ranking signal.

Matt Cutts even admitted that an algorithm sans backlinks has been tested. Guess what? It was worse.

Google, enough with the fear, uncertainty and doubt; go back to fighting the real voter fraud. Please stop scaring away the white hat SEOs from pursuing white hat tactics. Preserve our right to link/vote so that we may maintain and foster a positive and engaging internet. I understand that there is no perfect way to eliminate spam, but to disseminate your electorate with fear is no way to run a democracy: it’s a way to run a totalitarian state.