The world of link building is fluid and dynamic. Those who build links must always be evolving to keep up with changes and updates to Google’s search algorithm to ensure they are following link building best practices.

This is why savvy link builders pay attention whenever Google makes a move or discusses search publicly. The desire to stay ahead of the curve leads many to speculate over what Google will do next in terms of their algorithm. Although this conjecture can often become sensationalized and exaggerated, one speculation that is particularly interesting is the idea of Author Rank.

The issue of Author Rank has become a hot topic within the SEO industry as many predict it will become a major factor within Google’s algorithm moving forward. Others believe it may already have an effect on current search results. The idea is that Google will aim to rank different content written by various authors based upon the authority or rank of those authors.

The idea of ranking different entities (authors) based on an algorithmically calculated “authority” is a multifarious concept with a number of complexities to overcome, but with the emergence of Google Authorship, it appears this may be something Google is pursuing.

While it still remains a topic of discussion today, the notion of Author Rank has been around for quite some time. Theories that Google might be looking for a way to rank individual authors began to surface in 2007 when the USPTO published that Google had filed for an Agent Rank patent back in August of 2005.

This patent application aimed to give Google the ability to link content and information to the “agents” (or authors) that created it through a digital signature, as well as assign a score to that particular “agent”. Below is the abstract from the patent: 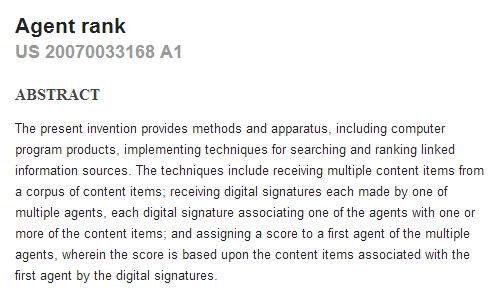 The patent was granted by the USPTO in 2009 and since then Google has filed two continuation versions of the patent. One of these continuations mentions “determining whether the digital signature is portable”. In this article on SEO by the Sea, Bill Slawski discusses how this update to the patent could indicate that a system like Google+ could be used to attribute these digital signatures. In the reference to the update Slawski states,

The development of Google+ has led to a resurgence of interest in Author Rank. This is because Google+ presents a viable platform for Google to identify the digital signatures necessary to implement the policies outlined within their Agent Rank patent. It has become possible for Google to identify and track these digital signatures with a bit more ease (although it is far from perfect) with the creation of Google Authorship.

This resurgence of interest and speculation over Author Rank stems from the implementation of Google Authorship. Although it appears Google has been pursuing the idea of Author Rank since 2005 (the Agent Rank patent), it has not been entirely feasible until fairly recently with the creation of Authorship.

As the Agent Rank patent indicates, Google has been searching for a way to associate “agents” with the content they produce through portable signatures. When the patent was filed in 2005, a simple and viable system for this did not exist. While the W3C’s XML Signature Syntax and Processing system did exist, describing it as simple would be a stretch. Also, it was not an ideal system for authors to claim their online identity with.

However, with the emergence of Google+ and Google Authorship, Google may now hold the key to implementing a system like Author Rank.

This is because Authorship provides a way for authors to link their content to their Google+ profile through a rel=author tag.

This connection provides Google with a portable digital signature (rel=author tag) to attribute a given piece of content to a verified online identity (Google+ profile).

Google has even encouraged authors to enable authorship for their content by rewarding them with an “Authorship markup”. 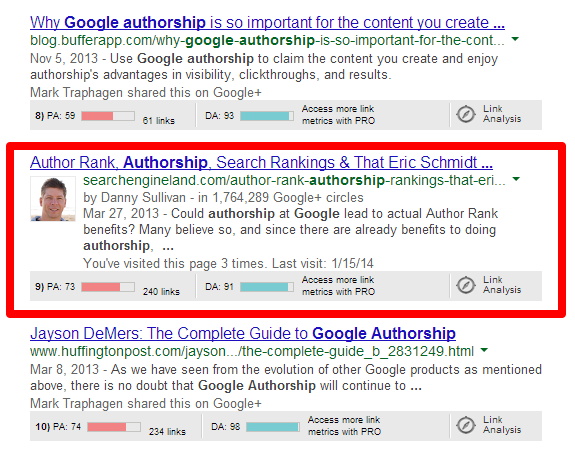 For more information on how to setup Authorship, read this article from KISSmetrics.

Not only does this give Google the ability to connect authors to content, but it connects that content to a Google+ profile specifically, which can provide information and indicators that could help Google determine the authority (or Author Rank) of that profile.

However, recently there was a reduction in the number of results showing this Authorship markup.

Google Authorship guru Mark Traphagen took an in-depth look into this Authorship reduction and discussed his findings here. In his article, Mr. Traphagen discusses an idea which he calls “Author Reputation” that seems to utilize some of the factors that Author Rank could potentially use.

There are a number of potential factors that Google could use to determine authority although it is currently impossible to know which they would use or may even already be using now. However, by looking at the way Google ranks content now, we can surmise which factors will likely be important in establishing a person’s Author Rank.

Google will certainly want to rank quality content, so quality will be a key factor in determining author authority. Google currently uses these signals:

For a more complete list of potential factors that Google currently uses, check out Brian Dean’s post on Backlinko.

It is also possible that Author Rank could take into account all of the content an author has published and claimed Authorship for. The average authority (Domain Authority, PageRank, Alexa Rank) of the sites an author gets published on, along with the number of those sites could certainly be factors for determining the authority of an author.

Author Rank could also possibly begin to take into account factors related to the author’s online presence. The number of Google+ Circles an author is in and the specific people who Circle that author could certainly be factors.

Additionally, authority metrics from Google+ (+1s or Re-shares) or even outside social networks like Twitter (Favorites, Retweets) could be used to help determine Author Rank. Although it would be much more difficult to gather social signals from external networks as Google would not have the same level of access to this data.

Even the author’s overall level of engagement on Google+ with other users could play a part in Author Rank.

These are some of the indicators that Google could likely use for determining authority and Author Rank. As Google continues to look for ways to implement Author Rank, it may be a good idea to get a head start on building your authority in these areas. Here is a quick recap of the possible factors Google could use:

The most prominent effects that Author Rank will have in terms of link building will most likely be related to guest posting as these are written by authors.

One effect that may already be influencing guest posting is that Authorship makes it easy for Google to track spun articles and low-quality guest posts. If recent comments from Matt Cutts are any indication, it seems likely that Authorship could be used in this way.

By displaying results from verified authors higher in the SERPs, Google can begin to weed out low –quality guest posters as they will be forced to link their spammy content to a G+ profile (making it easy to track and penalize) or they will slowly disappear from the SERPs by remaining anonymous.

This point is reinforced by an excerpt from former Google CEO Eric Schmidt’s upcoming book The New Digital Age: 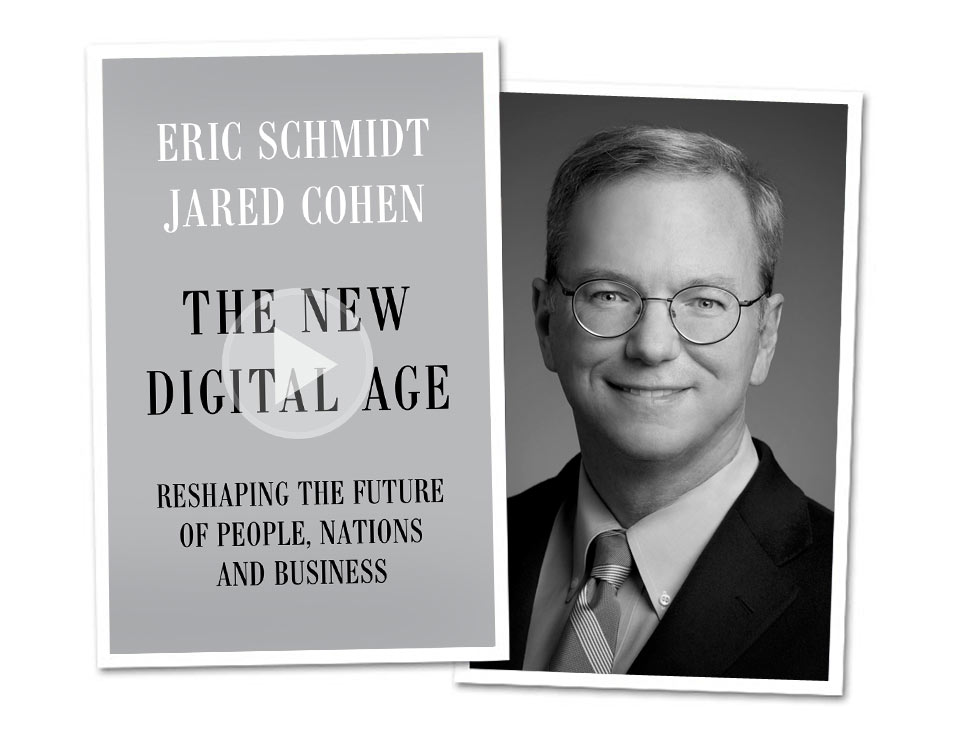 “Within search results, information tied to verified online profiles will be ranked higher than content without such verification, which will result in most users naturally clicking on the top (verified) results. The true cost of remaining anonymous, then, might be irrelevance.”

This quote from Mr. Schmidt is a pretty strong indication that Google wants to be able to identify authors and it appears they want to identify them through Google+ profiles.

This could potentially mean that those without Authorship and Google+ verification could start falling out of the SERPs. This would have a big impact on guest posting as guest authors would need to have fleshed out G+ profiles and ensure they are claiming Authorship on their guest posts.

Finally, the arrival of Author Rank would further reinforce the importance of relevancy in link building. Again, relevancy should already be an integral part of your link building strategy, but when Author Rank comes it will be even more important to specialize and establish yourself as an authority within your niche. 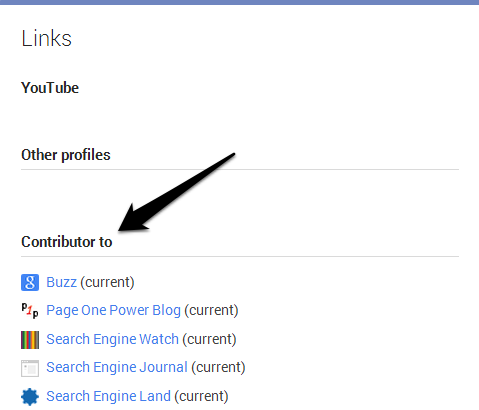 In terms of guest posting, this means claiming Authorship on guest posts about topics related to a certain niche that are published on sites within that niche. In other words, the “Contributor To” section of the author’s G+ profile will contain only sites within the same niche. However, this does not address people who are authoritative on a variety of topics and this could be one of the potential issues with Author Rank.

While the idea of algorithmically judging an author’s authority and ranking them appropriately sounds reasonable, there are some potential pitfalls that could restrict Author Rank from ever coming to fruition.

The main issue is that in order to effectively and accurately implement Author Rank, Google must be able to recognize and track individual people across the internet.

There are also issues with using social signals as part of Author Rank’s ranking system. Social signals like +1s and Re-shares are given so freely they are hard to track and it can be difficult to discern any valuable information from them. In another article by Mark Traphagen, he discusses how difficult it is for Google to track these signals and explains why Google does not currently use social signals for search ranking.

Also, in order to compile an accurate picture of a person’s social engagement/authority, Google would have to access social signals from social networks outside of Google+. In his article, Traphagen also addresses the issues associated with this:

If the introduction of Google Authorship and recent comments by Eric Schmidt are any indication, it looks as though Google aims to implement some sort of system that can rank entities/individuals based on authority.

Mark Traphagen’s findings suggest that Google may already be using a system similar to this (Author Reputation) to determine who receives Authorship markup. However, with the challenges listed here, it remains to be seen if Author Rank will ever fully be realized.

Since it first filed the Agent Rank patent in 2005, it seems Google has been searching for the means to rank authors based on authority indicators. With the development of Google+ and Authorship, it appears that Google finally has a viable system to implement those ideas.

Whether it comes in the next few months, next few years, or is already being implemented in some fashion, it would be wise to start claiming Authorship and adjusting your link building strategies to be prepared for when Author Rank fully arrives.

Andrew Dennis is a Content Marketing Specialist at Page One Power. Andrew is an alumnus of the University of Idaho and consequently a lifelong Vandals fan. You can connect with Andrew on Twitter or LinkedIn.