Back in October, Google updated their Penguin algorithm for the first time in more than a year, an event many webmasters and SEOs had been anxiously awaiting.

Any website affected by the Penguin algorithm couldn't recover until either a refresh or update happened. That meant that for more than a year, websites impacted by Penguin had zero opportunity for recovery.

Despite the exciting news that an update had finally occurred, Google's lack of communication quickly led to frustration for many. It became unclear whether they'd updated or simply refreshed the algorithm, or worse when the update/refresh would be finished, since it was being slowly rolled out. Not even Google employees could get their story straight:

I wrote that article after widely-reported movements in the SERPs were confirmed by John Mueller as a completed Penguin update, only to quickly be corrected as an on-going refresh by another Google employee. This caused confusion and questions as to what that meant for future updates, or indeed even if the update/refresh were still in progress, and if so when it would end.

Despite all of the initial confusion--some of which still remains--SEOs began to refer to what happened in October as Penguin 3.0, which implies a standalone, large update to the Penguin algorithm.

If only it were so simple.

Roughly one month later, on November 27th, publishers and webmasters were continuing to notice movement and impact in the SERPs. Questions began to float around and the changes were soon being dubbed Penguin 3.1. A month is not a large time between updates, or even refreshes.

Then again changes were seen on December 2nd, December 5th, and December 6th. Suddenly we were up to Penguin 3.4 in less than two full months. What was happening? Especially considering Google's unofficial pledge not to release updates around the holidays. These constant updates were confusing to say the least.

Answers were needed as confusion continued to spread.

Finally, it appears Google is ready to address the confusion.

...and likely has been updating continuously the whole time, which explains Penguin 3.1-3.4.

Months had gone by with limited word from Google about the Penguin update in October. Finally, last week on December 10th, Barry Schwartz broke the story that Google would be updating Penguin continuously, optimizing as they went: 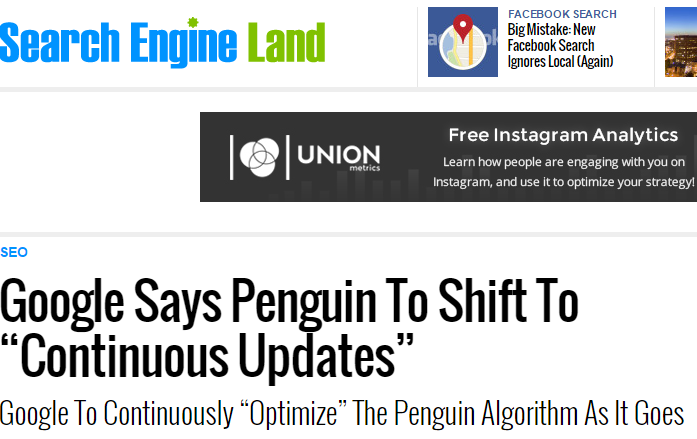 This headline definitely grabbed my attention this last week.

In the above article, a spokesperson from Google sent this following message to Barry Schwartz:

That last big update is still rolling out — though really there won’t be a particularly distinct end-point to the activity, since Penguin is shifting to more continuous updates. The idea is to keep optimizing as we go now.

Google normally isn't quite so forthcoming about their algorithms, so it's great to see them finally respond to questions from the SEO industry. This message was a response to Schwartz’s inquiry regarding holiday updates, considering Thanksgiving and now moving into December we're seeing quite a bit of volatility in the SERPs.

Many of these same SEOs were upset, since Google has stated in the past that they don’t like to mess with their algorithms during the holiday season.

@Bessian Actually, we try to minimize major updates right before the holidays.

As you can see, these tweets are from only a year ago.

So Google finally bent to pressure to explain why they weren't in fact updating during holidays: Cutts said “major updates.” I think it would be hard to classify the days of December 2, 5, and 6 as “major updates.” 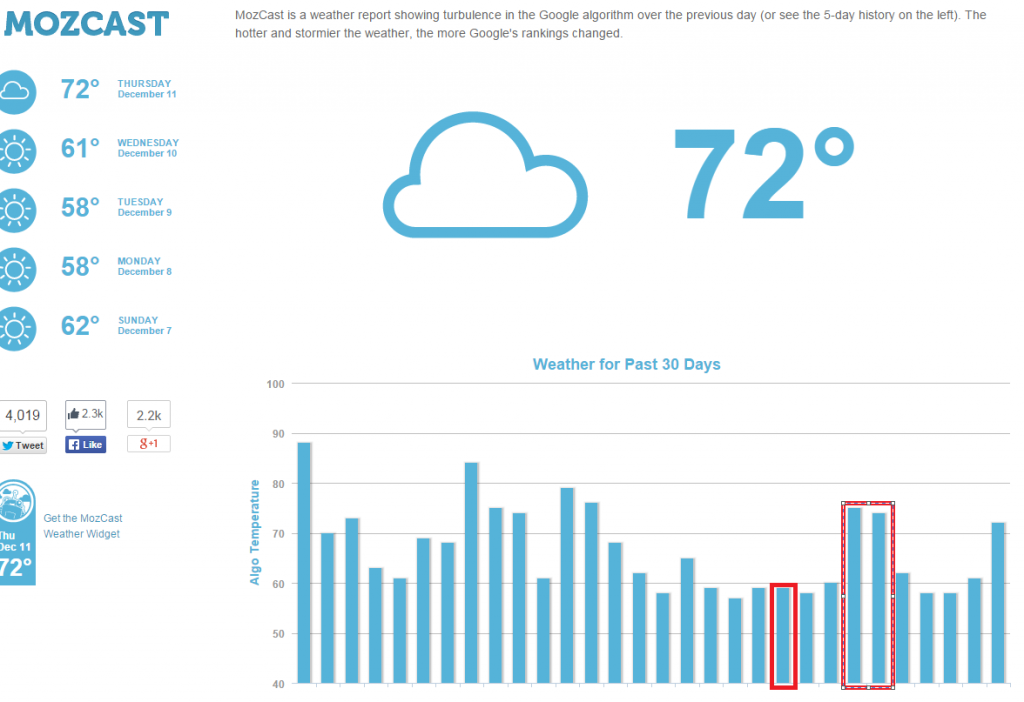 I’ll give you that the 5th and 6th had higher activity than usual, but those aren't “major update” temperatures. They barely register in the top five of daily shakeups over the past month - further supporting the fact that Google has been continuously updating the Penguin algorithm.

With Google moving to a neverending flurry of updates and fixes going forward, SEOs and webmasters will no longer have a year of hyperbolic hypothesizing about what wrath Penguin will bring.

What I find particularly amusing about this is that Schwartz published this article about continuous updates just a day after I heard someone theorize something like this might happen soon (at 11:56).

In our webinar from December 9, Nicholas Chimonas talked about how Google may start to move away from doing big, highly publicized refreshes/updates of Penguin, in favor of the letting the algorithm take care of itself. The algorithm would act on its own and always update when needed. Human employees at Google will have to do little to push it.

This was his answer to my question of how link building will evolve in 2015. It turns out Google was ahead of him, but only by a month.

So the question becomes: why?

For a little shy of three years, Google has been rewriting/refreshing Penguin only sporadically. Now all of the sudden Penguin is going to be continuous, according to Google at least. Why the change of heart?

Well, they likely were unable to continuously refresh the algorithm in the past, especially considering the history of Panda. No doubt it was always an end goal for them - it would appear they're now reaching that goal.

Penguin has also been the source of heavy criticism for Google. In my opinion, much of that criticism was unfair. If you’re really outraged because Google punished you for spamming, don’t forget your own role in the process.

But I’ll concede that some of the ire directed toward Google isn't unmerited. My biggest issue with Penguin was never the concept of Google punishing those who inundate the web with linkspam- that was just Google looking out for themselves and their core product. One could argue by fighting spam they're looking out for the entire web. My biggest beef was Penguin was always the indefinite detention.

When a webmaster was adversely impacted by Penguin in the past, he/she couldn’t just call up Google customer service and say, “Hey, my bad. Everything in our link profile should look squeaky clean now. So if you wouldn’t mind giving us back our original rankings, that would be pretty swell.”

This, or something akin to this, can be done in response to a manual penalty; no dice when the loss of visibility comes from an algorithm. If your site experienced a rankings drop as a result of Penguin, sorry. You’re just going to have to wait until Google decides that today is the day to refresh the algorithm.

Meanwhile, you’re compelled to spend money you don’t have--thanks to lost revenue from loss of rankings--into a link cleanup that isn’t guaranteed to put you back where you once were. Even if you were a knowing purveyor of webspam--and not everyone is so knowing--this is a particularly pernicious punishment.

I’m not the only person with this sentiment, and many have levied similar criticism at the search giant. Many of these people had louder bullhorns and taller soapboxes than I.

I don’t think Google necessarily always cares what people think of them. I doubt Eric Schmidt loses sleep over whether or not the lengthy gap between Penguin refreshes has been fair. I DO think that Google is interested in reflecting as accurate and relevant results possible, and if a webmaster has cleaned up their act in a relatively short timeframe, ongoing punishment doesn't always make sense. Google is far more interested in delivering users what they’re searching for than punishing spammers.

So perhaps Google finally has cultivated technology they didn’t have before, and are now able to let Penguin maintain itself with little to no human interjection. I don’t know, I’m not the person you want answering questions regarding technology. I barely know how to connect my computer to the network printer.

I do know SEO though, and this is a good move for the future. Google's decision to finally reveal Penguin will be updating on a continuous basis was much needed - too much misinformation and confusion existed before. No doubt this new, unending refresh will cause it's own misery, but more communication from Google is always for the better.

If Google is intent on committing to their word--and I have no reason to believe they’re not--the new long, continuous march of the penguin is good for webmasters who wish for faster recovery, as well as for Google's users searching for relevant results. More accurate, more often refreshed data serves everyone well, in this case.

Let's hope for a brighter future.