Google is still a relatively young company in the typical timeline of corporate enterprise.

The search giant hasn't even celebrated its 20th birthday yet—currently just over 16 years old, Google is still a fledgling by most standards.

Yet for a 16 year old company, Google has amassed a tremendous amount of power and influence. Google is synonymous with the act of looking up information, quickly and efficiently. What corporation better embodies the change the internet has unleashed upon the world?

Google gained its tremendous power by simply being the best. Or at least, the best search engine. These days Google has their hands in many different pies, yet the staggering majority of their revenue continues to come directly from search.

With that amount of revenue on the line, you can believe many tech giants have attempted to topple Google. Thus far, they've all failed. The amount of technology, infrastructure, and resources necessary to make an even semi-functional search is staggering.

Personally, I’m a fan of Google. I try to imagine an Internet without search engines and I can’t even fathom it. Imagine looking for a specific book at the Library of Congress, but the organization was haphazard: Cormac McCarthy’s The Road next to The Berenstein Bears.

On a professional level, I can’t deny that Google does things that irk me. I’m not talking about stuff like the knowledge graph, although I understand why it upsets people. Their continual infringements on privacy are upsetting to me as well, but that’s more personal as opposed to professional.

What I’m talking about is Google’s addiction to spreading FUD: fear, uncertainty, and doubt.

Google hardly invented the practice of FUDmongering: it’s an age-old manipulation tactic intended to create knee-jerk reactions instead of intellectual reasoning. Used by politicians, advertisers, and sales people since nearly the dawn of time, it's more successful than it should be. Instill fear in the audience, and they will need, not want, to do as you instruct.

Google may not have invented it, but they have perfected the art to suit their own needs. They don’t really use FUD as a way to gain customers: they use it more for scaring marketers and website owners, to maintain the integrity of search.

It’s no secret that Google holds captive one of the biggest audiences in the world: nearly everyone who uses the internet.

Google's built a literal empire upon this. Ads within search have historically contributed to over 90% of Google's overall revenue.

Tapping into a small, tiny portion of this audience - people searching for information, products, or terms relevant to your product or service - is enough to make or break businesses. Search traffic is a huge portion of many online marketing campaigns.

Because of this, marketers will go to great lengths to earn positions at or near the top of organic search. Those great lengths sometimes come at a great cost to the user experience. This was particularly true in the past, when Google's search algorithm was easier to manipulate with spam tactics.

Because Google was unable to internally control spam, they were forced to convince marketers not to spam in order to manipulate the algorithm. And while I'm all for Google preventing spam, manipulation, and preserving the quality of search, Google eventually began disseminating FUD as part of their spam fighting tactics.

Now, I’m of the mindset that Google of course has the right to do what it can to protect the quality of its cash cow. We wouldn't have been mad if GM had recalled all of their vehicles to fix the brakes before drivers started dying.

It’s the way Google goes about their business that I find troubling. I fear that too often Google protects their shield by spreading, well, fear. Which I find odd for a company who's mission statement is "to organize the world's information and make it universally accessible and useful."

Spreading fear, uncertainty, and doubt is the exact opposite of their mission statement - even if it is for a good reason, to fight spam.

Here are a few examples of Google and their employees spreading FUD, from this year alone.

The Decay and Fall of Guest Blogging

Google rang in the new year with a bang. 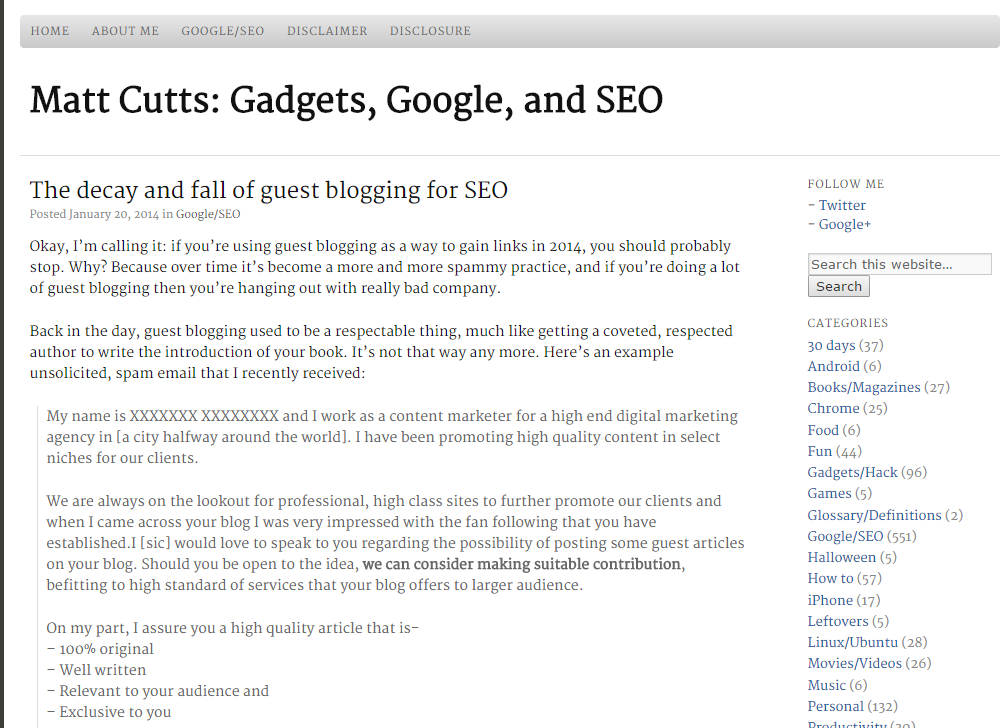 Guest blogging has been a widely used SEO tactic for quite a few years. The concept is simple enough: you write an article that contains a link back to your site, and you get that article published on a different site.

Admittedly, it’s not always done right. Some SEOs chose to write uninteresting, vague, generic guest posts with keyword rich anchors shoehorned in. Matt Cutts got fed up as he saw another request pop into his inbox, so he composed this diatribe.

To say this struck fear around the industry is an understatement. In less than an hour, guest blogging transformed from being a viable SEO tactic to a third rail.

Furthermore, guest blogging is a legitimate online practice done outside the realm of SEO as well.

It wasn’t just the “f” in FUD: doubt crept in. You’ll see in the image that the title of the blog is “The decay and fall of guest blogging for SEO.” This was NOT the original title. When this article was originally uploaded, the words “for SEO,” weren’t there.

To many, it seemed Cutts was calling for the end of all guest blogging. Not just abusive, spammy practices.

The nofollow link attribute was originally introduced in 2005. Google invented it as a way to combat link spam, and it was much needed at the time. Fast forward nine years later, and it’s being misused, in no small part due to Google’s FUD campaign. 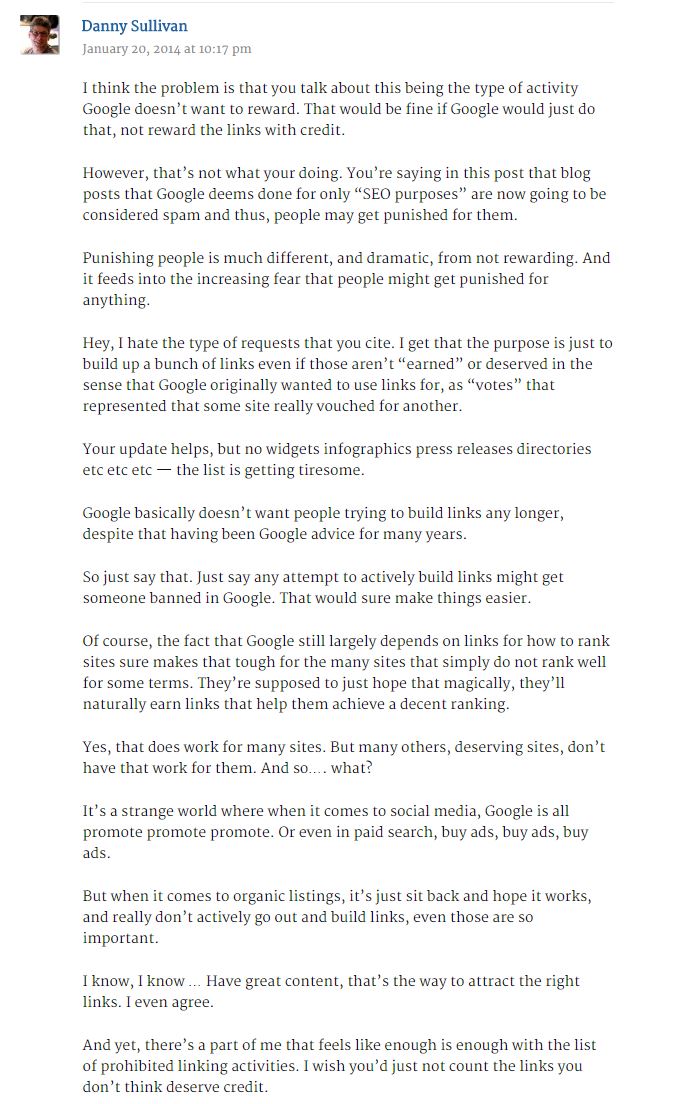 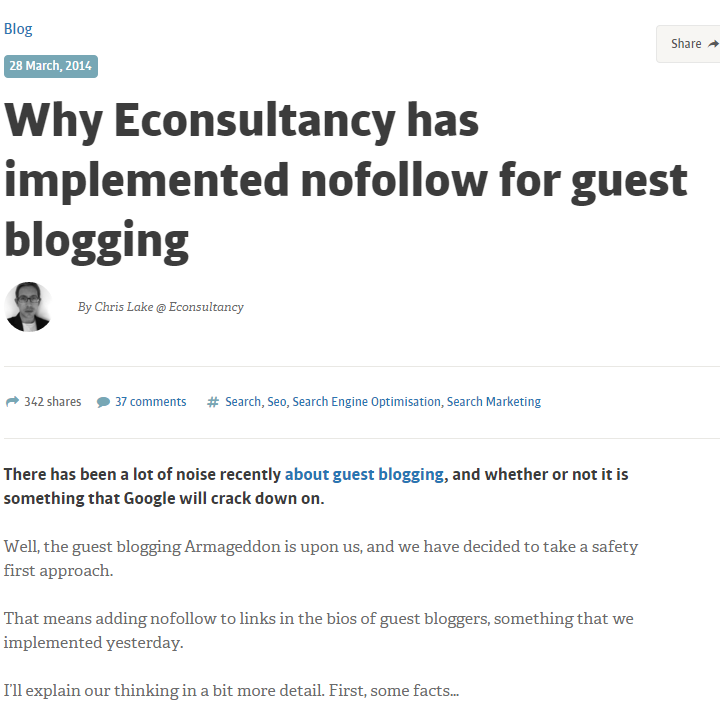 Econsultancy isn’t just a mom-and-pop SEO shop: they’re widely considered a thought leader within the industry. They actually count Google as a client. 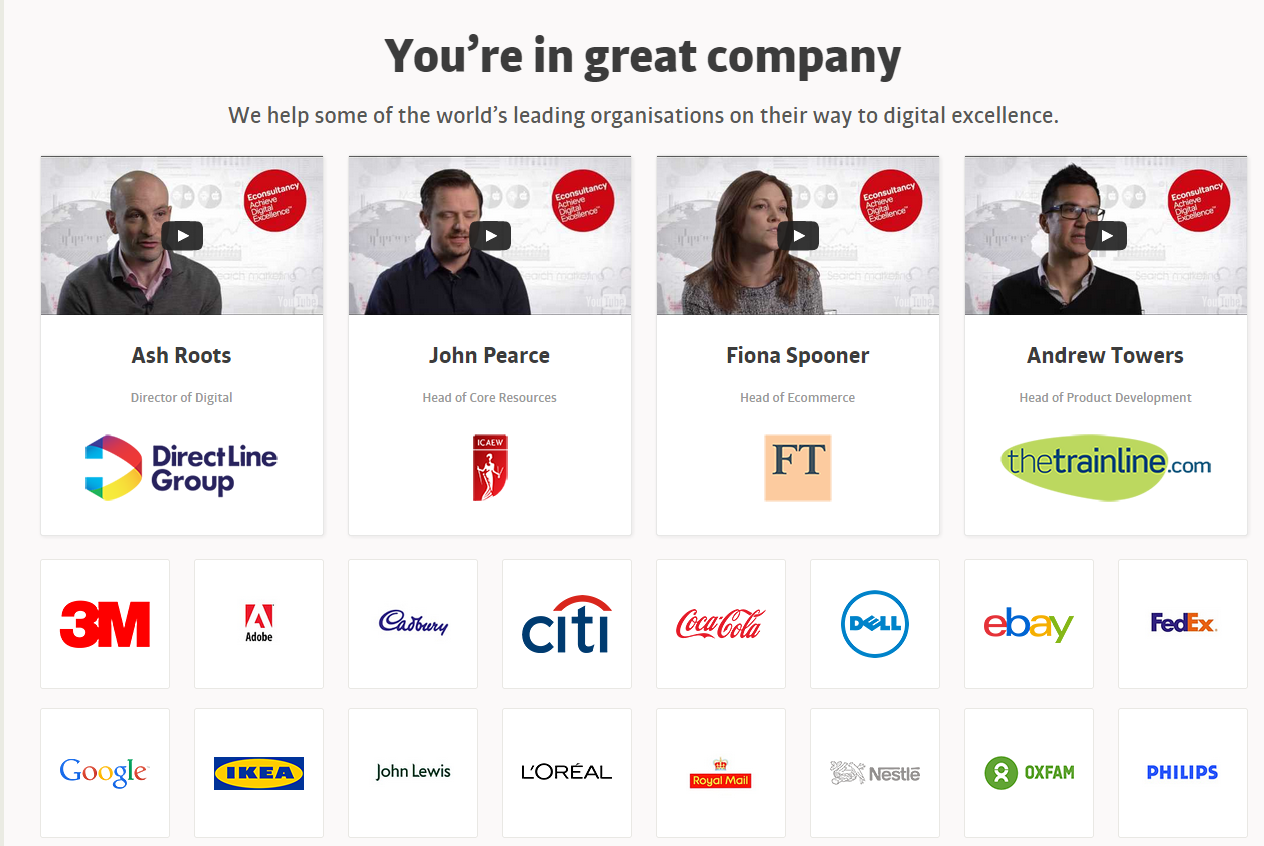 So it was a shocker when they announced they would be nofollowing all of their guest blogging links. They noted another thought leader who was fearful of the almighty Google: 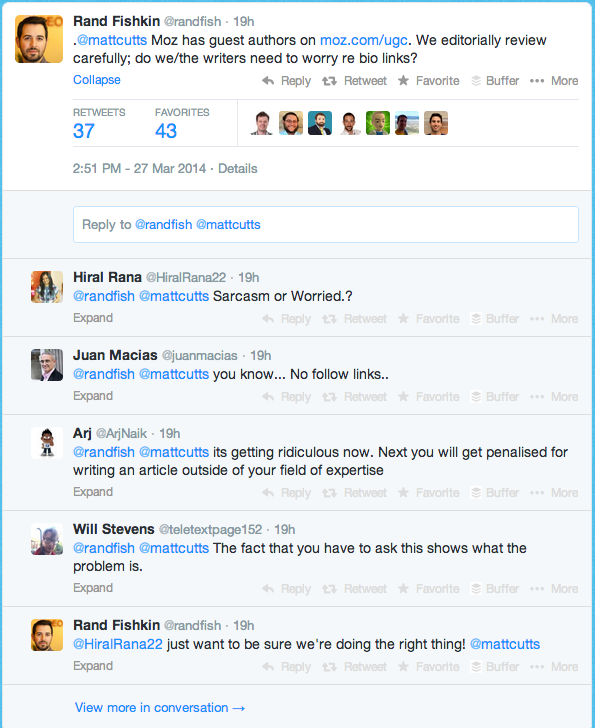 What’s astonishing about scaring SEOs and webmasters into nofollowing links is that it’s actually a form of Google shooting itself in the foot. It’s no secret that links are a primary ranking signal in Google’s algorithm: if the web starts summarily nofollowing links, Google loses its most important authority signal.

Ultimately, Cutts’ proclamation in January came with no immediate force and effect. Even though he is the voice of Google, it was unclear if he was speaking on behalf of Google or if he was just venting personal frustration.

For weeks, it seemed like an empty threat. That changed on March 19th, when Matt Cutts tweeted out the following:

Cutts never named the “large guest blog network,” but it was quickly clear through a series of tweets that the victim was My Blog Guest, a guest blogging community.

I use the word community, not network, purposefully. That’s because My Blog Guest was not a network.

A guest blog network is a series of resurrected domains with robust link profiles that link to each other. Note: that’s a brief definition, you can learn more here. My Blog Guest is not that, not at all. It is a forum through which bloggers and blog owners can conveniently connect.

I’ve used My Blog Guest. I’ll be perfectly honest: not every site you find in the forums is top-notch. There are also some spam bloggers who are looking to post on just about any site for a link. However, it’s my right to not interact with those people.

But in the wake of Cutts’ blog, someone had to be punished: someone that acts as a flagship for the practice of guest blogging. Perhaps a site that actually had the words “guest” and “blog” in the URL.

It is in my opinion that My Blog Guest was unfairly maligned in Google’s effort to make an example.

Google likes to introduce new features, and it’s been doing so frequently over the course of the past few years. There was no such thing as a carousel back in 2010, for example. The knowledge graph only came to existence in 2012.

The search engine has made a series of smaller adjustments throughout the year, several of which were noted around late July. Seven-packs, the local listings on the SERPs, started disappearing at an unusual rate. So did carousel results. What’s more is that these changes happened out of nowhere. Four months later, and there has been no formal announcement from Google regarding what happened. SEOs just decided to call it Pigeon.

Google obviously has a right to do what it wants with search: it’s their product. But some local businesses spend thousands and thousands of dollars on ranking in organic search. Search visibility can make or break a small business.

This lack of communication, of transparency, furthers the doubt emanating from Google.

Back in August, Google posted this on their webmaster central blog. 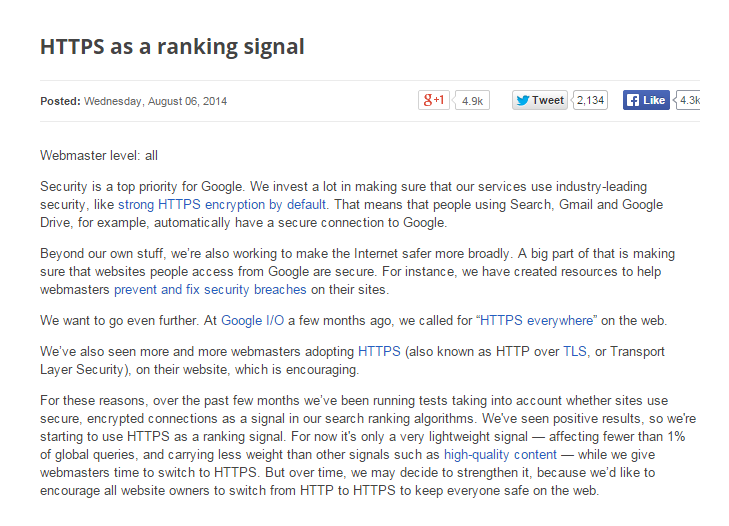 Before long, even people that didn’t know the difference between HTTPS and HTTP were proclaiming encryption as the most important ranking signal ever!

Okay, that’s hyperbole, but the industry got carried away. Erin Everhart of Home Depot was prompted to write this article, begging the SEO community to take a chill pill. 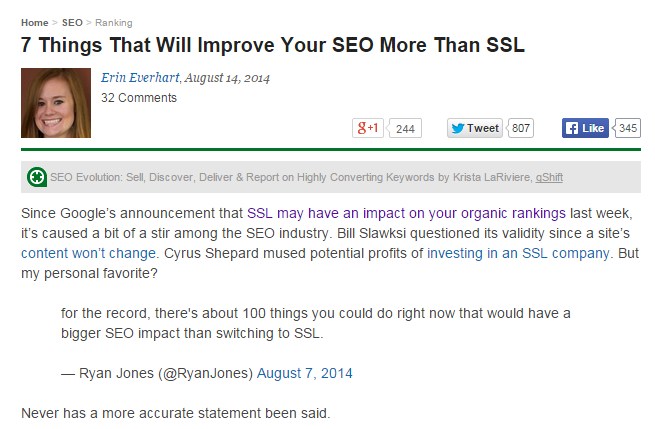 Now to be fair, Google isn’t always responsible when someone misinterprets what they say. If they clearly state their intentions and the SEO community goes into a tizzy anyway, I feel that says more about SEOs than Google. Or, as this tweet by Dan Shure brilliantly puts it:

I would say in this instance that Google is not at fault here for the fear. They announced a new signal--which they are under no legal obligation to do--and SEOs went into panic room mode. That’s what happens when you are the most powerful marketing platform on the planet.

The Solution: More Transparency and Communication from Google

The best way to change Google's previous course of FUD is simple: more communication and information from Google. More transparency. To have not just their product live their mission statement, but to have the company culture follow it as well.

Unfortunately, Matt Cutts, Google's unnofficial representative to SEOs, has been on leave lately and plans to stay away until at least 2015. Many question whether he'll ever return.

Sure, I've used Cutts in this piece as an example of Google's dissemination of FUD. But some communication is better than none. And Cutts got it right more often than he got it wrong.

As Google continues to improve their algorithmic detection and prevention of spam tactics, hopefully they will leave the FUD behind them.

As SEOs we should hold Google accountable, and call for more communication. FUD shouldn't be the way any company operates - particularly Google.