How NeoMam Uses Yesware To Win At Digital PR

‘Which tools do you guys use?’ is without a doubt the number one question I get every single time I attend a conference, host a webinar, or walk into a networking event. The conversation normally ends quickly, as soon as I start talking about how we virtually use zero tools outside of Google for prospecting, Yesware for email tracking, and CoverageBook for reporting.

In this post, I'll explain the reasons why our Media Relations team has selected a tool that was mainly developed with Sales teams in mind and, in principle, has nothing to do with digital PR.

Today I’d like to share with you how we use Yesware for digital PR during our promotion campaigns. At NeoMam Studios we produce and promote visual content to support our clients’ digital marketing and SEO campaigns. From infographics to video, we work with different types of content and brands across sectors and countries.

‘Which tools do you guys use?’ is without a doubt the number one question I get every single time I attend a conference, host a webinar or walk into a networking event. The conversation normally ends quickly, after an awkward silence and disappointed looks as soon as I start talking about how we virtually use zero tools, outside of Google for prospecting, Yesware for email tracking and CoverageBook for reporting.

In this post, we’ll explore the reasons why our Media Relations team has selected a tool that was mainly developed with Sales teams in mind and, in principle, has nothing to do with digital PR. 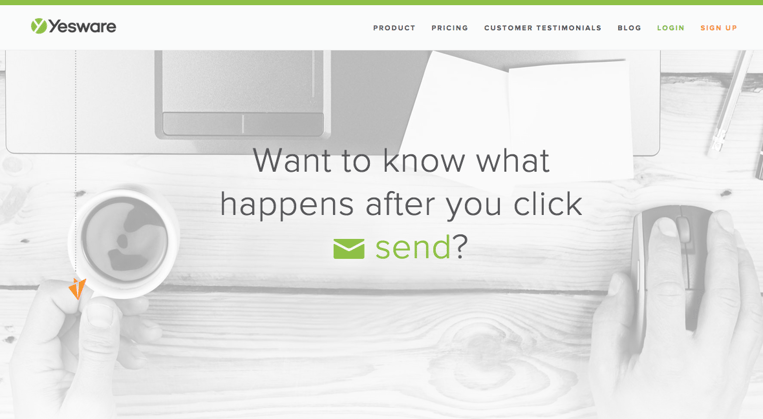 Link building is an important element of digital PR. Learn the secret to doing it right in our free ebook:

Why We Use Yesware

During my time as a gun link builder for hire, I tested many email tracking tools: Bananatag, ToutApp, ContactMonkey (you name it, I tried it). Gladly, my testing days came to an end as soon as I found Yesware.

The main reason why I chose Yesware over other tools/apps was its simplicity. At the beginning, all I wanted to know was whether a prospect has opened my email. Yesware lets you know instantly with a non-intrusive pop-up notification, whereas most tools would either require for you to be on their dashboard at all times or send you an email notification for every open/click. Not ideal for our team, as I don’t want them to be sitting inside of yet another dashboard nor receiving lots of unnecessary emails.

This feature lets us know exactly which prospects are most interested in the content we’re promoting by tracking who opens our emails. In addition to this, we get to see whether they opened it on desktop or mobile, which is key during our follow-up stage when we reach out to unresponsive prospects.

Yesware will let you know immediately after an email got opened by showing a little pop-up notification on screen. Alternative, there’s a collapsible menu sitting on top of your inbox (Event Dashboard), where you will find all the details:

Yesware employs the same technology that email newsletter services use by relying on a tracking pixel embedded at the end of your tracked message. If you want to learn more about how this feature works, I’d recommend that you read this post.

Yes, we use email templates, as there’s a tone and a particular pitch we approach journalists with when sharing visual content, BUT we do a lot of personalisation. 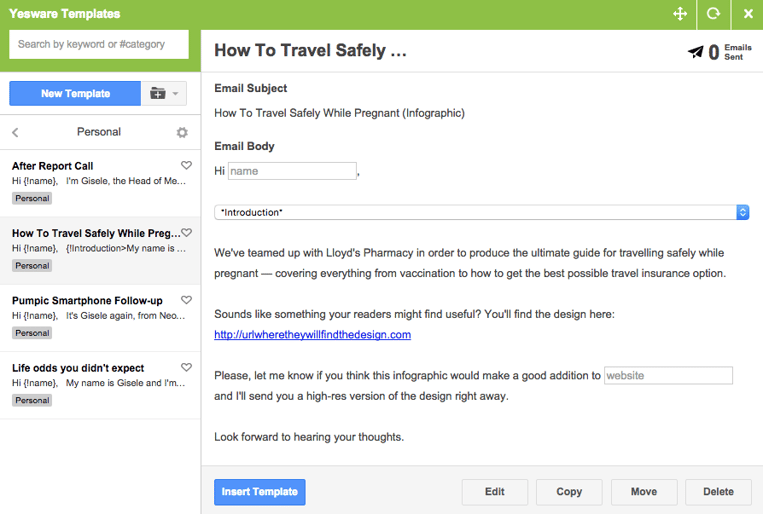 The beauty of this tool is that these templates are highly customisable, including not only text fields but also dropdown fields - for those who want to have different introductions/closings or even pitches within the template, depending on the relationship they have with the journalist/blogger/editor they are reaching out to.

One of the key stages of our promotion campaigns is the Follow Up Stage. This is the moment when we approach unresponsive prospects for a second and last time, making sure they have seen the content we’ve sent their way.

As soon as I found out about Yesware’s reminder feature, I was certain that my team would never miss a follow up again. The reminder alerts you to follow up and prioritise emails that haven’t received a response. The reminder is easily set when viewing the email or through our Event Dashboard. You can set a date and time for the reminder and can set conditions for when you would like to be reminded (i.e. Remind me only if nobody replies.) 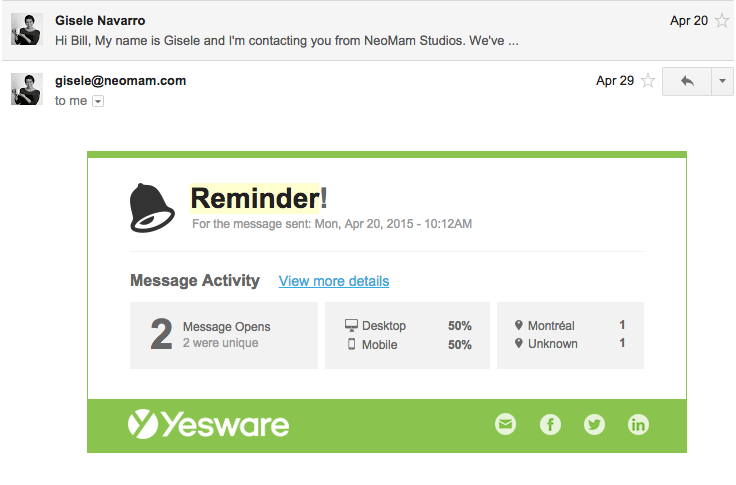 When the reminder is due, you are sent a new email right to the top of your inbox that contains the previous email thread. This little change made a massive difference for my team as they used to spend hours hunting for unopened/unanswered emails before launching their follow up campaigns.

Soon after starting working with Yesware, we moved onto a Team plan so that all in-house and remote multilingual team members could access a shared analytics dashboard where to learn how to better contribute to our campaigns’ success.

In addition to tracking our work as a team, the Team plan also provides the opportunity of sharing email templates with everyone involved - a fantastic way of learning from top performing pitches and contributing for improving those templates that are not achieving good results. 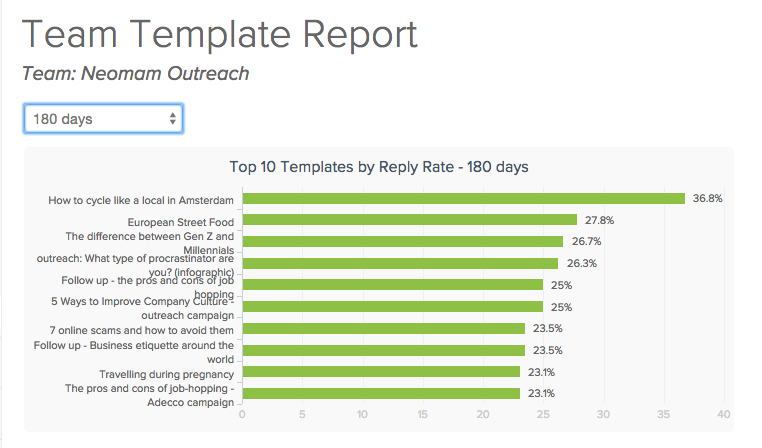 How We Learn From Yesware Reports

Some key elements of reports we pay close attention to are:

Each of these elements we will analyse at different stages of our campaigns and will help us make decisions to optimise on-going campaigns, as well as the overall efficiency and performance of the team. Below I’ll break down the what, the why and the how of each of the different metrics: 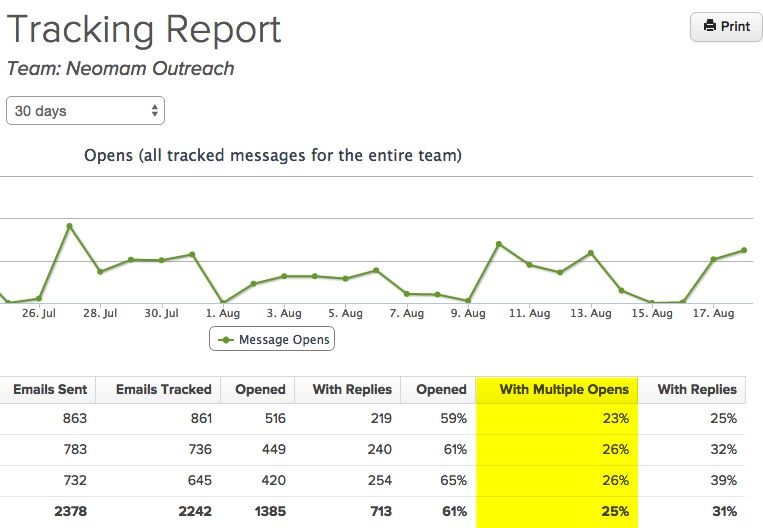 Our campaigns will normally last between 10 and 15 working days, and the different stages of our process will be set according to the level of engagement achieved after our first round of promotion.

When noticing that many prospects are repeatedly opening our pitch but are not replying to our emails, we will make an executive decision to launch our follow-up stage sooner than we normally would. We do this in order to help these editors/journalists/bloggers take the next step: publish our content or let us know they liked it but are not quite sure about it.

Are we noticing a trend where most prospects open the email on their mobile? If so, we’ll make sure our follow up email is shorter, snappier and to the point. Our goal would then be to write a pitch so short and blunt that someone opening it on mobile wouldn’t need to scroll down even once.

If we can deliver our pitch in two sentences, chances are these busy people will be likely to hit “Reply” and get back to us in the same fashion.

This doesn’t work every single time and that’s why having the data to support such a move is crucial. In some countries, short pitches don’t perform so we cannot risk our campaign because we assumed going short was the right choice in this super fast times we’re living in. 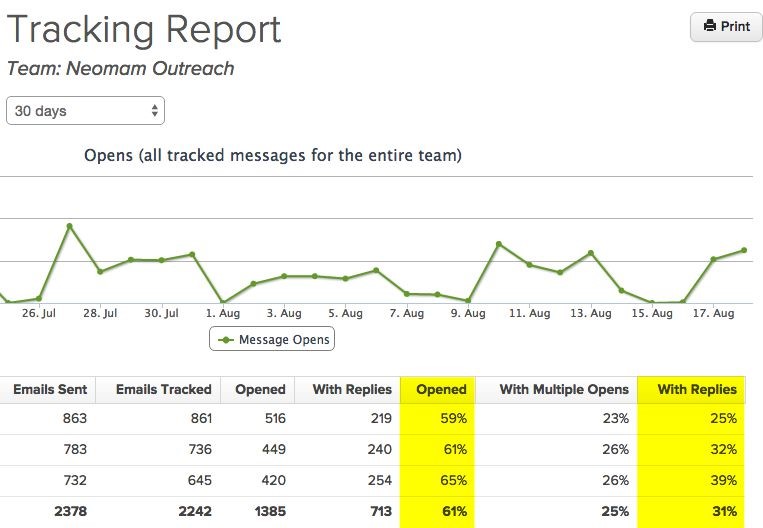 When analysing our metrics for a particular campaign, we pay special attention to the ratio between email opens and actual replies. We do this on a regular basis to catch any potential problems we could be facing with on-going campaigns:

When we sent 50 emails and none of them was opened, we have a Subject line problem — Fix the subject line and try again

When a journalist opens the email but doesn’t reply, we could be facing one of the following scenarios:

It might seem difficult to whether we’re facing scenario 1 or scenario 2, but it’s simply a matter of reading your pitch out-loud to rule out a bad intro and spend some time inside of the publisher’s site to confirm you’ve emailed the most relevant author.

Every week our team will sit down in front of a whiteboard and update our Yesware metrics from the week before. We do this as part of our Weekly Huddle, in which each NeoMam team will update the rest on how their department is doing: every team (from Ideation to Design) has their own metrics of success. When it came to Media Relations, we knew we had to incorporate our Reply Rate as a key performance indicator.

We had a mini-game running till the end of August revolving around our team Reply Rate metrics: the goal was to raise the bar to a consistent 30% Reply Rate across team members, the reward was a ticket for New Media Europe 2015. We started the game in May 2015 with a team reply rate of 24% and we’ve managed to turn that into 34% on week two of August — closing the month with a prize!

Open Rate and Reply Rate have become our name and surname. By paying attention to fluctuations in these metrics, we have learnt how many prospects on average we should be approaching for a particular campaign and which days are performing the best for certain stages of our process.

Achieving consistently good results with content marketing isn’t easy, and there’s no magic tool that will change that anytime soon (if ever). When choosing a tool for your team, weigh up the time they will put in against the learnings they will get out of it.

Swiss Army apps that promise to automate everything might sound like a great investment that will free up people’s time but in my experience, they are prone to become time-wasters from which nobody can truly improve their skills.

Originally from Buenos Aires, Gisele is the Head of Media Relations at NeoMam Studios - a visual content marketing agency based in Manchester, UK. With a background in SEO and link building, she now specialises in digital PR, shaping the content promotion strategies for a range of clients and managing NeoMam's multilingual team of digital PR executives and blogger outreach specialists.