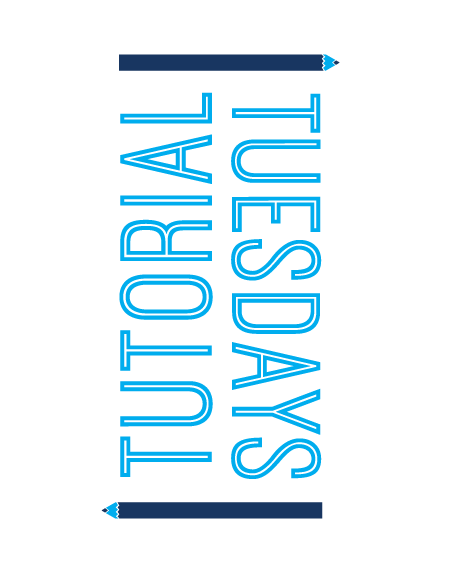 Hey Linkarati readers, we are starting a new series today called Tuesday Tutorial. Every other Tuesday, we will publish an actionable piece of content that will help link builders to better understand a certain process. Sometimes our tips will be targeted to the more inexperienced--such as today's--other times we'll go over some more advanced stuff.

Personally, I’m a big fan of social media. I would relay to you a rough estimate of how much time I spend on Facebook during a given week, but I don’t want to come up with such a number for fear of being overwhelmed by first world guilt.

Suffice to say, it’s a lot of time.

It’s not even just during my recreational time; I’m perusing social media at work. I have to: I’m in content marketing, and I’m paid to keep my ear to the ground about the goings-on in my industry.

I’ve been a link builder for a little over two years now, I can say with assurance that it just keeps getting more difficult actually. There are a multitude of reasons for this. First off, Google has run a rather successful FUD (fear, uncertainty, doubt) campaign for the last few years that is designed to scare away black hatters/spammers. Consequently, Google has managed to scare a lot of white hatters pursuing reasonable and standard tactics. If you didn’t see, Bing is getting in on this action as well.

Another reason it keeps getting increasingly difficult is that there is a bizarre rumor out there that links aren’t an important ranking signal. I can’t say that I fully understand where this myth is born from. There’s no evidence to suggest that this is the case. Indeed, all evidence suggests that links will be a primary ranking signal for a long time to come.

I always ask people what exactly would replace links as a primary signal should Google decide to go in a different direction. Social media is one of the more frequent replies.

I don’t want to get into all of the reasons I think that’s absurd in this space. For arguments similar to mine, check out this article by Jon Ball.

Even though I find it unlikely that social shares will become a primary signal over links--at least not for a long while--that doesn’t mean I believe you should just completely abandon social media. I would never advise that. Social media can have some amazing indirect effects on your link building efforts.

Apart from being a place to share awesome kitty pictures and for the New York Police Department to exhibit a complete lack of self-awareness, social media platforms can prove to be an indispensable link building tool. Social media can help you to:

Here’s something intuitive for you: if you want to rank in Google, you want to get links from sites that rank for your target keywords/search queries. Google is the best link prospecting tool available. But if you’re only using search engines to mine your link prospects, you are narrowing your options, and you will “run out of internet” surprisingly quick.

A lot of bloggers are not only tweeters, they are serial tweeters. You can find a swarm of bloggers on social media that you might not find on Google, especially if you’re targeting highly competitive keywords.

Let’s say you run the site catclothes.com, a site that sells clothing designed for cats. There’s an entire community of people out there who enjoy dressing up their cats: I know and begrudgingly associate with many of these people.

Here’s a picture for a twitter search of #caturday. I did this search on a Tuesday, and it took me a long while to scroll out of the Tuesday results. Caturday is not bound to the standard calendar week it appears.

A # search is not the best way to find influential people in your niche however. A lot of people could be using the a cat related # simply because its trending. The better place to look for influential webmasters on twitter is peeking at bios.

Of course, you don’t want to go through every single tweeter and crawl every bio manually. That would take an exhaustive amount of time. Followerwonk is a tool that does that for you fortunately. A search on Followerwonk will return twitter users that have, say, “submit cat pictures” in the bio.

Not all of these handles will have corresponding websites. But many of them will, and they are certainly relevant to cats. In fact, some of these sites might let you submit cats dressed in your clothing and give you the link. Worse comes to worse, you just found a few cat picture twitter profiles to follow. What a tragedy.

Link building is not mutually exclusive to relationship building: you can “build relationships” online in any capacity, as anyone on Christian Mingle knows. And technically, you can attempt to build links without making any effort to build relationships: just don’t expect to meet any of your end goals.

Let’s use catclothes.com again as an example. There are an innumerable amount of cat enthusiasts on twitter.

Social media is a great place to observe conversations and answer questions about “hot topics” in the cat attire--or “cattire” for those of you into portmanteaus--field. Using Followerwonk again, you can figure out the top kitty bloggers to follow. Anytime they have a question, even if it’s not related to clothing, go ahead and try to answer it. Do this enough and you will have a strong following of people in your niche who will lend you a helping hand when need be.

If anybody should understand the principle of “scratch my back and I’ll scratch yours,” it’s a cat owner.

Social media is one hell-of-a-place for shameless plugs. About half of my facebook posts are simply advertisements for a show I’m performing in the future.

It’s never easy to give away products for free, but sometimes it’s a smart business move. A site like catclothes.com could build some relationships by doing so. What they could do is reach out to a bevy of cat bloggers and offer their cats clothes from a particular line.

Catclothes.com could choose to run a series one day, “Catablanca.” It would be a series of images of cats dressed up in clothes reminiscent of the 1942 classic Casablanca. Catclothes.com would simply ask cat bloggers if they would be interested in participating in the series, using feline fedoras courtesy of their site.

After compiling enough photos of cats dressed like “Clawed” Rains (joke designed for TCM watchers only), catclothes.com would publish them in a series on a special landing page. Each photo would come with a link to the other cat blogs. Even if it’s amazing (which obviously it would be), you can’t just throw it out there and hope people just stumble over to it. “If you build it they will come” is only a true philosophy in Kevin Costner movies. Promoting your awesome content is a must.

Google+ is one of my favorite places to promote content. This is because G+ has an absurd amount of niche specific communities, a lot of which have high engagement. A G+ community is simply a place for similar-minded users to share content and discuss ideas about a particular niche. This very blog moderates its own community for link builders.

Even though G+ tacitly sets itself apart as a social platform for professionals: 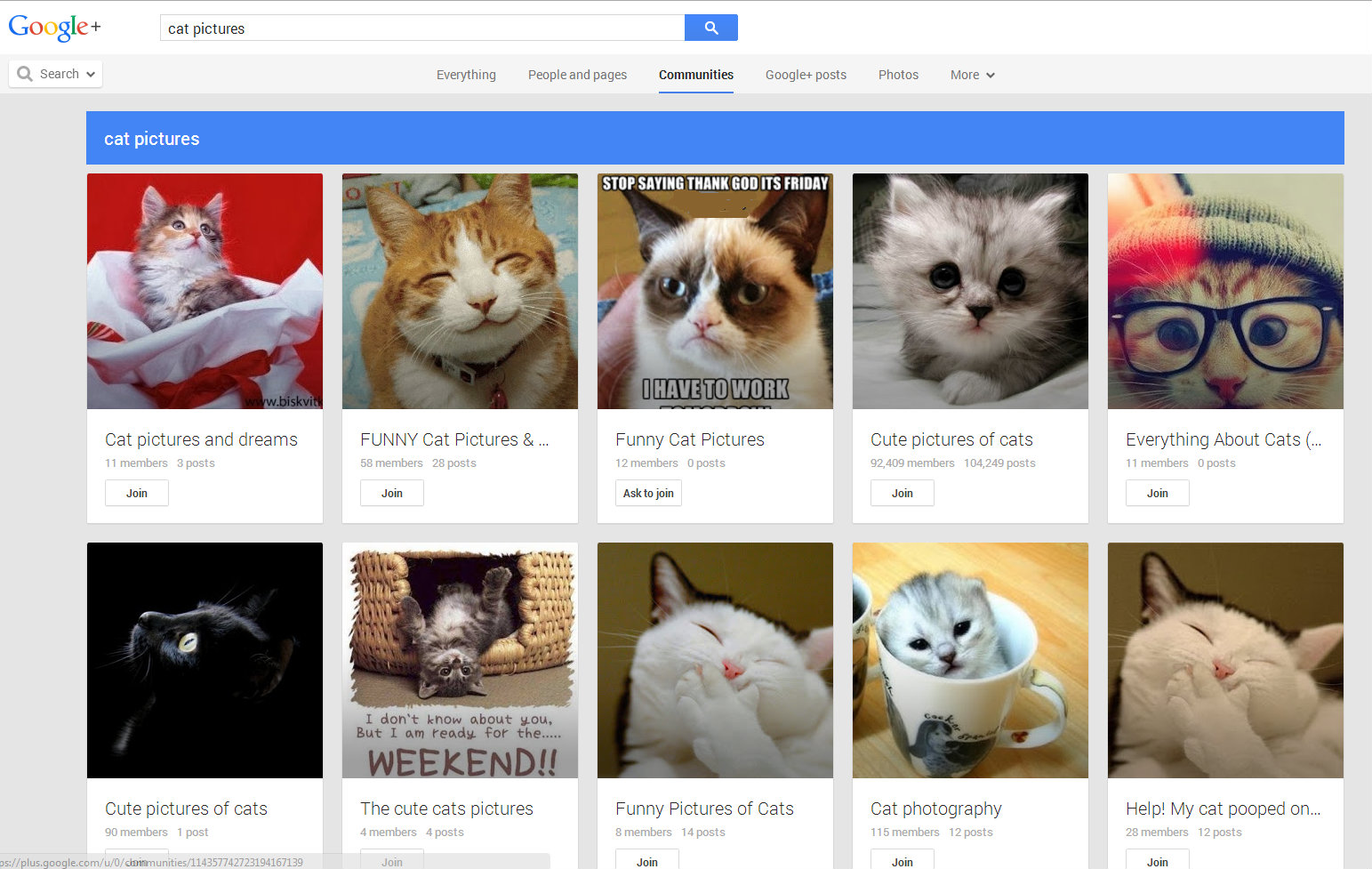 Professionals love cats too. Apparently, there are over 92,000 professionals that enjoy “cute pictures of cats.” This would be a great place for catclothes.com to share their slew of Catablanca pictures. Who knows, a G+ user might even link to it on her/his site.

Twitter is another stellar place to promote content. You just have to learn to play the game of “get to know a #.”

Let’s say that you didn’t post “Catablanca” on your domain, but instead contributed it elsewhere. Hey, you wanted a link right? This is even more incentive to promote the content. Not only do you want people to see it so they can maybe link to both your site and the site you published on, you also want to do this as a measure of good faith to the other webmaster that you’re doing what you can to drive traffic. This goes back to relationship building.

Even if social media isn’t a part of Google’s algorithm, every link builder should leverage it.

Social media is helpful to a link builder in various ways. It can help you to find link prospects, to build relationships and to promote content. And here’s another reason you should use social media for your work: it’s just more fun that way.

Now admit it: you spent far too much time on that BuzzFeed post I linked to in the intro, didn’t you?