Hello, and welcome to another installment of Tutorial Tuesday, Linkarati’s weekly series dedicated to highlighting a particular SEO process and/or tactic. This week, I plan on explaining what is needed in preparation for a Twitter chat.

We’ve been doing Twitter chats for Linkarati since March of this year. Much like any new project, we figured we would give it a try, but if we weren’t happy with the growth after the third chat, we’d let it die. Now it’s the end of June, and we just had our most active chat yet.

It’s hard to pinpoint exactly what the growth is attributable to. We’ve been entirely fortunate to enlist a series of incredibly smart and talented SEOs for our featured guest spot. Michael Stricker, Mike Moran, Paul May, Paul Shapiro, Tadeusz Szewczyk. No burgeoning chat has any business attracting influencers like this, so we’re grateful.

Burgeoning is the key word there, because we’re still growing and learning. But we’ve conducted enough of these chats that we’ve figured out a few best, standard practices.

For the purpose of this article, I’ll pretend that I run a Twitter chat for a news site devoted to the Bonnaroo Music and Arts Festival. Why? Because I just removed the wristband that I used to get into the famed music festival last week. Yes, that means I wore it a whole week after the festival was over. I’ve been accused of being obsessed with Bonnaroo. I’m completely fine with this accusation.

If you want to chat, it’s best to having something to chat about. Pick a topic relevant to your niche, something that your audience wants to talk about.

You can identify such a topic through a myriad of ways, but the most natural way is to simply monitor the conversation your Twitter following is already having!

Search a few hashtags related directly to the brand, such as: 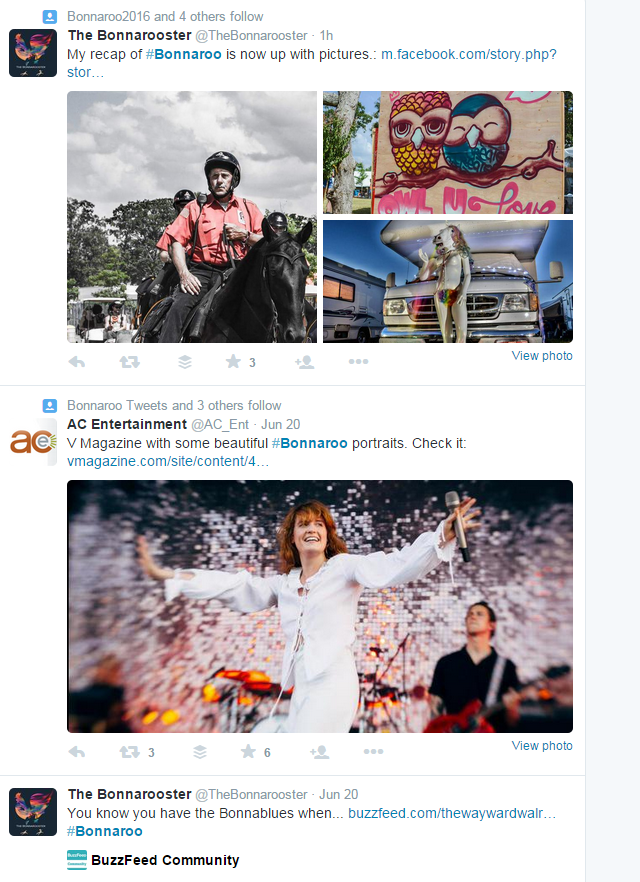 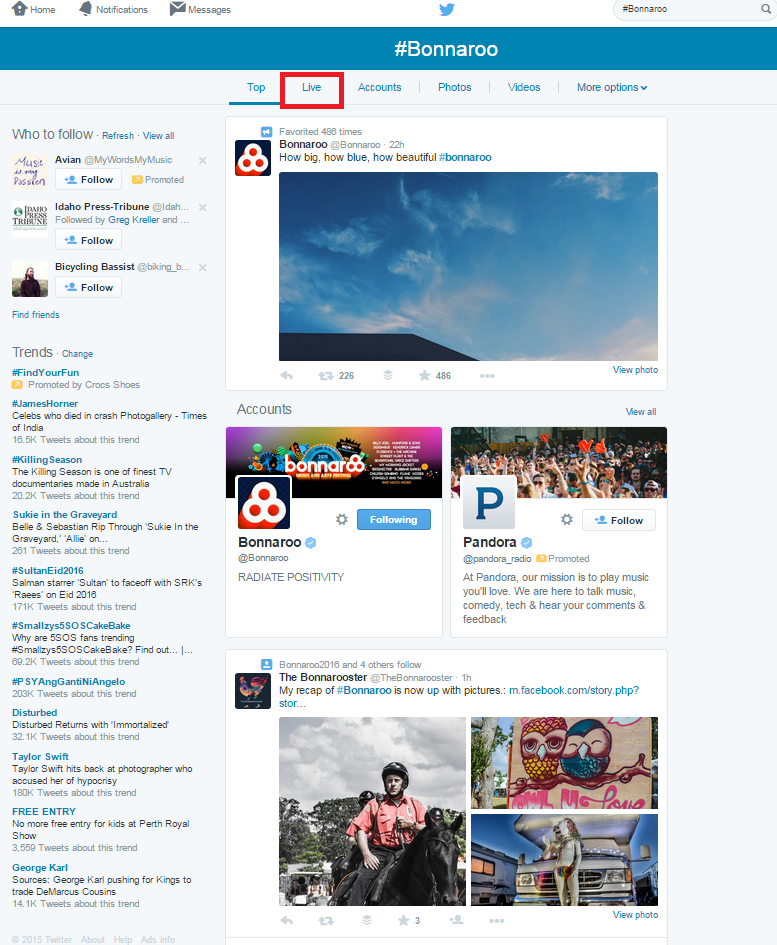 But since you’re looking for the content your audience is most interested in, I’d recommend sticking with top Tweets.

Branded hashtags obviously won’t be available to all brands. A fly-fishing shop in rural Idaho isn’t likely to have it’s own organic hashtag. That’s fine though. You can also do a hashtag search for keywords relevant to the niche, like: 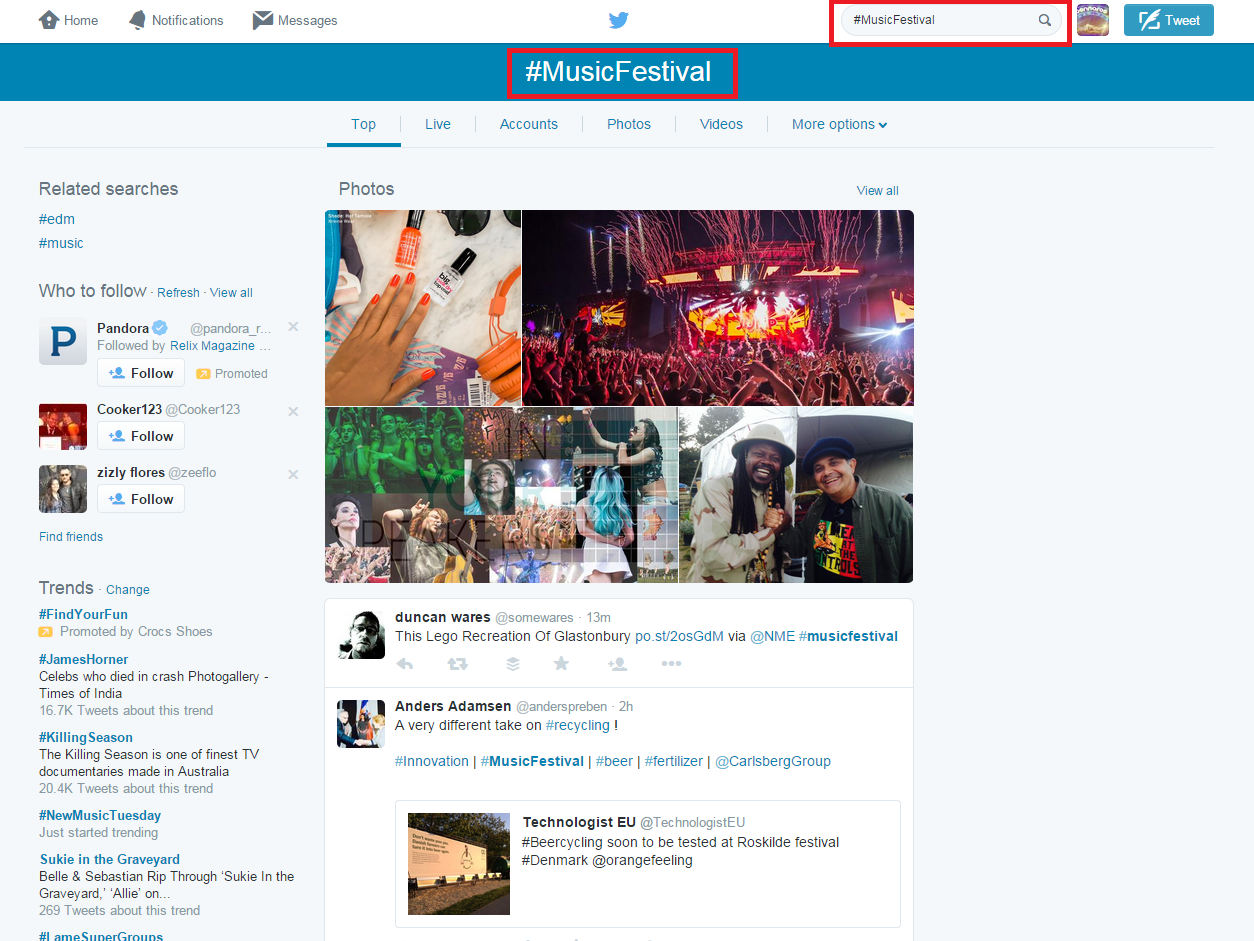 If you don’t want to use Twitter, you can use BuzzSumo to discover what is trending within a particular industry. Here’s a previous Tutorial Tuesday I wrote on that subject.

Because it’s only been a little over a week since the festival wrap, people are still reminiscing about what they loved. For example: 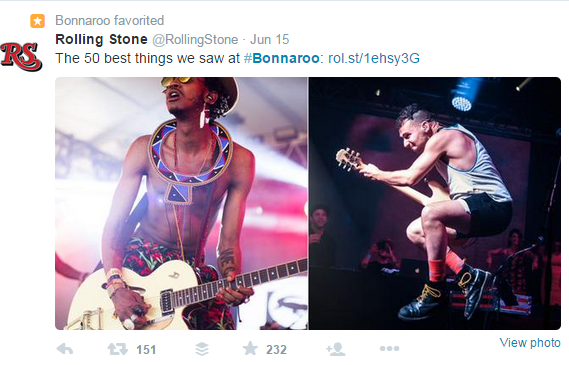 It seems to me that the moment is hot for a topic along the lines of “Recapping Bonnaroo 2015.”

So that’s your topic. Time to pick a featured guest.

Now to be fair, you technically don’t NEED a featured guest. On that same note, Bonnaroo doesn’t NEED a featured artist in their annual SuperJam. The SuperJam--the wildly popular Saturday night show that pairs a series of artists performing over the course of the weekend--can drive an audience on its own accord. They only pick a featured performer because it’s easier to promote that way.

When it comes to picking your guest, here are some tips to keep in mind:

Now, the order I’ve laid out isn’t sacrosanct. You absolutely can pick the featured guest before the topic. In fact, sometimes it will be easier that way. If you seek out a featured guest first, that person may have unique ideas for a topic of themselves.

Finally, pick a time slot. Even a hippie-dippie music festival like Bonnaroo isn’t complete anarchy. They have scheduled times for performers and stages, although people like Kanye West like to think of those time slots more like time suggestions.

When you pick a time, the most important consideration--other than your own schedule--is picking a time you’ll have to yourself. You don’t want to pick a time that competes with another chat. Not only is it somewhat rude, but you’re shooting yourself in the foot. No point in trying to siphon an audience from an established chat, when there are other time slots available to you. Personal aside: I love you Bonnaroo, but next year, try NOT to schedule the two most popular hip-hop shows only fifteen minutes apart.

To pick a time slot, I recommend using tools like ChatSalad or Nurph. These are tools specifically dedicated to Twitter chats. You can learn how to use them here.

It isn’t enough to come up with a topic. If you want to maintain any semblance of control over the chat, it’s important to devise questions that pertain to the topic.

How many questions? Again, there’s no hard-and-fast rule here. Consider this however: you only have an hour. That’s not enough time to ask every single question that occurs to you. If you asked ten questions, that’s only six minutes per question. That doesn’t even include the chat warmup, which can eat up a few minutes.

For #LinkaratiChat, we’ve found that six questions is the ideal amount. That allows for approximately ten minutes per question. From our experience, that’s enough time for anyone who wants to participate to submit an answer. Not only that, but it allows for enough time for followups and conversation between the participants.

Even a seventh question starts to rush the chat more than I care for. And limiting to five questions can produce some awkward dead air.

As for the actual writing of the questions, here are a few tips that I like:

And the third tip: turn your questions into images.

We’re a visual society. Case in point, there are artists I’ve adored at Bonnaroos past because of their show, not necessarily the music. I almost never listen to EDM artists like Deadmau5 when I’m home surfing the net. But when you put me in a crowd of 80,000+ in front of his light spectacle, and I’ll start dancing like there are dead mice right under my feet.

Not only will images make your chat more appealing, but they’re convenient as well. If you ask the question in the form of an image, you save characters. For example, here’s a question in text form: 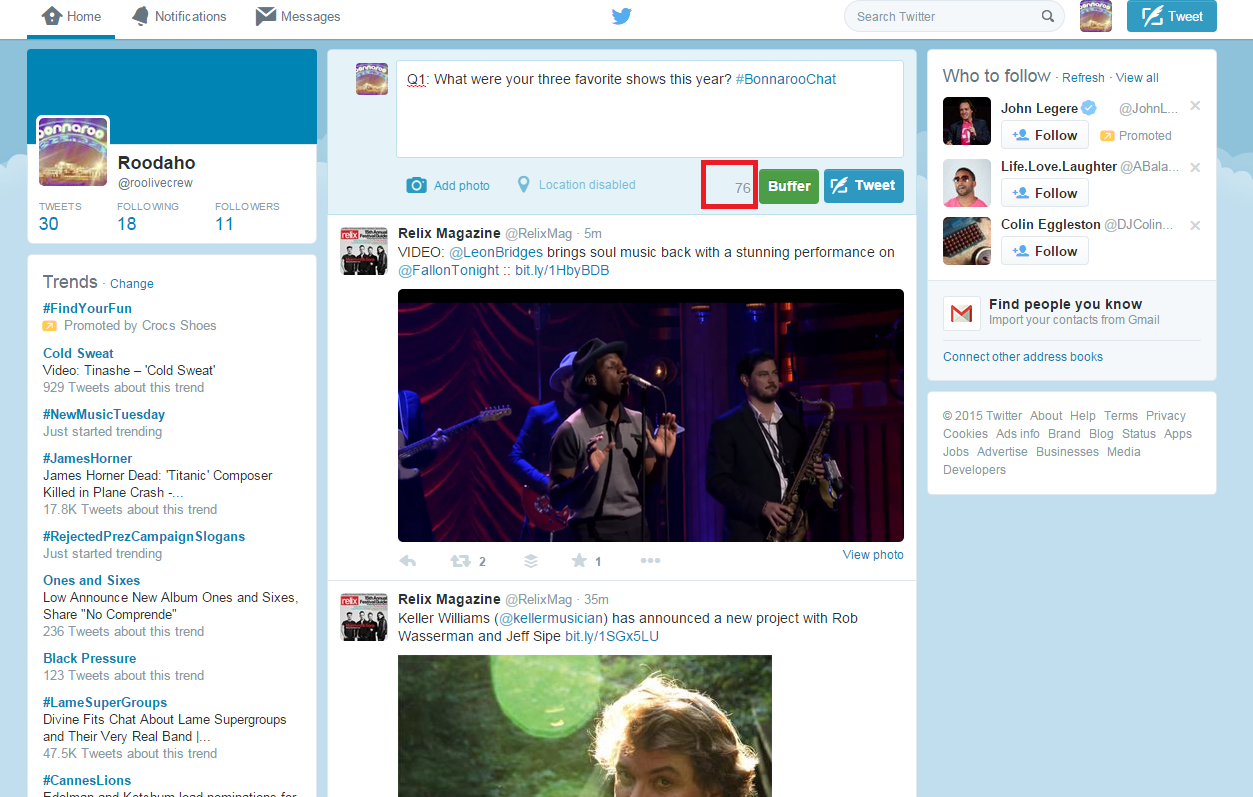 And here’s a question in image form: 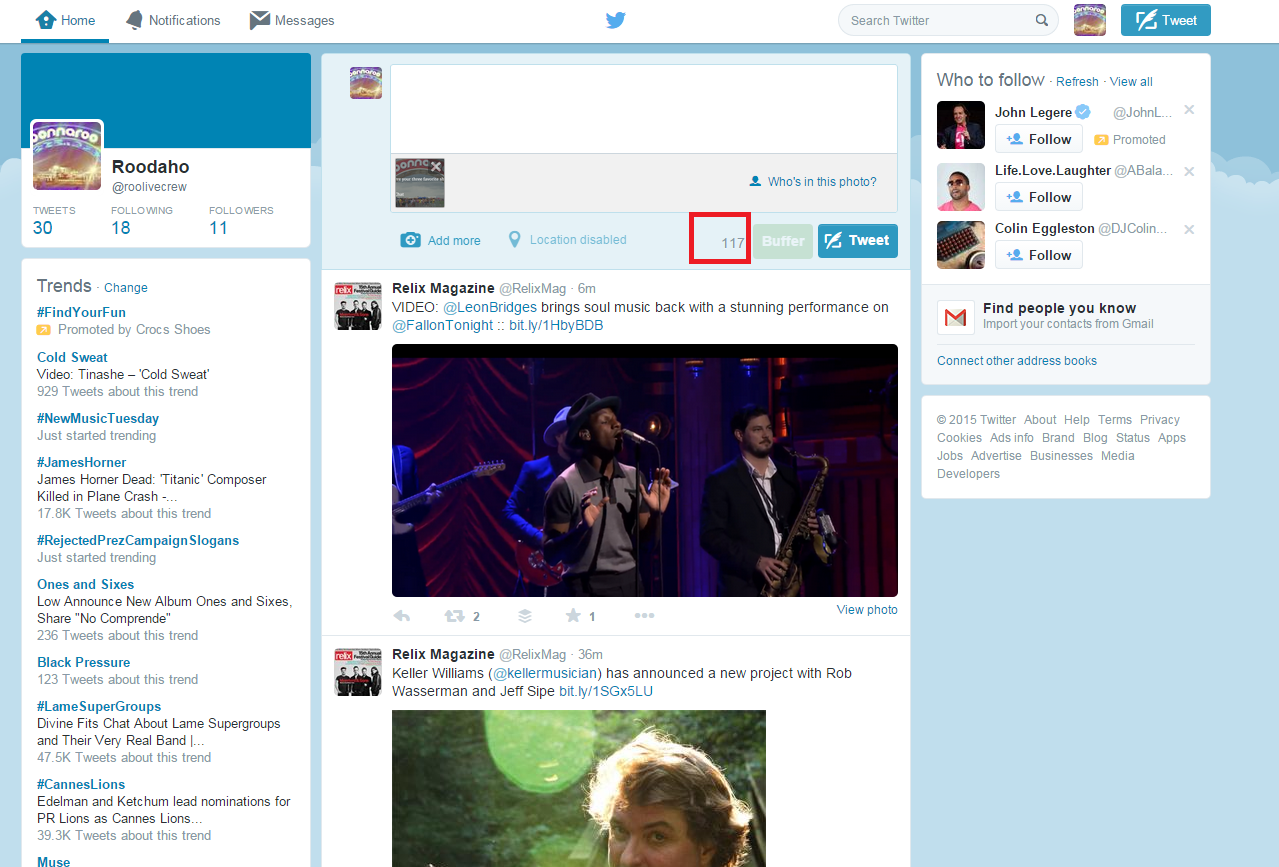 Same hashtag, room for 41 more characters if you need to use them. And for your information:

Aren’t you happy you know that?

But don’t just build images for the questions. Make one for the promotion as well. Have an image ready for the beginning of the chat.

Have one to say goodbye.

I made these gifs--of my two favorite Bonnaroo shows I’ve ever been to--using Imgflip.

Where would you make these images? There are a plethora of tools you can use, but we have previous Tutorial Tuesdays that explain how to use Canva and Pablo specifically.

Even if you have a sizable, built-in audience, it’s still advisable to send out at least a few personal invitations. It establishes the idea that the chat isn’t just for you and the featured guest - the chat is indeed for everyone.

But allow me to reemphasize one phrase: a few. It would be a complete waste of time sending an invitation to everyone who follows you. It’s much easier to send a general invitation from your handle.

However, there are influencers that you should want to participate in your chat. For example, I would want to look for famous Bonnaroovians. Yes, there is such a thing, and I aspire to be one someday.

And hey, I could maybe even shoot the moon and attempt to get former Bonnaroo artists onboard. I doubt I could get a former headliner along the lines of Eminem or Elton John, but there might be an undercard performer or two willing to get onboard. A lot of the musicians are Bonnaroo nerds too.

So now you have a general idea of whom to invite, but how do you keep track of that? Thankfully, Cory Collins wrote this Tutorial Tuesday about building an outreach list in Google Docs.

Twitter chats are growing in popularity. I’m not going to sit here and say they are absolutely essential for your business, but in the social media age, I believe that brands that don’t invest in community building are going to spend the ensuing years playing catch-up.

While everything I’ve talked about might seem overwhelming, I assure you it’s not. Preparation for a Twitter chat will take time out of your schedule, but not a titanic amount. And the ROI you could experience is absolutely worth it.

And hey, not only are Twitter chats great for drawing brand attention, they’re also pretty fun. Not Bonnaroo fun, but nothing is. Now excuse me while I start counting the days until next year.