Every so often, there seems to be another tactic that dominates SEO/link building. Sometimes these tactics start off perfectly fine, but quickly get abused by spammers. Other times, the tactic is clearly an attempt at devious manipulation from the get go.

Despite the nobility--or lack thereof--of the intentions from the onset, Google will not hesitate to throw the penalty flags on the field in the form of manual penalties and deindexation. It seems right now that we’re watching the same show all over again, and it’s happening as a result of private blog networks (PBNs).

The What and Why of Private Blog Networks

The blogs in private blog networks are often resurrected domains, domains that may have had a robust link profile before the original owner decided to sell. Of course, just because the owner sells it doesn’t mean that all of its links go away. Does the mileage on the used car you bought start over? So once the new owner owns sites A through Y, he/she can write content on those sites that will link to site z, the “money site.” And more often than not, the content they generate is worthless.

The purpose of a standard blog network is to trick Google into thinking that a bevy of authoritative and relevant blogs are linking to blog z, flowing enough link equity in blog z’s direction that its chances to rank are increased. PBNs are the poster child for algorithmic manipulation.

Google hasn’t been a blogger’s best friend this year, starting with Matt Cutts’ famous castigation last January. Things became much more hostile when My Blog Guest fell victim to their manual penalty. Jon Cooper was prompted to write this article about scaling back on blogging for fear of incurring Google’s wrath.

And now, SEOs have a new penalty spree to fret over. Despite the absence of any formal announcement from Google--just this tweet from the vacationing Matt Cutts--it appears countless sites were affected by a slew of manual penalties this week for using private blog networks. Sites aren’t just being penalized: some sites are being wholly deindexed.

Not everyone has been hit, however. No Hat Digital did an audit recently and found that only 40% of its network was penalized/deindexed. But in the comment section, the author of the article says this: 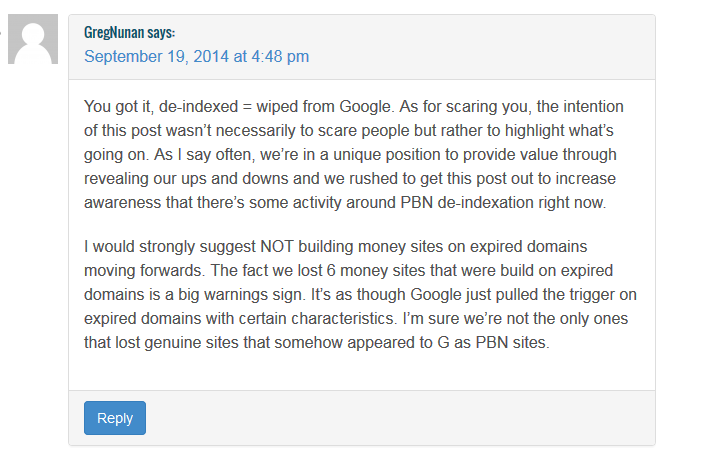 In this comment, GregNunan accuses Google of erroneously penalizing some sites. Spencer Haws of Niche Pursuits, however, claims Google was on the ball this time around.

I agree with Haws that it’s pretty clear that this is Google’s variation of shock and awe in the war on PBNs. He and I may not agree on the next point: I’m glad Google seems to be winning.

Setting up a private blog network for the purpose of continually linking to your own sites maybe is a loophole in the webmaster guidelines, but to me it’s clearly manipulation of the algorithm, and does nothing to better the user experience. These sites serve no useful purpose other than bolstering the owner’s “money site.”

Michael Martinez has some interesting takeaways on the issue as well. I don’t disagree with his main point that reports of PBN death are greatly exaggerated. But the point he raises that I can get behind is that Google is really, really effective at targeting black hat SEO. Today’s manipulative tactics work today, but they can burn you in the end. Google eventually catches on, and as Martinez astutely points out, it’s because:

I don’t know precisely how Google’s webspam team operates, and I never will. To Martinez’ point, they are notoriously discreet. But when this Bill Hartzer article about being penalized for just a handful of links ranked on Inbound last week, Hartzer himself had an interesting theory in the discussion thread:

He is essentially insinuating that the manual team’s job isn’t ALL manual. Rather, they have bots programmed to detect potential manipulation, at which point the site is put under review by the manual team. Seems perfectly logical to me.

Nevertheless, Google is watching. Even if it takes a while, Google finds ways to catch manipulation. And given how much stock webmasters put into search traffic these days, the results of a penalty can be devastating.

Now, in some instances, spammy tactics can be used in non-spammy ways. You CAN still build links with, say, blog comments. But if it’s your sole link building strategy and you’re going about it aggressively, be prepared to find the dreaded manual penalty warning in your webmaster tools.

In this particular instance, I would strongly advise against participating in private blog networks though. Google appears to be keeping close watch on anything that resembles a PBN, and there have been reports of people claiming to be penalized even for just a handful of links.

I like one of the subheaders in Haws’ article: “SEO is Long Term.”

I think sometimes SEOs can forget that a link has the ability to last forever. Want proof? Here’s mcspotlight.org, a site devoted to highlighting the wrongdoings of the fast food megachain McDonald’s. The site was primarily active during the 90s, years before Eric Schlosser wrote his masterful expose or Morgan Spurlock decided to go on a disgusting diet.

Despite the fact that it hasn’t been updated since circa 2002, look here at the company page:

As promised, that link still takes you outside of the McSpotlight domain and over to the site of their sworn enemy.

And once a link is live, Google tracks it forever. Google is like the Social Security Administration for hypertext. If you thought a link is only inspected once it goes live, you’re mistaken: links are subject to scrutiny for as long as Google chooses. That’s why it’s always best to build future safe links, and to disregard the churn-and-burn trend of the moment. Build links that are meant for real people/webmasters and not just Google’s algorithm.