How to Measure SEO Results and ROI 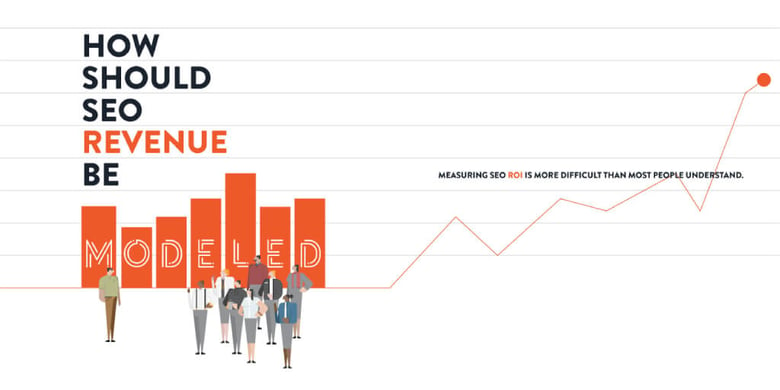 Measuring SEO ROI is more difficult than most people understand.

It sounds simple; just tag your pages properly with analytics code, make sure you're tracking conversions and can associate a dollar value with those conversions, and you're done, right? Not so fast! There is much more to the challenge of SEO ROI than that.

To illustrate the point, I'm first going to explain how it works with PPC. Here is a simple breakdown:

On any given day, the amount of money I spend in paid search has a one-to-one correspondence to clicks to my website, and some of those clicks result in revenue-generating transactions (or “contact us” requests, or some other desirable action). To a large degree, paid search is a direct response medium.

To be fair, there is definitely the concept of deferred conversions that result from paid search too. Someone clicks on an ad and goes to your site, doesn't convert in that session, but comes back at some later time — perhaps by some other means than clicking on an ad — and converts. In PPC terms, we refer to that as an "assisted conversion."

That said, a large part of the realizable revenue comes from those initial clicks, and the cost of the campaign scales in a linear way in relationship to the clicks received. The key deliverable from your PPC spend is clicks from users.

Now, let's look at SEO. To set the tone, let me share how I often explain what an SEO sales pitch is like: "I don't know what I'm going to do for you yet, I don't know how fast you're going to get results, and I don't know how big those results are going to be. Ten thousand dollars per month, sign here." Of course, I'm joking when I put it that way, but there is a real element of truth to that being what an SEO pitch sounds like.

The reason the typical pitch sounds so obscure is that the key deliverable from SEO campaigns is increases in organic search rankings. These gains in rankings then deliver clicks from users on an ongoing basis, often for an extended period of time.

Is it (2M - 1M) / one million dollars = 100%, because that's how much my SEO revenue grew (as opposed to my total SEO revenue) in the same year? I'd argue that this isn’t a good way to look at it at all. Why? Well, one reason is that if I invest nothing in SEO at all, the two million dollars I got in SEO revenue last year will likely be less in this year, yielding a chart more like this for SEO revenue: 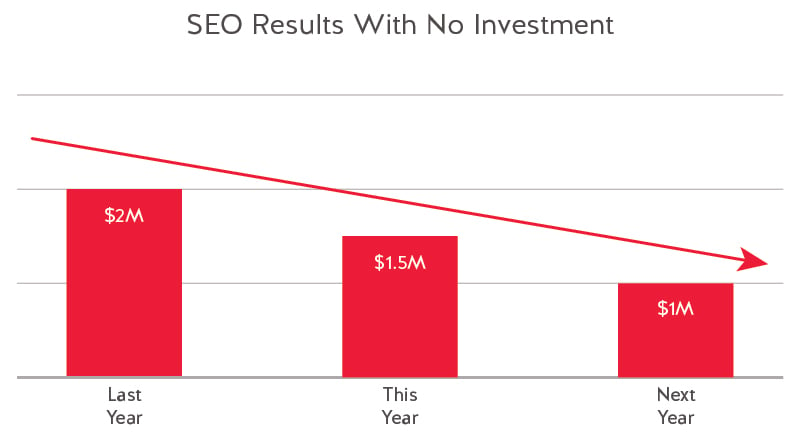 Continue with no SEO revenue for multiple years, and you'll see that number plummet down to near zero. Why? Because your competition is investing in SEO while you're not. Their SEO gains will become your SEO losses. Part of what you're accomplishing with your SEO investment is defending your current levels of SEO revenue.

But there is also a forward-looking part to this story too! Let's go back to my original scenario, where I invested one million dollars in SEO in the current year and saw SEO revenue go up from two million dollars to four million dollars. Now, let's imagine that I shut off my SEO investment in the next year. What happens in that year?

You guessed it: SEO revenue does not instantly drop back to two million dollars. In fact, over time, the yield on that one million dollars in a SEO investment might look like this: 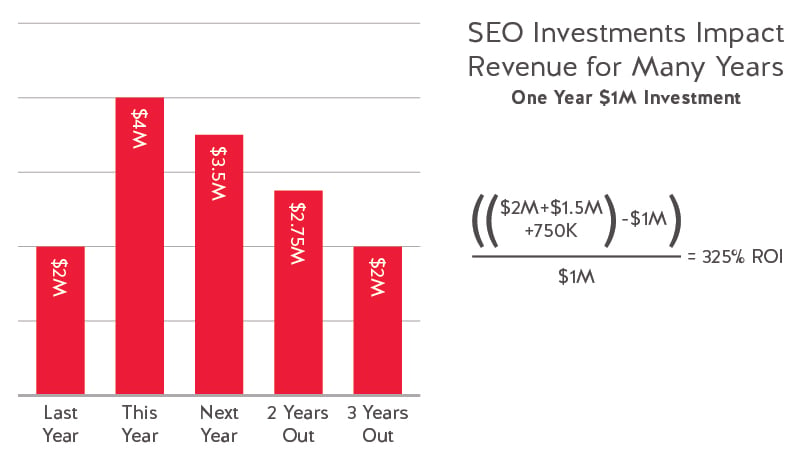 That's one heck of a different picture of SEO ROI, is it not? Oh, and don't forget the fact that in the current year, the one where SEO revenue went from two million dollars to four million dollars, I would have lost 500K dollars of SEO revenue if I hadn't made any investment at all. Now your real SEO ROI looks something like this: 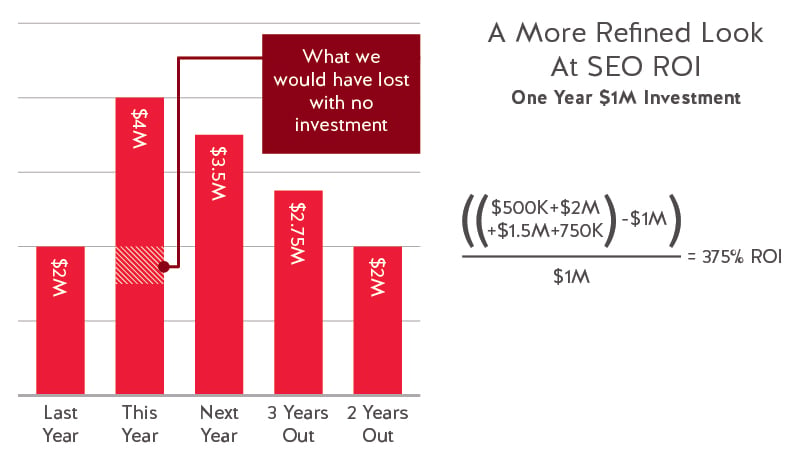 Now that we've established some basic concepts, let's look at a couple of models for SEO campaigns and the ROI you might get.

You did enough to keep from losing ground to your competition. They were doing the best they could to take some of your market share, but failed. Now let's say you would have lost 500K dollars in revenue if you hadn't invested the 250K dollars. Your actual ROI in this scenario would be: 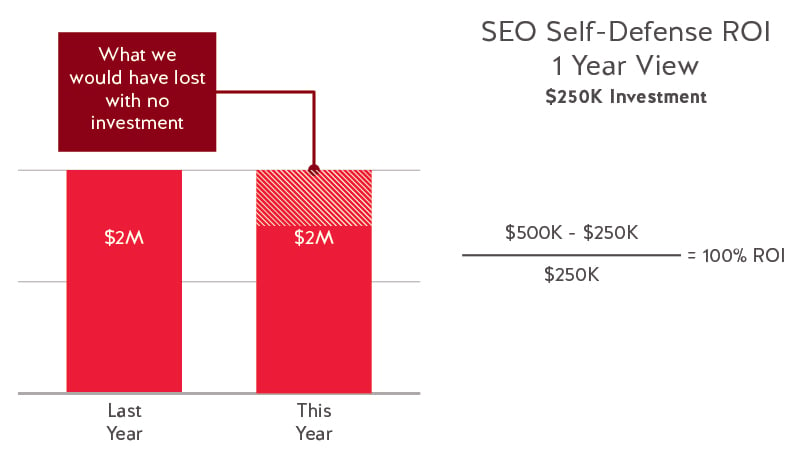 Note that this is the story if you look at this on a one-year basis only. Let's say you invest 250K dollars per year, over two years, and you manage to keep the SEO revenue at two million dollars for both years. Using the numbers I shared above on the “no SEO investment overall multiple years” model, I will have defended 500K dollars of revenue in year one and one million dollars of revenue in year two. The picture of this ROI scenario looks like this: 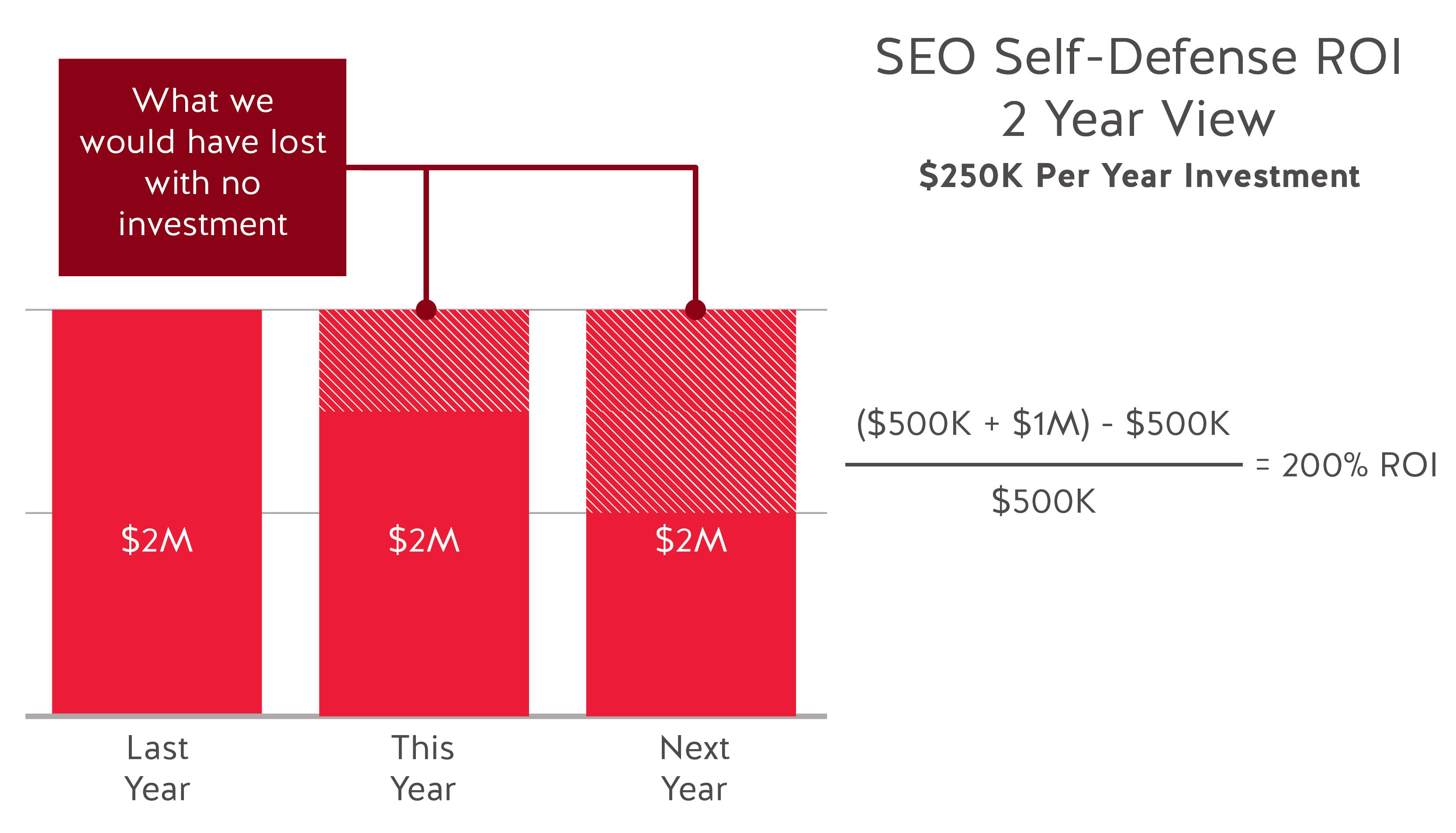 Now you're getting a reasonable model to estimate the SEO investment results when you invest only enough to preserve your revenue, but show no growth.

Earlier in this article I laid out a model that suggested ROI over a five-year period was 375%. Should I walk into a pitch and tell a client we're going to get 375% ROI? Frankly, that would make for a challenging conversation.

If you're an executive, you likely have little interest in a five-year ROI model; what you're able to achieve in this year is probably most important. You may even have bonus compensation programs based on the ROI you can get with your budget in the current year.

However, I also believe that educating yourself and your team on how it works with SEO is important. If you're interested in the business for the long haul, then how it will perform next year should be of interest to you — and your team too, even if it's a secondary interest. Everyone should want to be part of a growing business, not a shrinking one.

For that reason, I'd show a two-year view similar to this one: 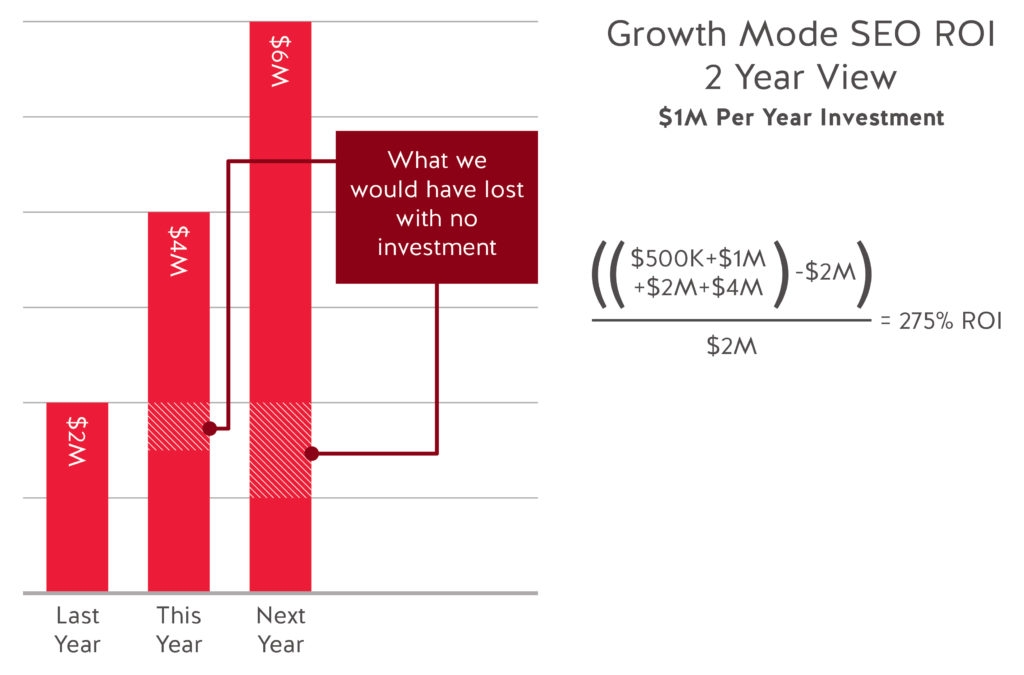 This at least gives you and your management team a view of the bigger picture of how SEO ROI works.

Learn the mindset of who you are going to be presenting the budget to, whether you’re part of the executive team, or just building a plan to present to them. This includes understanding the overall organizational budget and margin goals, and adjusting your budget proposal accordingly. Start the conversation by making sure that your team understands the difference in the deliverables between PPC and SEO. Here is a simple visualization of it:

Once this concept is clear in everyone's mind, the rest of the story becomes quite a bit easier to tell. From here, you can lay out the various ROI models using two, three or even five-year time horizons to show the broader strategic picture, and the one-year ROI to outline the impact on company performance in the current year.

The first step in understanding how to measure ROI is to understand a proper definition for the impact of your investment. As you have seen, this is not easily done in the world of SEO.

In other articles on this blog, you’ll see a lot of invaluable information on how to achieve and measure results. But, along the way, remember the enduring aspects of the benefits of an SEO investment. It’s not contained to a single year in the same simple way as PPC and other types of advertising campaigns.

The more you and your team understand how SEO ROI differs from other mediums, the better, as it will help your organization have the right perspective on the role that SEO investments should play in your overall marketing mix.

Popular Related Posts
How to Get Clients Excited about Link Building
How to Do Keyword Research - A Comprehensive Guide
SEO Mythbusting: Does Google Recognize Click-to-Call as a Phone Number?
Eric Engle

Eric Enge is General Manager of Perficient Digital, a full-service, award-winning digital agency. Previously Eric was the founder and CEO of Stone Temple, also an award-winning digital marketing agency, which was acquired by Perficient in July 2018. He is the lead co-author of The Art of SEO, a 900+ page book that’s known in the industry as “the bible of SEO.” He is a prolific writer, researcher, teacher and a sought-after keynote speaker and panelist at major industry conferences.