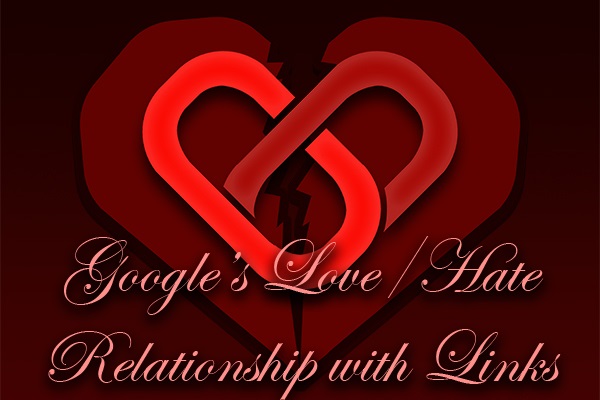 The fact is links present a bit of a double-edged sword for big G. Links can be very useful indicators of authority and trust online, but on the other hand they can also be manipulated.

This presents a bit of a catch-22 for a company that wants to rank the best content/websites for various queries algorithmically. Discerning the spammy links from the “natural links” (the vague description Google gives to links they like) is something Google is constantly wrestling with. Let’s take a look at Google’s love/hate relationship with links and what it means for the future of links in search.

Google’s Search Algorithm is based around Links

From its inception, Google search has always been based around links. Before it was Google, it was BackRub and it used an algorithm which counted backlinks as ‘votes’ to rank websites.

Links are at the very core of Google’s search algorithm.

Links remain significant in regards to search rankings today. Recently at SMX West, the head of Google Search, Amit Singhal, reinforced the importance of backlinks during the keynote interview:

“Links are clearly an important signal about the importance of your content – they are still really valuable. But at the end of the day we look at the holistic picture of how your site, what type of content it has, and so on and so forth. Because you think of it from a users perspective.” – Amit Singhal

(For an in-depth analysis of everything Amit said during his interview, check out this post from Cory Collins.)

Coming from the head of Google search, this is a pretty explicit assertion that links are still very important in terms of search visibility. It makes sense that Google still relies heavily on links. After all, Google is a one billion dollars-a-week business; why would they want to change the core of their algorithm?

“It turns out backlinks, even though there’s some noise and certainly a lot of spam, for the most part are still a really, really big win in terms of quality for search results” – Matt Cutts

This is another strong indication from a top Google employee that links still have a major impact on visibility within search.

Another thing that Cutts mentions is that there is a lot of backlink spam. These are the types of links Google hates.

The “hate” portion of Google’s relationship with links stems from their susceptibility to manipulation. Unfortunately, because links are so powerful they have a tendency to be abused.

While spammers and black-hats blatantly violate Google’s guidelines, even those with good intentions can wind up abusing links. When a tactic returns strong results, SEOs often have the impulse to scale that tactic to squeeze every ounce of link equity out of it they can. Scaling a tactic leads to lower standards and quality which eventually leads to abuse.

Despite good intentions, they scale these tactics to the point that they become spammy and Google inevitably comes out against them. Google is continuously working to update their algorithm to devalue these spammy practices and protect their search results. Google has made scaling these methods worthless and potentially damaging, but with proper application these tactics can be done right.

Algorithmic updates cannot catch all the spam out there though. This is why the aforementioned Matt Cutts and his team have jobs. The webspam team was created to manually combat spam and penalize/devalue it around the web.

Cutts and his team operate primarily by handing out penalties to sites that violate Google’s somewhat vague Link Schemes document. As its name suggests, this document relates to linking activities Google considers manipulative.

The reason Google focuses predominantly on fighting link spam is because links are so powerful in regards to search visibility.

Google is constantly battling link spam because it can directly affect the quality of their search results. Google doesn’t target spammy social media practices because they do not have a direct impact on search results.

Unfortunately because spammers are relentless and continuously abuse links in new ways, Google can resort to questionable tactics at times in their war against spam. One such example is the recent MyBlogGuest debacle in which Google is employing a FUD campaign against guest blogging.

This is another instance where spammers have taken a legitimate link building strategy and scaled it to a point where Google has stepped in. Regrettably Google apparently has no way to detect the junk algorithmically so they are relying on FUD to stop spammers.

The problem with this is that trustworthy sites are now afraid and are placing nofollow tags on all guest blogging links. Nofollowing these links actually goes against Google’s own advice to treat users and crawlers the same. These are editorially placed links that should count as votes of confidence, but are instead being nofollowed.

This exemplifies Google’s love/hate relationship with links as their battle against link spam is indirectly affecting their ability to identify links that would add value to search results.

Google currently faces a bit of a conundrum regarding links. While they currently rely heavily on links for their search results, they also are trying to discourage spammers from abusing those links at the same time.

This presents a paradox for Google as their efforts to dissuade spammers is beginning to impact the links that would be helpful to their algorithm.

Unfortunately, as Google attempts to “break the spirits of spammers” they are also creating a fear around linking that at times robs them of links useful to the algorithm. This creates almost a ‘reverse-pollution’ of the link graph. As people become less willing to link (out of fear of Google penalty) Google will have less data to incorporate into their search algorithm.

My Thoughts on Where Links Stand Moving Forward

While it is extremely hard to predict the future of the ever-changing landscape of search, I’m going to try anyway.

It is my belief that links will remain a primary ranking factor in terms of search results. I believe that links are simply too effective at indicating trust and authority online to remove from the equation completely. In fact, in the Google Webmaster video from before Matt Cutts states that Google has actually experimented with a system that doesn’t use links and the quality of the results became much worse.

Also, there currently aren’t any other reliable signals out there. I do believe there is value in social data and that one day these metrics could possibly be used as secondary signals, but presently there are just too many pitfalls to using them as a ranking signal.

I also believe that Google’s war on spam (and unfortunately, use of FUD) will continue. Currently, Google’s war on spam has many in the SEO realm condemning all manual link building. Those same people suspect that Google will do the same as move forward, but I do not see this happening. Consider the current panic over guest blog links – it is only the cutting edge SEO communities that are nofollowing these links.

You don’t see the Huffington Post doing this (note the links in the author bio for this guest post).

We in the SEO industry have a tendency to forget that we are not Google’s primary concern. If you think about it, the average internet user probably has no idea the whole MyBlogGuest fiasco occurred. This type of FUD is intended to scare spammers and SEOs away from using scalable tactics that Google can’t detect algorithmically.

Google’s primary concern is pleasing their customers (users) to maintain their dominance in search.

At the end of the day, Google was built on links and they remain at the core of their search algorithm. Why would a company that makes one billion dollars a week change the core of their algorithm? This type of decision would seem to have much more risk than reward.

Although Google seems to have a love/hate relationship with links, I think it’s a lot more love than hate.