Google Drops Authorship – What You Need to Know

Despite the recent decline in Google Authorship support – first a drop in the amount of search results displaying Authorship, then a removal of all author photos in search – the cancellation was an unwelcome surprise to many.

Authorship was commonly hailed as the beginning of semantic search, which many SEOs believe to be the direction Google is heading.

What Was Google Authorship?

Google Authorship was essentially a tag added to the end of your content, claiming said content as your own and tying it to your Google+ profile. Google then associated your online profile with your content, allowing you to cumulate and build authority over time – not just with your audience, but with Google as well.

Google Authorship came with a variety of (supposed) benefits:

Google had just cause and good reason to identify authority within various spaces. If they’re able to identify the experts, they’ll be able to return the best possible results for queries relevant to that niche.

So why cancel the Google Authorship when it offered so much potential?

Authors and publishers across the web needed to implement three things in order to receive Google Authorship:

Friction to implement was too high, and benefits too low. Worse, Google did little to promote Google Authorship – they left it to SEOs, online marketers, and their general community to promote the Authorship program.

Eric Enge and Mark Traphagen released an Authorship study of 500 authors across 150 different media sites, where they found 70% of authors made zero attempt to establish Google Authorship on their content across major media websites.

Adoption numbers simply weren’t high enough to give Google the meaningful data they need. That meant that if Google wanted to stick with their Authorship program, they had only one choice: automation.

Google’s gotten egg on its face more than once trying to automate Authorship.

Remember when Truman Capote received Authorship credit in search for a New York Times article? There are plenty of other examples of Google getting it wrong as well; just look at this Google search: 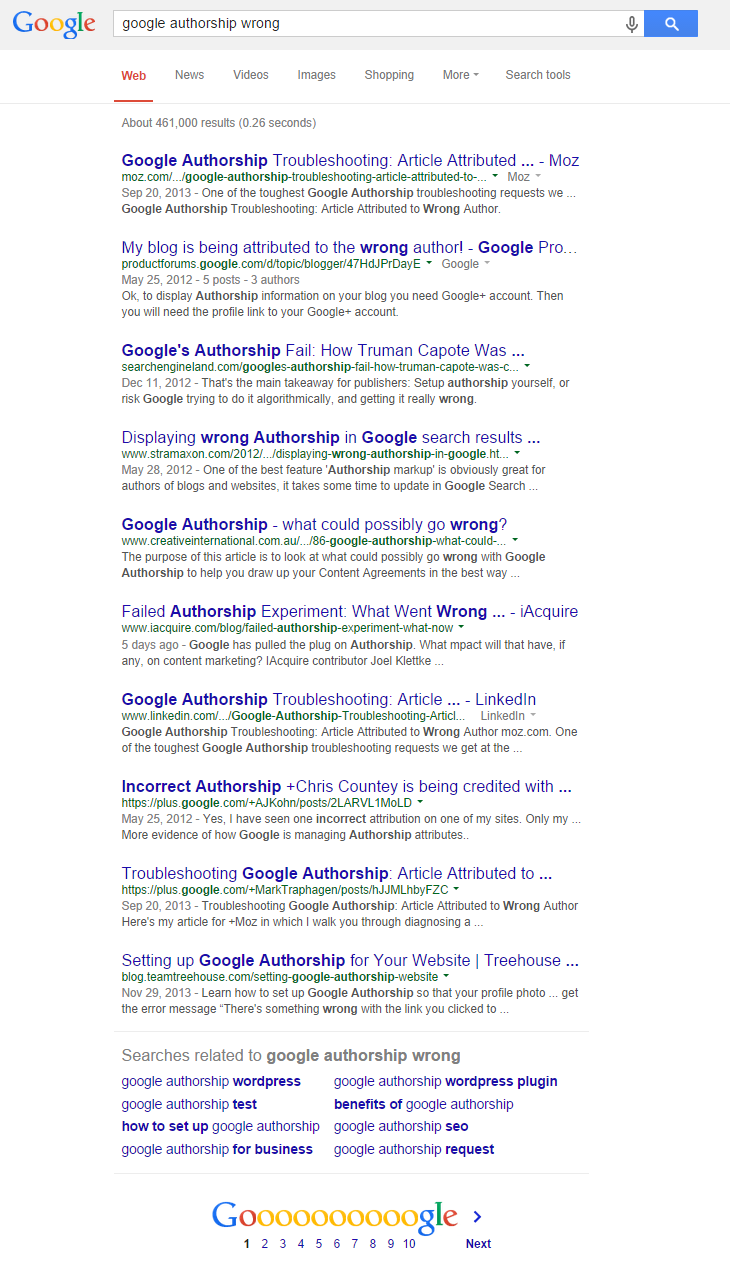 Google simply doesn’t yet have the sophistication to appropriately and accurately auto attribute authorship. The more they tried, the more they got it wrong.

There are simply too many barriers for Google to easily identify and attribute Authorship:

The hardest part is that bylines, author bios, author identification, G+ adoption, none of it is completely standardized across the web.

Does that mean they’ll never be able to automatically identify authoritative individuals and entities? No, of course not. But for now, it looks like the experiment is over.

Perhaps most surprising of all the announcements surrounding Authorship is John Mueller’s claim that “…this information isn’t as useful to our users as we’d hoped, and can even distract from the results.”

This is similar to the explanation given when Mueller announced Google would be removing Authorship photos from search:

“…we’re simplifying the way authorship is shown in mobile and desktop search results, removing the profile photo and circle count. (Our experiments indicate that click-through behavior on this new less-cluttered design is similar to the previous one.)” - John Mueller

This created quite an outcry in the SEO community, largely due to the fact that previously Google had stated Google Authorship as beneficial to the performance of content in search.

I am frustrated @JohnMu saying that it will not cost CTR. Either Google lied about the increase in CTR with photos, or they're lying now.

Mueller also stated in his post about the end of Authorship:

“(If you’re curious – in our tests, removing authorship generally does not seem to reduce traffic to sites. Nor does it increase clicks on ads. We make these kinds of changes to improve our users’ experiences.)” - John Mueller

So despite the many perceived benefits of Authorship, according to Google employees Authorship was at best not affecting search and at worst slowing down Google’s speed in returning results, adding unnecessary algorithms.

Google Authorship is over. Stick a fork in it, it’s done.

According once again to John Mueller there’s no need to strip the rel=author tag from any of your content, so don’t bother with that.

I’m of two minds with the end of Google Authorship:

First, as a writer as well as an SEO I greatly enjoyed the concept and implementation of Google Authorship. It had outstanding ego-appeal, further pushed people to take ownership of their content, and made it even easier to demonstrate a body of work.

On the other hand, as an SEO I can’t help but reflect on the fact that Google’s continuing to struggle to introduce new meaningful signals to their algorithm.

As a group, SEOs tend to be very forward thinking. We’re constantly thinking about the next algorithmic update, planning for new signals, what Google will add to the off-limit list, etc. etc.

Sometimes I think that can really be to our detriment, especially when it becomes obsessive.

Just look at the conspiracy theories flying around concerning the removal of Google Authorship simply to boost search ad clicks. Impossible? No. Highly unlikely? Yes. Google simply has too much invested into providing the best search results possible. They wouldn't remove Google Authorship unless they believed it would improve search.

Authorship had a lot of potential, and ignoring it completely would have been a mistake in terms of future-preparedness. However, all the time spent invested into further building authorship is now out the window with Google’s complete closure of the program.

My point is this: as SEOs, we need to be aware of the adaptability of Google and be prepared for the future, but we owe it to our clients to also work to the algorithm as it is now. SEOs should work to bring strong improvements for today as well as tomorrow.

And honestly, that means links. Google built their algorithm around links, and the more Google discusses links the clearer it is that links will move the needle today and remain a valuable signal in the future.

I’m not saying to pursue links to the exclusion of all else. But if you’re providing SEO as a service and you have no plan whatsoever for link acquisition, you’re doing a disservice to your clients. Links need to be a serious consideration.

It’s exciting to get caught up in new advances like Google Authorship. But being on the bleeding edge can have a price, especially if you forget the basics.

My advice is to be prepared, but don’t forget that Google has been ever changing since their inception, with a few key exceptions:

Links have been core to Google since their inception 20 years ago. Will they change in the future? Perhaps. But for now, if search traffic is important to you, you better have a link strategy in place.

Cory Collins works in strategy development at Page One Power. Cory is a writer, runner, SEO strategist, beer brewer, and lives with his dogs and wife in Boise, Idaho. Cory's super power is eternal curiosity.