I have a confession to make: I’m pretty close with the employees at Google.

An unfortunate truth for all SEOs is that we don’t have any first-hand knowledge about how Google’s algorithm works. We have case studies for days, and we can draw conclusions from them. But it’s not like we really have any access to their most sensitive information. You’re thinking of Sony.

So no, we can’t definitively state how the algorithm works… until now.

Because I’m such an influencer in the SEO sphere, my friends at Google gave me inside information about the ranking signals of the future. It’s my responsibility as an SEO to keep you informed about the algorithm changes that are coming. 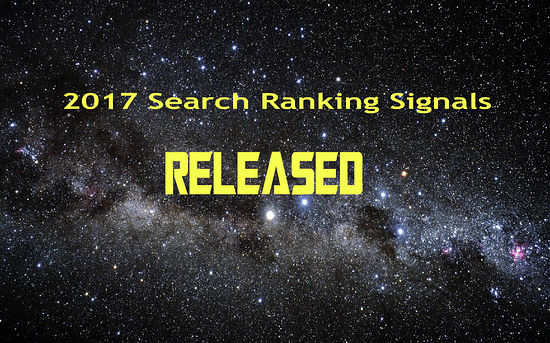 1. Clickbait Headlines or: How I Learned to Stop Worrying and Love Myself After Reading Tip #4

Google’s CEO Larry Page is still pissed that he knew about Will’s death on The Good Wife before he had a chance to watch it on his DVR. You’ll have a better chance of ranking if you put in the proper spoiler tags before Page watches the Real Housewives of Atlanta episode where Kenya and Phaedra make up.

3. Amount of Money Google Bought it For

In five years, after Google decides to finally just go for it and buy every single website, they’ll start ranking sites according to how much money they spent. The same way your pretentious hipster friend displays his most prized David Bowie vinyls more visibly than the forgotten krautrock records he found at the thrift store.

Sorry you’ve spent all this time figuring out how to get people to retweet your content or how to manipulate Facebook’s news feed algorithm. In a surprise move, likes on Myspace from ten years ago are going to be far more important for your SEO endgoals. Linkin Park will rank for every query ever.

If you run a website, and you host an article written by the extraordinary Jesse Stoler, your site will rank in the top five for the most competitive queries. All you have to do is hire Jesse Stoler to write content for your site. You can request Jesse Stoler’s services here. Or here. Here too. He accepts all major credit cards, checks, cash, PayPal, and chocolate oatmeal stouts. He doesn’t understand BitCoin, so if that’s all you can offer, keep walkin’.

Sorry SEOs, but you have this one all wrong. Yes, there’s an update on April 21. No, it has nothing to do with users on mobile devices. If you’re website doesn’t cater to the 194,899 citizens of Mobile, Alabama, you’re screwed. How many ways can you stuff the words “roll” and “tide” into your URL structures?

7. Online Gambling Pages Where You Can ONLY Bet With Money You Received from a Payday Loan Site

You didn’t see that coming, did you?

I don’t want to say that Google is petty, but you’ll be doing your website a favor if you can sneak in catty and slanderous references about their major competitors in tech.

“Oh cool, Apple is trying to appeal to the young crowd by giving away U2 albums. Next year, they’re going to promote the Apple TV by announcing they come with every episode ever of I Love Lucy. Or because it’s Apple and they never miss a shameless branding opportunity, iLove Lucy.”

9. Kickstarter Campaign to Buy Gary Ilyes a Yacht in the Shape of a Penguin

Feature a widget in your sidebar that raises funds that will allow the new head of the webspam team to buy his maltese falcon, and you’re going to be on the first page. If you think a yacht in the shape of a unicorn is too lavish, he’s also been keeping his eye on the outrageously priced Apple Watch (don’t tell his boss.)

10. AdWords… Tattooed On Your Face

Currently, your PPC ad buy does NOT influence organic search rankings. But in five years, once Elon Musk has converted all of our brains into computers, the human billboard guy will be a relic of the past. The more impressions you pay, the higher your webbrain will rank.

Even if this doesn’t become a ranking factor, you should be uploading these anyway.

You thought your delusional, elderly next door neighbor was just hoarding cats. In reality, she’s the next generation online tycoon. Or at least she will be, once she figures out how to put her Polaroid pictures into the computer box.

You didn’t know you wanted it until this very moment.

Because even Google needs a pick-me-up after a public failure. Google will reward you if you write a positive review of their famed wearable.

15. Quizzes to determine which New Girl Character Are You

“Who’s that girl? Who’s that girl? It’s…. Schmidt? Oh come on, I’m not THAT narcissistic, am I? I’m more of a good-hearted guy, like Nick. I have my faults, but I’m always gonna be there for you.”

Yes, I watch way too much of this show.

There was a time when movie theaters invested in smell-o-vision, a technology that allowed gave patrons scratch-and-sniff cards so they could enjoy the film with an additional sense. That practice is obsolete now, thanks in no small part to the fart as a family scene from The Nutty Professor.

To add to the online experience, smell-o-net will be invented, and it will be essential for your SEO. In a related story, the website for the state of New Jersey will be deindexed.

If you don’t think Google is investing in drone technology, you must be one of those people who thinks your Congressman is actually working for the public good and not malevolent corporate interests. How cute.

Everytime you laugh, the microphone in your smartphone will pick up that sound, and Google will measure it and use those laughs as a signal. So if you didn’t think Buzzfeed was annoying enough already, wait until they insert a laugh track that plays with every gif.

Google is like your parents when you move away from home: they can know everything about you, but somehow they still want to know more. Sites will be rewarded in the SERPs for asking seemingly random, yet deeply personal questions for newsletter signups. They’ll earn rankings after selling that information to Google. As of tomorrow, our Linkarati newsletter signup will ask how you how many alcoholic beverages you consume on average in a month. At least now you know why.

Your site will have a better chance of ranking if you invest in Google’s new and innovative technology, Gallop. It’s a small button that will allow you to buy household essentials in the blink of an eye. NO, IT’S NOT ANYTHING LIKE AMAZON DASH, OKAY?! STOP SAYING THAT!

The Internet is famous for being more racist than even a Sigma Alpha Epsilon house in Oklahoma. Google is making plans to release an algorithm that will act as a vigilante in the fight against online epithets. The algorithm is ready, but Google execs are dealing with internal backlash after asking international employees to write down the slurs they deem most offensive.