Google has unveiled it’s long anticipated rewrite of the Penguin algorithm… kind of sort of maybe.

On Friday October 17, some SEOs noticed volatility in the SERPs. Sites that were previously punished by Penguin were all of a sudden regaining rankings. There was no confirmation from Google about the catalyst for the shakeup (hardly atypical). Nevertheless, a general consensus seemed to form: this was Penguin 3.0.

There’s been a ton of breathless anticipation for Penguin 3.0, and what havoc it may wreak. Back in August, Chuck Price wrote this article on Search Engine Watch. 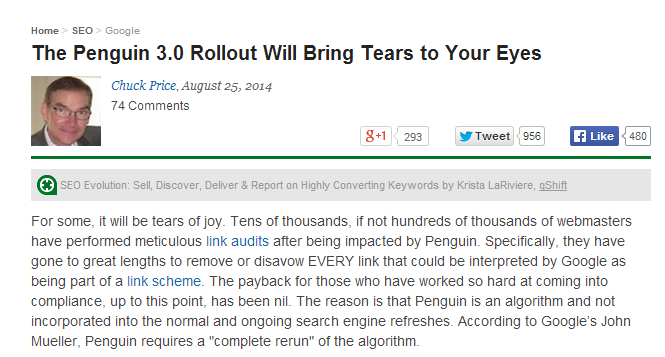 It’s a good article, even if I’ve never been fond of hyperbolic clickbait headlines. You don’t see it in that screencap, but Search Engine Watch used an image of a grim reaper penguin as the featured image when this post was on the front page. 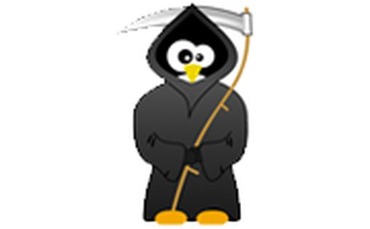 For an image representing the most notorious doomsayer in folklore, this is pretty darn cute. That’s an adorable penguin. Not all artist renderings of Google’s Penguin have been nearly as cute. For example: 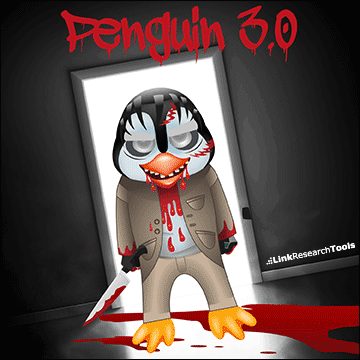 In the 2-3 days, there was little content about Penguin. This is unusual. SEOs have been accused of many things in the past, but “not providing enough content” has never been one of those accusations.

This could be because no one noticed the volatility in the SERPs until late Friday. In political circles, Friday is known as “take out the trash day.” It’s the day when press secretaries release potentially unflattering stories about their bosses. Why Friday? Because fewer people keep up with the news during the weekend. It’s all about timing the news cycle.

It wasn’t until Monday morning that John Mueller, Webmaster Trends Analyst and unofficial Matt Cutts substitute, confirmed that the Penguin rollout was over. Hallelujah! Affirmation that Google finally rewrote Penguin AND that the worst was over.

Hold on. Slow your roll.

Jon Mueller isn’t the only Webmaster Trends Analyst at Google. There’s another guy named Pierre Far out of England. On Tuesday morning, he posted this on Google+. 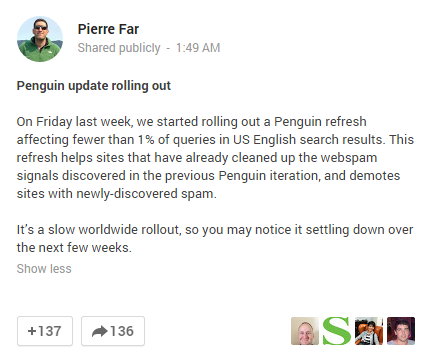 There are a lot of important things going on in this 63 word post. First, it’s a refutation of Mueller’s claim that Penguin was over. In fact, as Penguin continues to rollout, Mueller had to roll back on his claims from Monday morning. 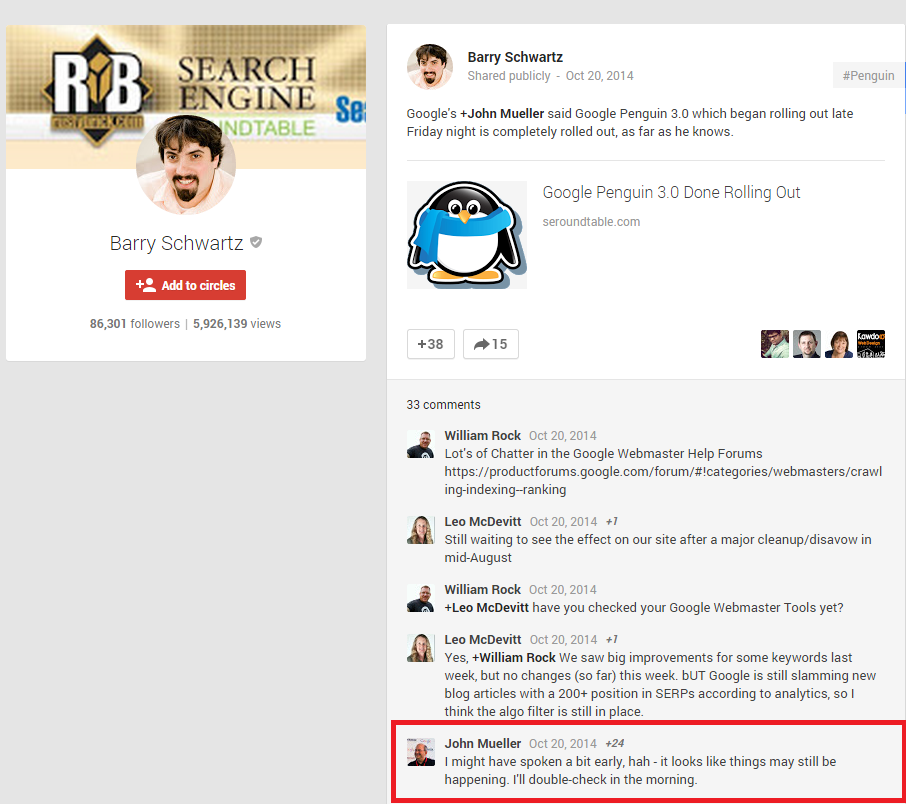 So the mighty search engine can’t seem to get its message straight about a refresh of it’s most impactful algorithm. How, um, refreshing.

Secondly: yes, refresh. Using the word “refresh” indicates that this isn’t the Penguin 3.0 we may have been bracing for. A refresh simply means that they ran all the old data they already had to accommodate current backlink profiles. That means there were likely no new signals added or subtracted from Penguin 2.0. That’s not a sequel, that’s a remake.

It’s also interesting that he mentions the percentage of queries impacted by the refresh, less than 1%. Now, when you consider the amount of daily searches on Google, that means that the refresh still affects as many as 34 million searches a day. That’s a lot, but allow me to highlight MozCast.

Since the start of this rollout, the peak temperature has been 77 degrees. In the month prior to October 17, there were four days that had higher temperatures. That’s an average of one day a week in which the SERPs were more tumultuous than what we’ve seen since the Penguin refresh.

The days have been hot, but Google has hovered many a cloud over our judgment. Is this Penguin 3.0 or Penguin 2.2? It’s still difficult to say. There are a lot of questions. My question: if it’s merely a refresh, why does this need a “slow rollout?”

When it comes to the refresh/rewrite dilemma, Jenny Halasz posited an interesting idea in the comments section of SEroundtable.

It’s an interesting theory, that Google may have attempted a radical transformation that came out far uglier than anticipated. Even if I’m not sure I quite cosign with Halasz here, it would serve as a powerful tribute to the remaining value behind links.

Whatever numerical iteration of Penguin this is, we can all agree that this is long overdue. Penguin 2.1 just had a birthday. That was just a refresh. The more impactful Penguin 2.0 marched back in May 2013, seventeen months ago.

Imagine you are a site that got Penguin slapped (not nearly as cute as it looks in the wilderness).

Google first introduced the Penguin algorithm in April 2012 in an effort to combat link spam. If the algorithm determined you had an unnatural link profile, it effectively killed your website’s performance in organic search. Many businesses depend on this search traffic: the Wall Street Journal wrote about one such business in the aftermath of the first Penguin.

If that isn’t enough, there was absolutely no way to recover from Penguin until an update was performed, and Google always remains tightlipped about the date of the next rewrite/refresh. This means SEOs/webmasters are left working, waiting, hoping.

But as of this past Friday, that working, waiting, hoping may be over.

As I’ve previously stated, we don’t know a whole lot about what this Penguin has done to this point. What we do know is that there has been some good news for previously punished sites.

Check out this thread on Reddit called How are you breaking the news to clients? Anyone who saw the subject header of this thread would not be wrong to immediately assume that the update has caused a ton of damage. No one seeks advice for breaking good news, just the bad stuff. But if you look at the comments, it appears a majority of these redditors don’t need such advice. More commenters report positive impacts than negative impacts, and the negative reports concede the reasons they may have been hit (poor backlink portfolio, automation).

Now, it would be irresponsible to draw all of your conclusions about Penguin from nine comments on a Reddit thread, but it’s interesting nonetheless. Also, it’s consistent with other reports:

There’s always going to be good news for some with updates, bad news for others. Since this refresh is still “rolling out,” it may be a while still before we can fully comprehend the impact of Penguin __.

Yes, that’s a fill in the blank. I purposefully left that there. Fill it out however you want. I myself am not sure how to. It’s unclear to me whether this is 2.2 or 3.0 or 33 1/3 or whatever. All I can say with any amount of certainty is that this is not the Penguin we were expecting.

Chuck Price’s article got a lot of attention. 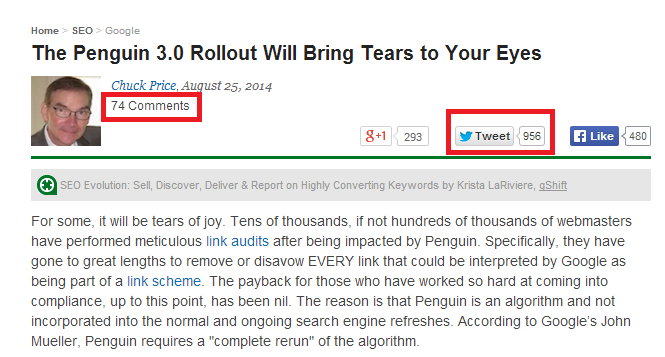 I was a journalism student, and I’m here to tell you that it’s true: fear sells.

But in truth, there may be something to fear still. I don’t know: I don’t work at Google. If this is indeed a slow rollout, who knows what’s coming next. Or maybe this is just Penguin 2.2, and we’ll have to wait for the calamitous effects of Penguin 3.0 for yet another seventeen months.