The Mysteries of Pigeon

In SEO, "Pigeon" is the word of the industry right now. Starting late last week, everyone has been talking about pigeons. Everyone except Google, that is.

Google has been tight-lipped about the Pigeon up to this point. 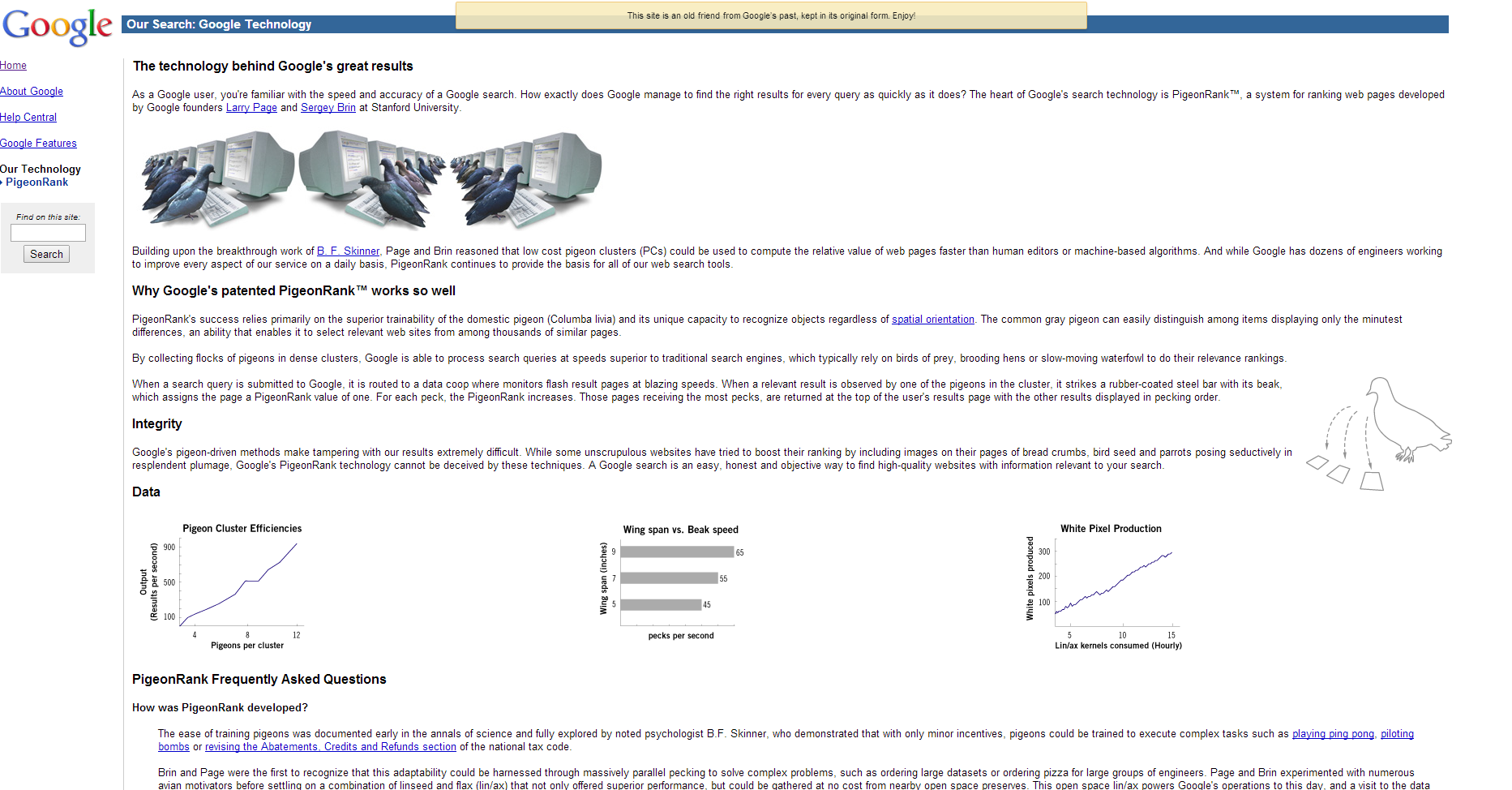 This was an April Fools Day prank on the part of Google back in 2002. They attempted to convince users that Google’s search results weren’t determined by a complex algorithm, but instead by pigeons. Google has a weird sense of humor (and I personally kind of dig it).

Of course Google isn’t operated by birds: you’re thinking of DuckDuckGo! So why have the words Google and Pigeon binded together again since last week? It’s because Google has seen it fit to tweak their algorithm again!

SEOs are calling it Pigeon for now, even though it’s an unofficial title for the moment. Not only has Google not named the update, they haven’t even officially announced that an update even happened. If you haven’t heard, Matt Cutts went on four months vacation. Or he’s fighting the almighty Arianna. Whatever you want to believe is up to you. While he’s away, it’s up to us as SEOs to follow in Google’s ornithological footsteps.

Pigeon is an update that affects only local search, but does so in pretty dramatic fashion. Over the last week, bloggers have reported the mysterious vanishing of notable Google features, and a rise in visibility for a site that wasn’t exactly Google’s best friend not too long ago. Here’s what we know to this point.

One feature we’ve come to know in local search is the 7-pack. No, a 7-pack is not what Mark Wahlberg calls his abs; nor is it the Spinal Tap solution for packaging more beer.

A 7-pack is the bundled section on a search engine results page that lists several local business relevant to your search. Chances are you’ve seen one before, you just didn’t know it had a nickname. 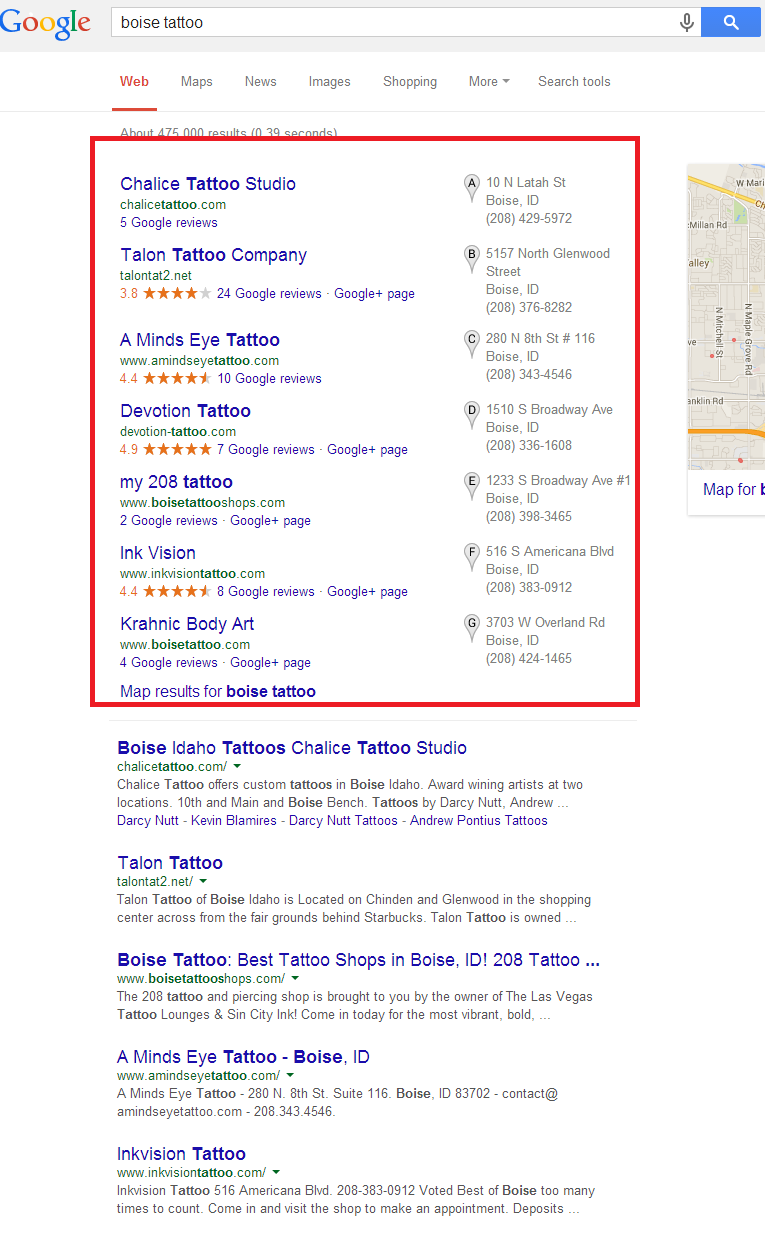 Note: 7-packs are the most frequent occurrence, but packs can appear in 3s and 5s as well.

No matter the size of the pack, you may not to remember that nickname for much longer, because there has been a precipitous decrease in the visibility of these packs in merely a few days. According to Jennifer Slegg at The SEM Post, the amount of queries that showed 7-packs dropped by 7% in just two days. Considering the amount of queries that are entered into Google every day, that means local 7-pack results disappeared from hundreds of thousands of searches overnight.

Even before Pigeon, 7-packs wouldn’t show up for just any query. If you were to do a search for, say

Your search wouldn’t experience the ramifications of the Pigeon. Note: writing about SEO has led me to write a lot of sentences I never thought I would write, including the previous one.

This is why many call 7-packs “local 7-packs.” This is because they are designed to only show up for local search queries. The rapid disappearance of 7-packs consequently could take an enormous toll on local businesses who depend on search visibility. Most local businesses are ill-equipped to adapt to such a stark adjustment in the SERPs.

It appears that the packs are disappearing for specific keywords as well. According to Darren Shaw at WhiteSpark, they’ve concluded that packs have been erased in searches for mold removal, dui lawyers and emergency plumbers. This seems rather random to me.

The packs haven’t been entirely erased for such searches as evidenced by this search for “plumber San Francisco.”

The 7-pack is there, but all the way at the bottom of the SERP. This is highly unusual. Truth be told, I’m not sure I’ve ever seen this. Nor have I ever seen a page this dominated by Yelp. If you didn’t notice, EVERY result above the 7-pack links to Yelp (more on that later).

It’s not only the 7-packs that are vanishing: the carousels are as well.

This is a carousel: 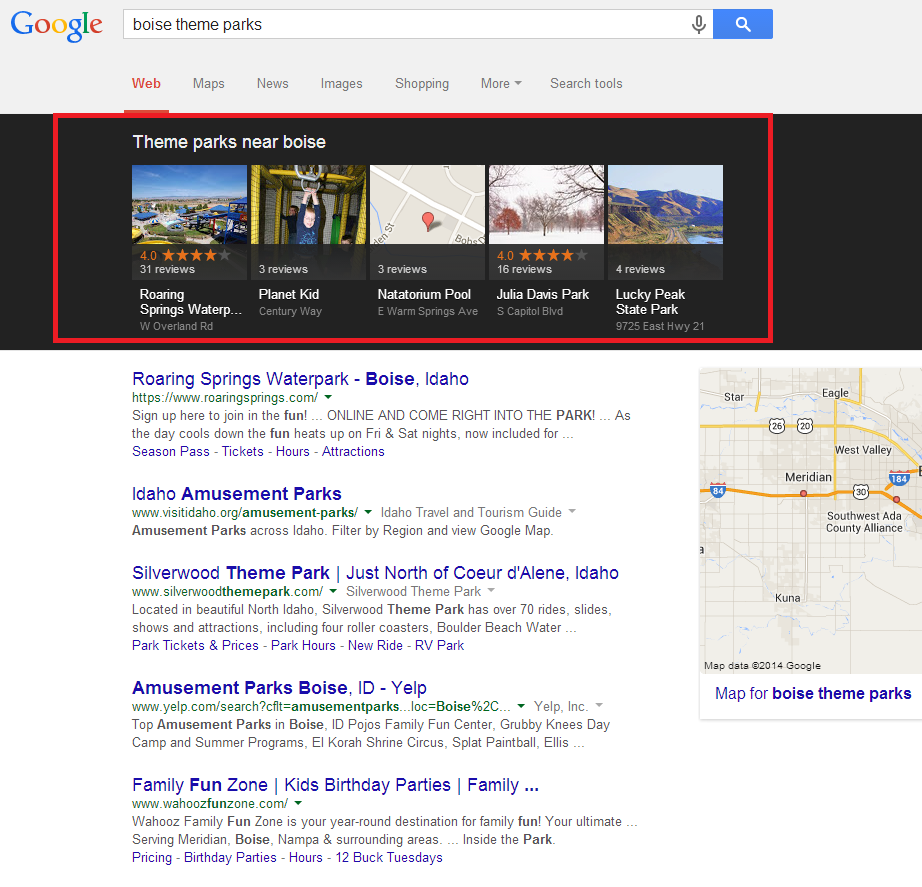 Even with “theme parks” in the search term, not a single picture of a carousel. How’s that for irony?

It’s entirely possible that the Google carousel is endangered as well. Again, according to Jennifer Slegg, the visibility of the carousel dropped by about 14%.

The carousels and the packs aren’t wholly gone though. How do I know that? Because the images in this article come from searches done post-Pigeon (dibs on that band name). So what exactly is Google looking to accomplish with this update? At this point, it’s impossible to say. Hummingbird has been in place for almost a year, and SEOs are still trying to wrap their head around it.

Yelp! I Need Somebody

One thing is for sure: Pigeon appears to have greatly benefited Yelp.

Earlier this month, Yelp accused Google of deliberately obfuscating search traffic away from their site . According to this study--conducted by Yelp--Google was listing a G+ rich snippet above Yelp for local searches, even when the search had “Yelp” in the query. I have trouble believing this study. Even if Google was ranking itself above Yelp for such queries, the fact that a user explicitly searched for Yelp leads me to believe that that person would click on the Yelp result. Call it a hunch. Or deductive reasoning.

Inadvertently or not, Pigeon seems to have increased Yelp’s visibility in local search. Yelp has been lifted to the top of search queries they were not #1 for before. Yelp is not the only local directory to have benefited from Pigeon: all local directories appear to have benefited. Everyone deserves a Yelping hand now and again.

Despite their fondness for collecting data on others, Google has cultivated a reputation of being a fairly clandestine organization. Their cloud of secrecy over Pigeon only furthers the cause of them being, um, pigeonholed as such.

We can see that the packs and the carousels are being eroded. We can also see that other local listing services have been propelled in the SERPs. Outside of that, it’s hard to say what Google’s next move is, and when it might be. There hasn’t been any breaking news in authorship since the headshots disappeared about a month ago. At least Google announced that change; they’re still mum on Pigeon.