Why is Google So Dominant?

After being informed that his company is doomed to lose billions of dollars in the morning, and that he is liable to public crucifixion, CEO John Tuld (Jeremy Irons at his hammy best), waxes philosophically about his industry. 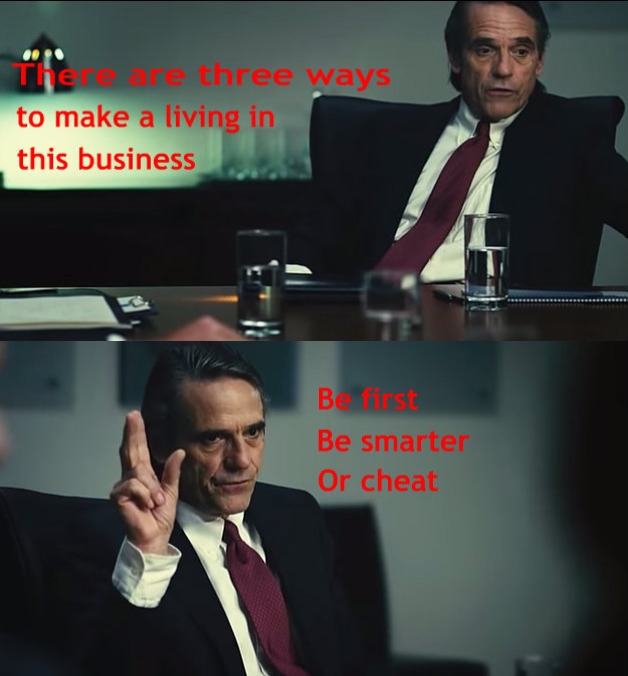 Google was not the first search engine, not by a long shot. Before Google, there was Lycos, Yahoo, Excite, AltaVista and many more.

Google played by John Tuld’s second rule: be smarter. I’ve never met either of them, but by all indications, the founders of Google, Larry Page and Sergey Brin, are two of the smartest men in America. They didn’t conceive the concept of the search engine, but they did fine-tune it. It’s the same way Mark Zuckerberg isn’t the founding father of social media, yet he is the face of it (much to the chagrin of Myspace’s Tom).

Before Google was Google, it was BackRub, and it was exclusive to students and faculty at Larry Page’s alma mater, Stanford… for about a year. BackRub’s popularity grew to the point that Stanford’s server could no longer support it.

So what set BackRub apart from other search engines? Simply put, quality of the results. Other search engines crawled web content to deliver results for relevant queries. BackRub based its algorithm on the importance backlinks. BackRub treated a link like it was a vote of confidence from the site linking. In BackRub’s algorithm, a link from site A to site B was an endorsement; a seal of relevancy and trust.

This algorithmic model was incredibly popular, and in less than two years, Page registered the domain google.com. So in a sense, Google did adhere to John Tuld’s first rule as well, in that they were the first search engine to use backlinks as a primary ranking signal. This is a standard practice now. 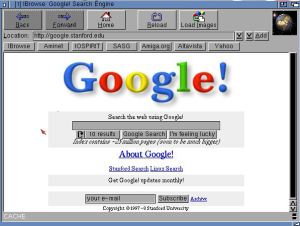 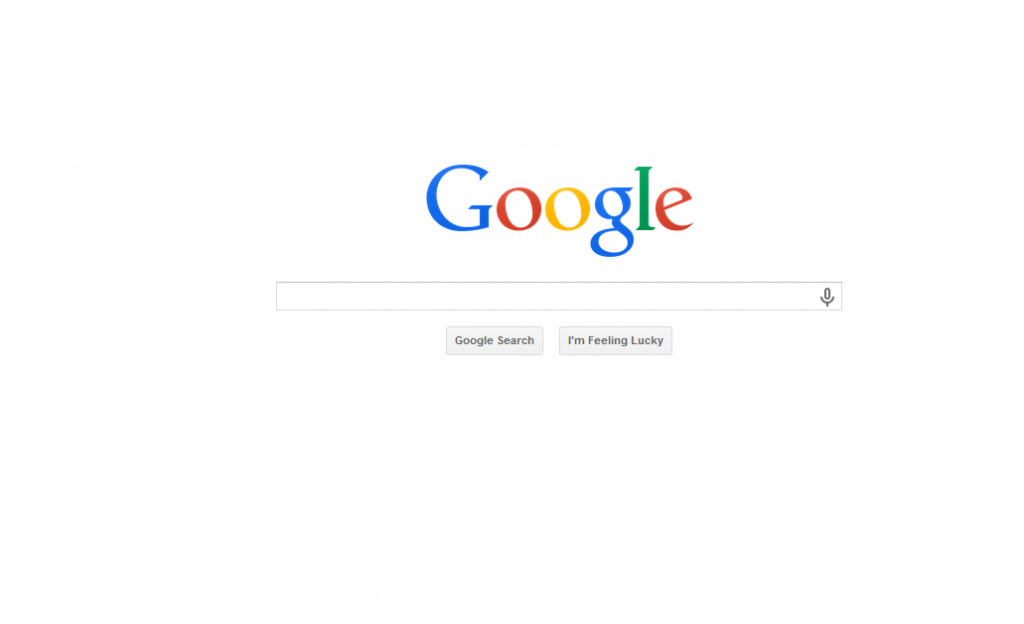 It’s a much cleaner look to be sure, but I’m befuddled as to why they shed the exclamation point. After 17 years, they have A LOT to be excited about.

Needless to say, Google is no longer just two Stanford undergrads in a garage.

As of early 2014, Google controlled 67% of the search engine market share. To give you an idea of what kind of dominance that is, McDonald’s, the first restaurant that comes to my mind when I think of fast food, controls roughly 49% of the fast food market share. Nike, the brand endorsed by the most popular athlete of my lifetime, controls 54% of the athletic apparel market. Very few brands, if any, dominate to the extent that Google does.

So is it all about quality? Maybe. I myself believe that Google is the superior search engine. Bing claims that searchers prefer them by a two-to-one ratio. Bing of course came to this conclusion after conducting their own experiment. I hope you don’t mind my saying that they are hardly impartial.

I use Google, and I’ve used Google for a long time. Every link I’ve put in this article to this point has been content I’ve found via Google. Despite the outrageous textbook fees, I easily spent more time using Google than using my textbooks every final paper season in college. A textbook--as well-written as it may be--is just one book. Google is the digital Library of Alexandria at the command of my fingertips.

I’m out of college now, but my reliance on Google is as firm as its ever been. When I’m looking for a phone number for a business, I google it. Sorry Yellow Pages, you are a relic of an age when telephones couldn’t play my favorite Tommy Tutone song.

To tell you the truth, I don’t have a favorite Tommy Tutone song. I actually had to look up who sang “867-5309” for the purpose of that joke. When I say “look up,” I mean I googled it.

Maybe some users DO prefer Bing to Google. I know a couple of people that do. But I know even more people that have said some variation of the following sentence: “Let me Google that for you.”

To be fair, Bing is in that same dictionary: it’s a heap, especially of metallic ore of waste from a mine.

Recently, Senator Tom Coburn of Oklahoma introduced S.2206, or as it’s known in the halls of Congress, the Let Me Google That For You Act. The bill would abolish the National Technical Information Service, a government agency of research professionals that provides reports to other government agencies.

Even though I would argue that the bill has been designed for the wrong reasons, I don’t necessarily oppose it. I do, however, find the name of the bill unnerving. Should I come to terms that Google is so firmly integrated into our everyday vernacular that it’s nothing more than just a word in a bill? Or is this an example of branded legislation?

Reading about this bill freaked me out even more, because the day before I read this Washington Post story about Google’s rapidly expanding lobbying influence.

Google is now the second biggest spender in Washington D.C. Only General Electric spends more on lobbying than they do. The $18 million+ that Google spends on lobbying may sounds like a hefty chunk of change, but the ROI potential is worth it. General Electric has benefitted greatly from its efforts to change the American tax code.

There are certainly a few reasons why Google would want to spend this insane amount of money on lobbying, reasons that extend beyond online search.

After all, Google is officially in the automobile business. Not your dad’s automobile, the kind your dad actually had to steer and navigate. Google has made autonomous cars. That’s a fancy way of saying cars that drive themselves.

This isn’t totally new. These cars have been tested dating back to 2011. Public curiosity has only been growing since.

Self-driving cars don’t sound as high-tech as you might think. When I first heard about Google’s new business venture, my mind went straight to this:

This is a still from Minority Report.

The autonomous cars produced by Google would not necessarily require new infrastructure (yet). They certainly wouldn’t require a fugitive Tom Cruise hopping around as if he were back on Oprah’s couch (yet).

Google may not have to build new roads; they will, however, have to digitalize them. I smell government contract bidding around the corner.

For now, the American highways have very few autonomous cars on them; it’s up to drivers to navigate the open roads. In the future, more and more car owners will own Google Glass. A portion of Google’s lobbying expenses have already been dedicated to fighting distracted driving laws.

But setting aside the revenue streams of tomorrow, Google already provides many more services than competitors like Bing and Yahoo. I wrote this piece on a Google doc. When I edited it, I was alerted of the edits that needed to be made via an email service provide by Google.

I point this out because even though Google doesn’t make nearly the kind of revenue from these services that could sustain their business, the fact that they offer such products beyond search gives them a heap of branding power. The more you use another Google product, the more likely you are to use them for search.

McDonald’s doesn’t directly make money from its playgrounds and Happy Meal toys. In fact, those are out-of-pocket expenses for the fast food giant. But as Eric Schlosser says in his brilliant book Fast Food Nation, “The seesaws, slides, and pits full of plastic balls have proven to be an effective lure.”

Google doesn’t only successfully brand itself to users and legislators; they also know to brand themselves to graduates/new job seekers. Maybe you haven’t heard, but Google is a pretty cool place to work.

Not only does this help to recruit the brightest minds of a generation to come work for them, but it’s part of a branding strategy as well. No one likes to buy from the bad guys when you can buy from the cool kids on the block.

I may be in disagreement with Rotten Tomatoes here, but I thought The Internship was a pretty funny corporate propaganda piece for Google. Google didn’t even have to pay for their Reese’s Pieces moment.

Bing has no such movie. DuckDuckGo has no such movie. Jeeves has been a character in many a BBC series, but he was never asked anything. The overwhelming majority of big brands don’t have Hollywood movies mades about their office environment. Who wants to see a movie about the day-to-day trials and tribulations at the offices of Shell Oil?

Sure, other movies and television shows have been made about workplaces. A common thread through 99% of these productions is that the workplace in question sucks/is boring.

Not only did Google get its own movie, the protagonists of the movie REALLY, REALLY want to work for Google. The whole plot of the movie revolves around them fighting hundreds of other interns to land a job at the coolest shop in Silicon Valley.

Why is this important? Because as long as Google consistently is able to recruit the top Ivy League graduates, they will stay dominant. Getting a job at Bing is nothing to sneeze at mind you, but I feel like working for Bing is the Silicon Valley equivalent of telling your haughty grandparents that you got into Brown as opposed to Yale.

There was another industry that made a point of recruiting the brightest and talented minds from the recently graduated classes of the Ivy League. That industry was the financial services industry, and they had a 2011 film made about their collapse.

Truth be told, I like Google. There are things they do that irk me to be sure, but I’m the kind of guy that reads corporate exposes recreationally, and Google is low on the my list of egregious corporate offenders. Having said that, they wield an unusual amount of power and influence, an amount that seems to only be expanding. Google is very much a young brand, compared to many of the corporations it holds residence with on the Fortune 500 list anyway. They’re only 17 years old, and as any mother will tell you, 17-year-olds can make reckless decisions. Sometimes 17-year-olds buy potentially destructive machines, say cars, and use them irresponsibly. So color me queasy about Google's purchase of mechanized cheetahs.

Or maybe there’s a new technology on the horizon that will render Google obsolete. It seems absurd to me frankly, but I’m sure my parents thought a phone that could take pictures and play music was an absurd notion once. Maybe all roads do come to an end eventually. I’m sure there was a time in the 90s when Enron fancied themselves as infallible. But they weren’t a cultural icon the way that Google is now. I had never heard of Enron when they collapsed back in 2001. Granted I was only 15 at the time, and a company like Enron wouldn’t be the part of the everyday routine for a fifteen year old. But when I wanted to learn more about the company’s downfall--I was nerdier even then than I am now--want to know what I did? I googled it.