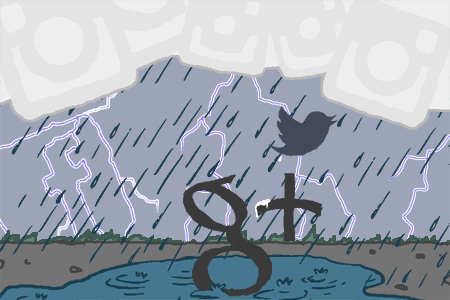 Google started out as a search engine in 1998. Since then, they’ve worked hard to become the leading tech company in a variety of areas.

They’re doing well for themselves. They consistently place on the Fortune 500 list. They are currently the second most valuable company in America. And oh yeah, Google is the world’s most popular website.

So why is it that Google can’t master the social media racket?

If you haven’t heard, Google decided to pull the plug on Orkut.

Truth be told, before the news, I knew very little about Orkut. If asked, I would have said it was the name of character on Game of Thrones (I don’t watch that show and you can’t make me).

The Demise of Orkut

Orkut is a social network that predates even Facebook… by a month. Orkut was launched by Google in January 2004, Facebook was launched the following February.

Since 2004, Facebook has enrolled over 500 million people to their site. The founding of their site was turned into an Academy Award winning film. It’s the second most visited website in the world.

There’s no credible information regarding the number of users currently on Orkut: Google has not released any such information. According to Alexa, however, it is the 7,564th most popular website in the world. Now, that’s pretty high when you consider the amount of websites that populate the web, but take a look at this graph: 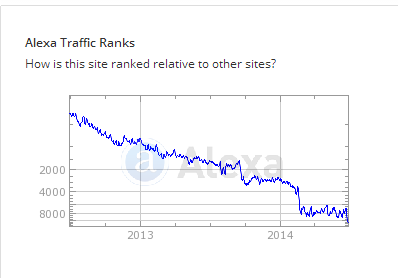 Orkut never was able to gain traction in America, but it was a powerful platform in Brazil and India, both of which rank in the world’s top ten economies. Naturally, you would think a business would be able to succeed on that alone, but then came Facebook.

Facebook was a domesticated platform for years, until Mark Zuckerberg started looking for outside investors with bigger ideas than an on-campus social network. Facebook overtook Orkut in both countries in the latter part of the aughts.

Now, Orkut is close to its final days. If you did not have an Orkut account before and you enter orkut.com into your browser, this is what you get: 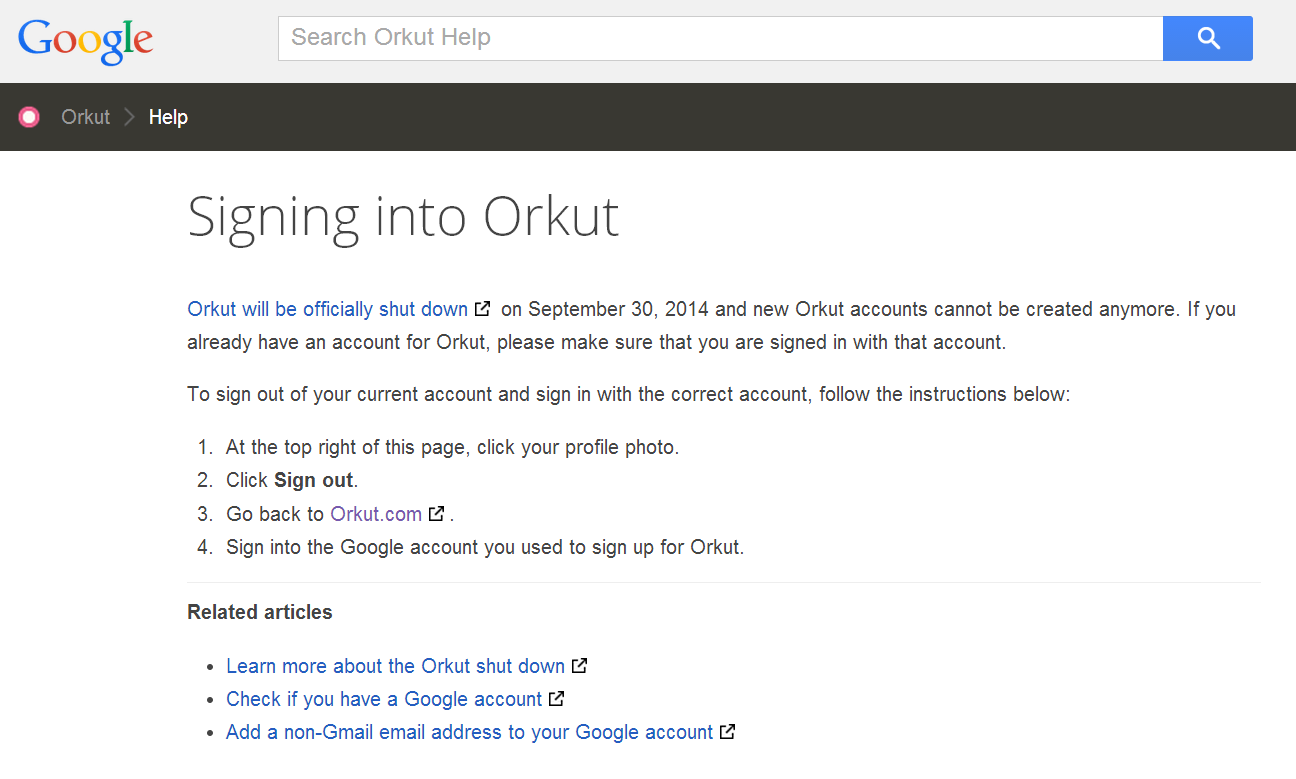 Google will not even permit new users on Orkut anymore.

Is This Because of Google+?

So what led to the demise? The obvious and most glaring answer would be that Google wants to spend more time focusing on Google+. That makes sense: Google invested $500 million into the platform, and it currently has more than one billion enabled accounts.

Don’t get too impressed with that number just yet. Consider this: I have two G+ profiles, one of which I have never touched. Why would I have it if I don’t ever use it? That’s because it comes attached to my personal gmail. Anyone who registers a gmail account automatically gets a G+ account with it.

Pew is one of the most well-respected think tanks and research institutions in the country. They conduct polls on everything from social issues to media use. Here are the results of a social media study they conducted recently.

Google+ isn’t even on here.

I’m not going to go as far as to call Google+ a failed social platform. It’s still in relative infancy compared to others, and it does get used. But I don’t think anyone could call it a smashing success.

Nor would anyone call Dodgeball a smashing success. In 2005, Google bought Dodgeball, a texting service that allowed friends, friends of friends and “crushes”--I’m 27 and I didn’t think I’d ever have to use that word again--to see where you were. It went under in 2009. Why did it go under exactly? I don’t know the answer per se, but I feel like they weren’t doing themselves any good with this logo:

Google swiftly replaced Dodgeball with Latitude, which was pretty close to being the exact same service, only this time Google were the inventors. Latitude ceased to exist in 2013.

Then there was Google Buzz. Rather than wholly explain what Google Buzz was, I want you to click on this link.

Google Buzz was essentially Twitter, just four years late to the party. Apart from the lack of originality, Buzz was widely derided for ignoring privacy concerns. When it was revealed that a woman’s abusive ex-husband was automatically added as one of her followers, it was a PR disaster, one from which Buzz never fully recovered from. Buzz folded after 22 months.

I’m familiar with the concept of failing until you succeed. I’m a stand up comedian by night, and I don’t mind telling you that it took me a few months before I had a set I was really proud of. At some point though, there needs to be a moment of self-realization. 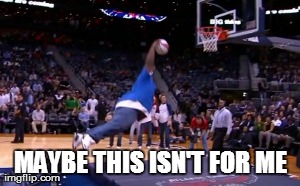 For whatever reason, Google just can’t seem to master the social game.

How can this be? Google is in the enviable position of being able to recruit the brightest minds alive to work for them.

It’s not because they were late to the party. Pinterest wasn’t launched until 2010, almost a decade after the start of the social media revolution. Today, it ranks as the 27th most popular site in the world (12th in America).

So here’s the truth dear readers: I’m legitimately stumped on this one. It would be irresponsible of me to take to this page and pretend as though I have the answer.

Maybe it’s an issue of priorities. Facebook is Facebook; it’s not a subsidiary of any other company, a sibling company to no one. The same goes for Twitter. Google+, however, is just one morsel in an extensive list of business ventures. But how do you account for the success of other products (gmail, chrome, maps)?

Maybe it’s a stigma. Perhaps the previous failures have led the public at large to believe that Google is hopelessly inept at engaging social. Yet--and I’ll concede that this is anecdotal--before I worked here, I had never even heard of these previous failures. Buzz was not even close to being on my radar.

Maybe, in that case, it’s bad promotion. I suppose this would tie in to G+ potentially being a low priority as well. Again though, I can’t convince myself that the issue is low visibility. Gmail has over 400 million users as of 2012. When you register a gmail account, this is the first page you see. 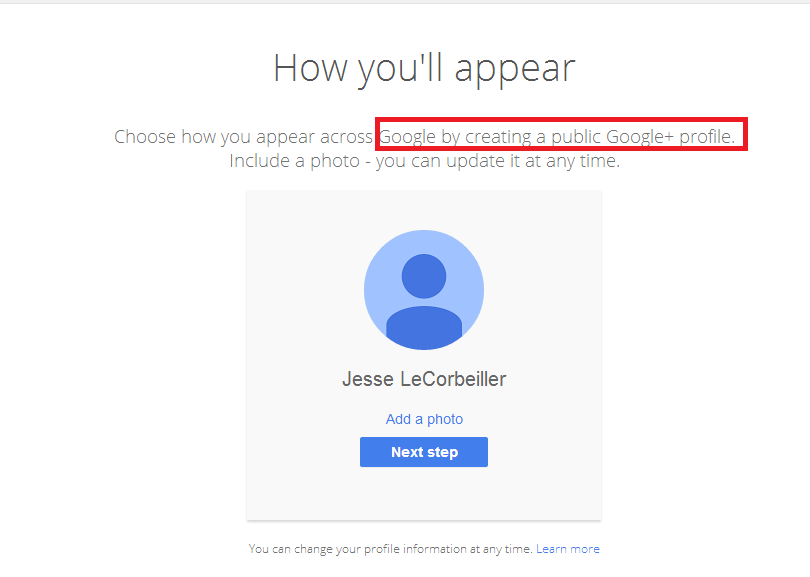 Maybe it’s because internet marketers ruin every social opportunity Google provides. The end goal of many internet marketers/SEOs is to make their sites visible on Google. Ipso facto, it makes sense to us to exploit any channel Google is providing us. And so maybe to the average social user, they don’t want to be overwhelmed by marketers.

Sorry, but I don’t buy this theory either. Google has explicitly stated that Google+ provides no SEO benefits, and I’m choosing to believe them on that. And if you think Facebook and Twitter aren’t overrun by marketers and SEOs, you’re deluded.

So I hate to come back to where I was before, but I really am stumped here. Why is Google so inept at social media? I would love to hear your thoughts dear readers.