It’s 3am and I’m painstakingly attaching rock candy to a pedestal I’ve constructed for Queen Elsa of Arendelle. My eyes are bloodshot and somehow I’ve gotten frosting in my hair.

This was supposed to be easy.

But this birthday cake, which has become a totem for my obsessive tendencies, would never be worthy of my daughter’s birthday party at this rate. Who would want to even try it when it looks so… unappetizing?

How did I get myself into this? Why did I think I could do it myself?

Let me back up a little.

My name’s Michele and I’m an Account Executive here at Page One Power. I’ve worked in marketing and sales since 2000 and graduated with an emphasis in advertising and promotion from USC’s Marshall School of Business in 2004. I chose this path because I know exactly what I’m good at: helping people make their business the best it possibly can be.

But I do so love a challenge.

Recently I made the transition from traditional marketing to online marketing. It’s taken mental adjustment, but the principles remain the same across disciplines. I’ve moved even deeper in online marketing, navigating the niche realm of SEO and link building. I’ll admit, link building is a new beast. Becoming familiar with the world behind search engines has been as difficult as it’s been rewarding.

Sometimes I feel like I’m getting to poke my head behind The Wizard’s curtain in Oz.

Many of the prospects I speak with share this feeling. They’re navigating the link building world like I am, except it isn’t their job to do so. And while I admire their moxie, I’ve learned the hard way that sometimes moxie is not enough.

Which leads me to that cake.

For my daughter’s second birthday, I made a Hello Kitty cake. It was glorious. 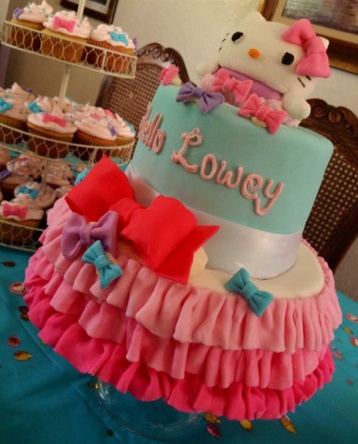 Every detail was immaculate, the fondant flawlessly smooth. One of my dear friends, Amber, is a professional cake decorator and had graciously guided me through the process. She showed me what tools to use and how, each technique she’d mastered over years of practice.

With Amber looking over my shoulder, I found myself to be an extremely competent cake decorator.

The result was a confectionary masterpiece. Not to brag, but it really was a hell of a cake. And because it was pink, made of sugar, and topped with her beloved Hello Kitty, it made quite an impression on my little girl, Lois. When asked what she would like for her third birthday party — anything at all — she immediately remembered the Hello Kitty cake.

“Will you make me another kitty cake?” she asked. “I loved my kitty cake.”

My heart swelled. And optimistically, foolishly, I decided I’d make her another glorious cake. How could I possibly say no? “Do you want a kitty cake or would you like something different? I can make whatever you want.” Mouth, meet foot.

Little Lowey’s eyes beamed and she exclaimed, “I want an ice palace cake!”

Lois, like every other little girl in the solar system, had become enamored with the Disney movie, Frozen, and its ice queen heroine, Elsa. It seemed like a doable request. Make a cake, make it look like an ice palace. Easy. After my Hello Kitty success, this would be, well, a piece of cake (heh).

I would have immediately called Amber for her supervision again, but unfortunately she’d just moved away. I was on my own this time. Cruising local bakeries, I considered biting the bullet and paying for a cake made by a professional. A shop nearby, A Little Piece of Heaven, caught my eye with their ornate decorations and flawless details.

But… 200 dollars or more? That was a little hard to swallow. I wagered to myself that I could make a cake just as beautiful for far less. Yeah, no problem!

Undaunted by the task before me, I chose a cake from Pinterest to be my inspiration: 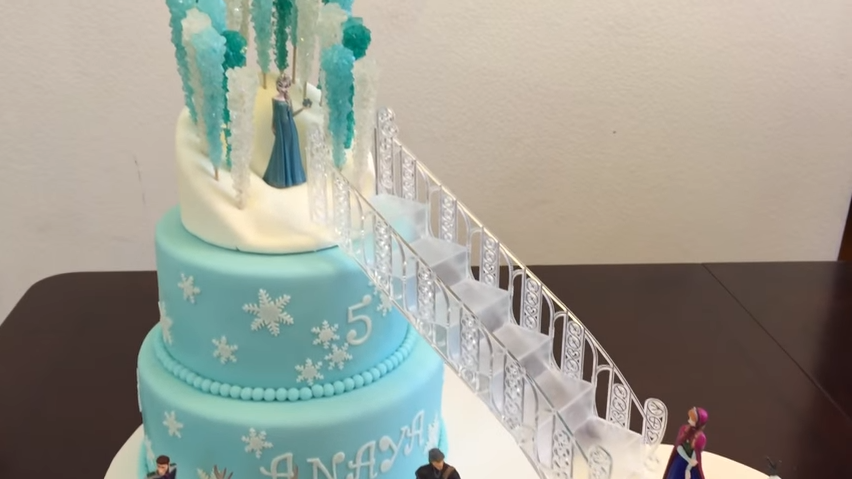 I went about gathering the same supplies I’d needed the year before: pre-made fondant, dyes, cake skewers for support, sculpting tools for decorating, all the ingredients, plus other items unique to this cake. Looking at my arsenal, I felt an overwhelming sense of confidence. I was already crushing it.

I’d planned out the week leading up to the cake and spent three late nights prior to D-Day carefully creating white chocolate snowflakes and painting them with edible shimmer. They were beautiful — and extremely fragile. 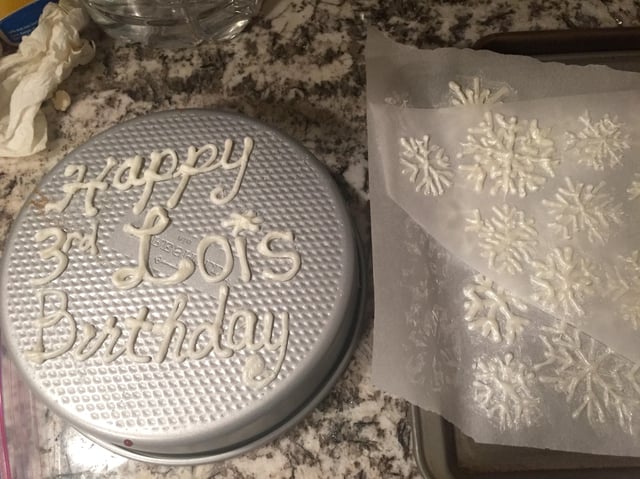 My confidence grew when the actual cake tiers came out of the oven moist and fluffy and delicious.  I was not so sure of the buttercream I was adapting from a Boston Cooking School cookbook from 1896, but when it too turned out delicious, I was further self-assured.

I liberally applied the buttercream frosting and fruit layers, which seemed to go on evenly and smoothly, lulling me into a false sense of security.

Then I rolled out and carefully laid down the first layer of dyed fondant.

To my dismay, the edges were uneven. As I pulled the edges straight, the fondant stretched thin over areas of surplus buttercream, leaving bare spots and bubbles that puffed into grotesque mounds.

I didn’t realize how long my battle with the fondant had gone on until past eleven. The fondant layer was still unfinished, and I needed to start on structural work soon.

So I recruited my (exhausted) husband, Patrick, (from bed) to help insert bamboo skewers to make the cake stable enough to stack on.

I repeated the process above for three smaller cakes (did I mention that I don’t do things by half measures?) and delicately stacked the layers, each of which also had too much fondant at the base. No worries: Just tuck it in/hide it under each level, right?

Wrong. The base of each layer looked like it left the restroom with its dress tucked into its undies.

It was already 1AM and I was just beginning the decoration process. Cursing it every step of the way I somehow lined the base of each layer, one-by-one, with edible beads.  But for every two I set, one fell off. This quickly became an exercise in abject frustration.

Next, cracks began appearing at seemingly random points along the corners. And each delicate snowflake I tried to artfully adhere to the mess either shattered immediately or damaged the fondant.

Standing back to survey my work, I realized that the entire cake was… leaning?!?! 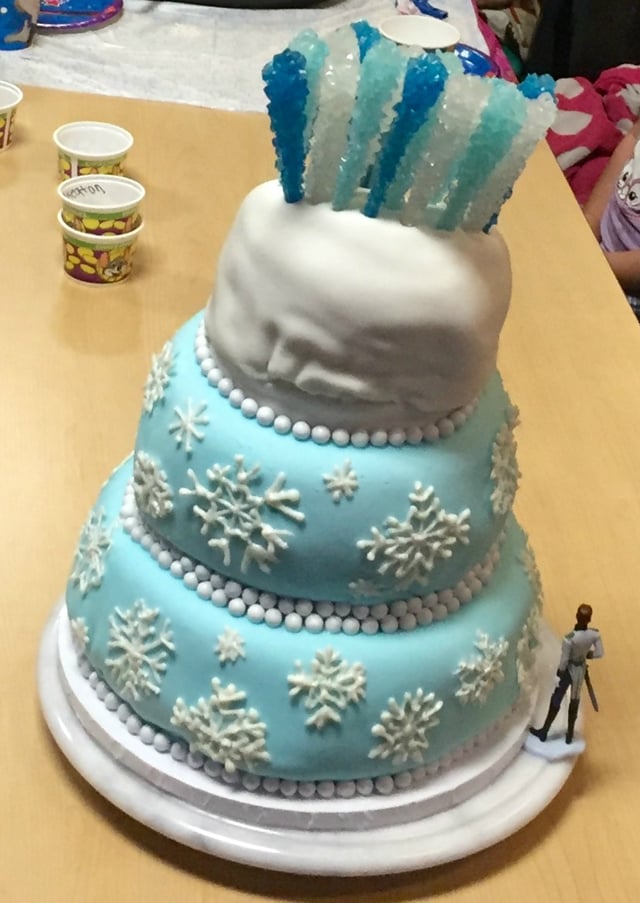 Trying to shift the cake more firmly into place tugged at the beleaguered fondant, causing more tears and wrinkles. Trying to cover the tears with other decorations caused even more damage, straining the unstable frame with each push and pull.

Before I knew it, it was nearly morning. I was doubtlessly going to be exhausted at Lowey’s party, where I’d be herding a giggling flock of little girls in princess dresses.

In spite of my research and planning and cursory experience, in spite of my arsenal of tools, something had gone horribly awry. Looking in dismay at my leaning, puffy, wrinkly attempt at a cake, I wondered: What had gone wrong? What was I missing?

The first time around, I had the skill and guidance of an actual professional cake decorator to help me. Despite having followed her instructions closely and memorized the list of tools I would need, I still didn’t have her expert eye catching the collection of little mistakes that had amassed into a rather big mistake.

And this lopsided ice palace was the result. 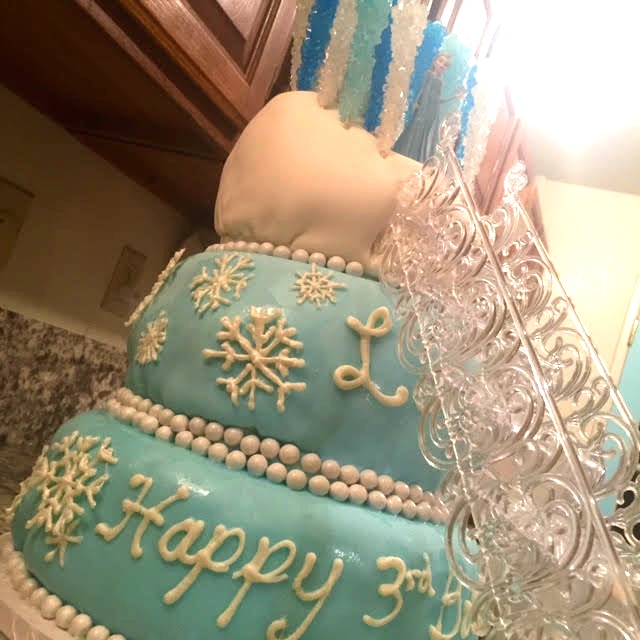 Luckily for me, the target demographic of my Frozen cake was a captive audience (and also three year olds). All they saw was Elsa in her sugary ice palace. They neither noticed nor cared about any of the flaws that bothered me so intensely.

And, in reality, my Frozen cake was actually a pretty impressive effort when it comes to homemade birthday cakes. Despite my fears, no one faulted me for the imperfections I’d been fixated on all night.

Lois loved her cake, even if it wasn’t professionally made. 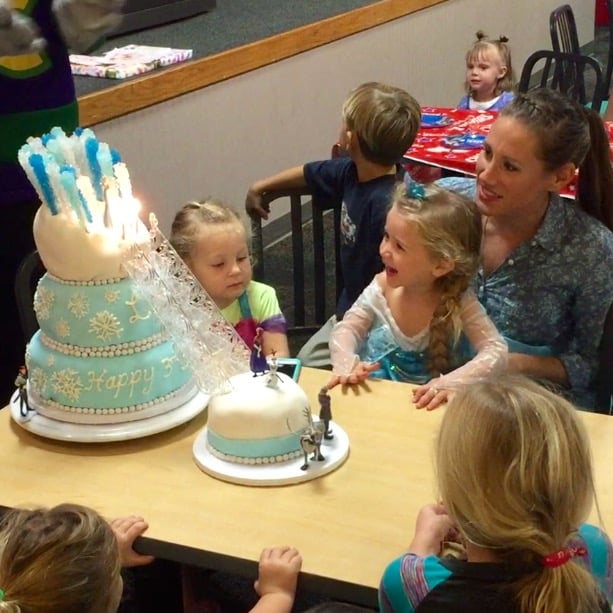 My homemade efforts impressed my 3 year old daughter (we’ll see if that lasts when she’s a teenager). But in the real world, there’s competition to stand up against. My homemade cake would have been blown out of the water by a professional one.

In my career helping prospects understand the value of SEO, link acquisition, and online marketing, I often meet the do-it-all-myself business owner or marketing manager.

I respect the hell out of them. Who can fault them? Especially with online marketing, there is often a mentality of “I can do this myself”.

But standing at 3AM, with frosting in my hair, I came to appreciate the difference a professional makes.

When it comes to the business world, no one will give you leeway because you tried your best. You need to actually have the best to attract the attention of strangers.

I still lament the days I labored and the anxiety (oh, the anxiety) over that cake. And the 200-dollars I refused to drop on a professional cake? Between materials, tools I’ll likely never need again, and the hours I spent working with icing instead of with leads, that Elsa cake cost me significantly more.

All I really wanted was to enjoy my daughter’s only third birthday. What did I get instead? A leaning cake, hundreds of dollars spent, and no sleep.

While my daughter will hopefully look back fondly at the brave effort her mother put in for her Elsa cake, trust me: No one on the web will feel the same way about your website.

Sometimes it pays to hire the professionals.

Michele Chesley is a former Account Executive at Page One Power. Her commitment to her clients is matched only by her attention to detail (and her love of cake). You can connect with Michele on LinkedIn.