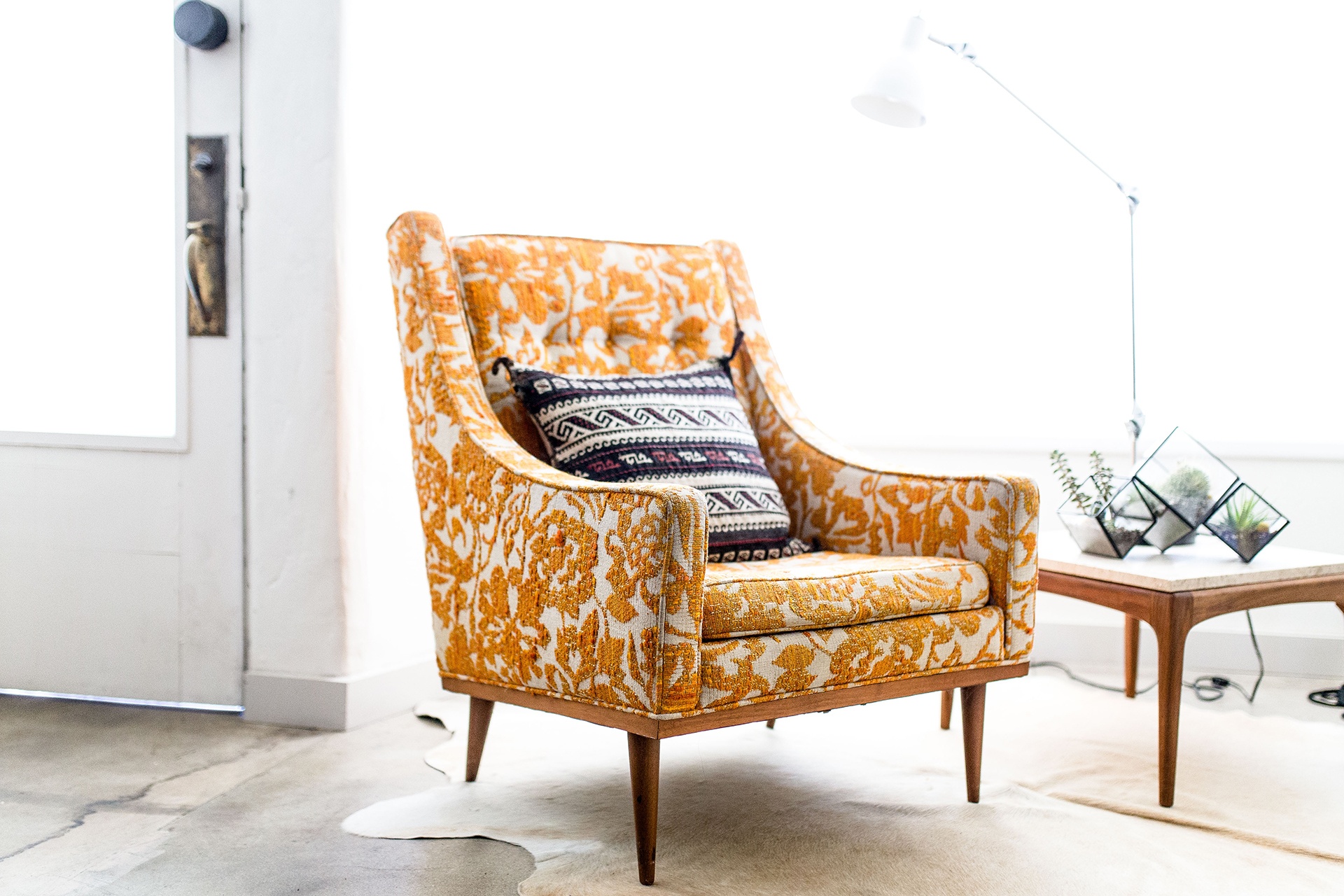 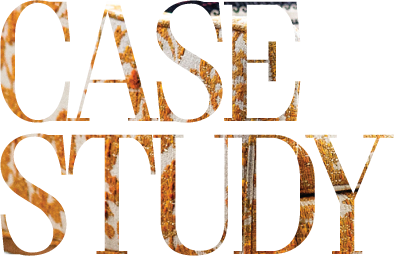 The client for this project was Bedly, a company that provides short-term leases for accommodations and housing. Bedly was a new company with a new website (launched around June 2017) and their campaign launched in September 2017. Bedly initially contracted Page One Power for link building training, but realized that link acquisition was too involved for their small team and purchased a custom link building campaign.

Page One Power secured Bedly’s first set of links in October and saw tremendous keyword growth for the following months. By the end of 6 months, Bedly’s top-100 keyword rankings had increased by 9,000%!

BEDLY WAS A YOUNG, VENTURE-BACKED COMPANY WITH A BRAND NEW WEBSITE WHEN THEY LAUNCHED A LINK BUILDING CAMPAIGN WITH PAGE ONE POWER IN SEPTEMBER 2017.

At the time of launch, Bedly’s online marketing budget was heavily invested into paid search channels. Their website was only ranking for a handful of irrelevant terms that were based on the limited content on their site, and Bedly wanted to test the potential of organic search with minimal investment upfront.

Bedly’s project posed unique challenges and opportunities since their site and brand were so new. While the campaign faced an uphill battle in terms of building authority, Bedly didn’t have the same “red tape” as more established companies which provided more access to influencing content and onsite strategy. 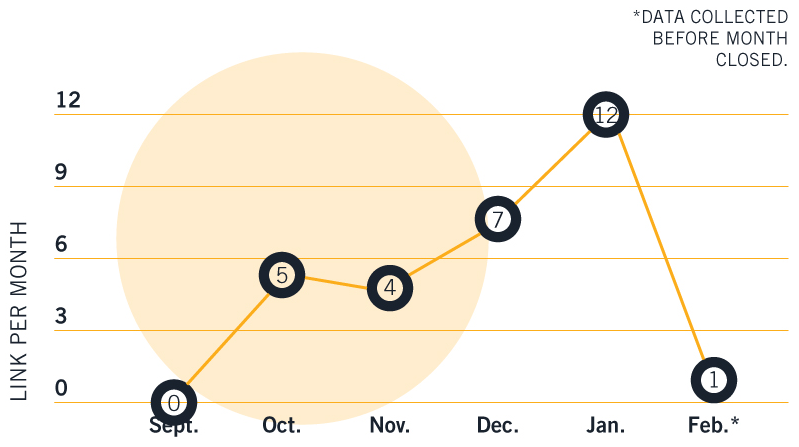 Over the course of 6 months we guided Bedly’s content creation and leveraged this content for links — 30 links in total.

Our content consultation empowered Bedly to build pages that strategically targeted the top of their marketing funnel. This is the portion of their audience that are still in the “awareness” stage, looking for more information on broader topics related to Bedly’s brand.

We began this process by identifying Bedly’s target audience and personas. After identifying these personas we highlighted topics and themes that were important to these potential customers and guided Bedly through the process of crafting compelling content that addressed these topics.

For example, topics about finding good roommates were relevant to Bedly’s business and targeted important top-of-the-funnel keywords like [apartment roommates] and [new roommates].

By partnering this consultation with our link building service we were able to secure worthwhile links that fueled keyword growth and rankings improvements.

Bedly saw a steady growth in terms of keyword rankings of the first 6 months of their campaign. The graph below shows the keywords acquisition timeline, with the next illustrating how that directly coincided with link building success. 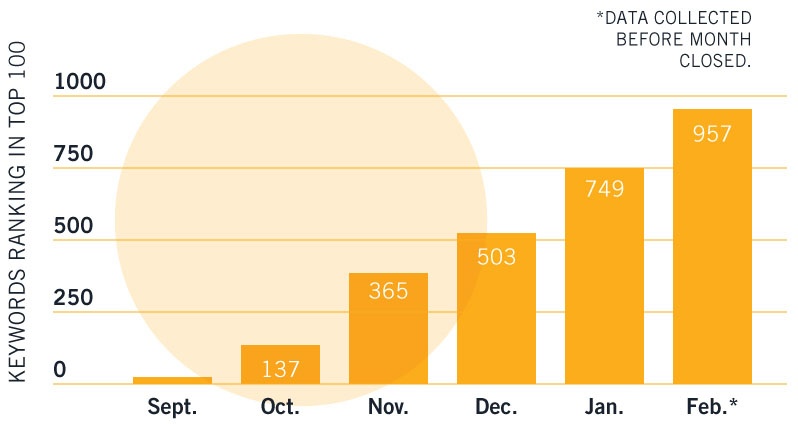 Bedly was a young company and website, and the majority of their online marketing budget was invested into paid search, which meant they had very little organic presence.

Not only did Bedly experience tremendous growth in keyword rankings overall, but this was targeted growth that influenced their most important keywords.

When the project began, Bedly was essentially starting from ground zero in regards to keyword rankings. They only had 7 keywords ranking in the top 100 (which came from an irrelevant blog post) and had no firm strategy for growing meaningful keywords.

However, as we were able to guide Bedly’s content creation their homepage started to see vast improvements in rankings for their important keywords.

For example, [short term lease nyc] — a hyper-relevant term to Bedly’s business — was ranking in the top 75 by the end of month six after not ranking at all when the project began. This positive movement projected future growth for Bedly with continued investment in link building.

The overall keyword growth that Bedly experienced was a strong signal that their site was growing in authority and visibility. However, in order to benefit from increased traffic a website needs to crack the top two pages of search — Bedly also saw results here.

After having zero keywords ranking in the top 20 spots on Google when the project began, Bedly possessed 50 top-20-rankings at the close of six months. 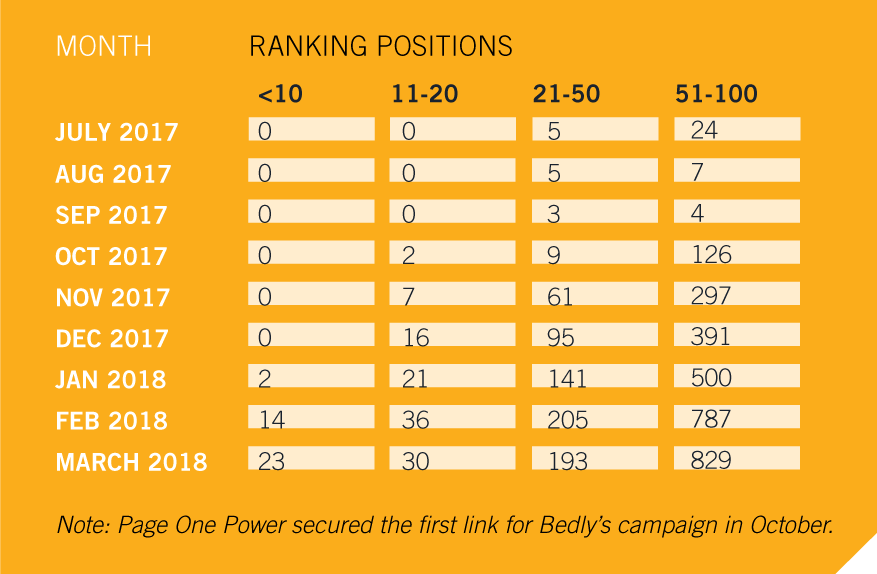 The trends established by the overall keyword growth Bedly has experienced indicate that these top-20-rankings will continue to grow with further link acquisition.

WANT TO BE OUR NEXT SUCCESS STORY?

Page One Power is a results-focused link building firm.
We’re not satisfied meeting link quotas — we want to grow keywords, rankings, and traffic.

CONTACT US TODAY TO FIND A CUSTOM SOLUTION THAT WILL HELP YOUR BRAND ACHIEVE THESE RESULTS AND MORE.